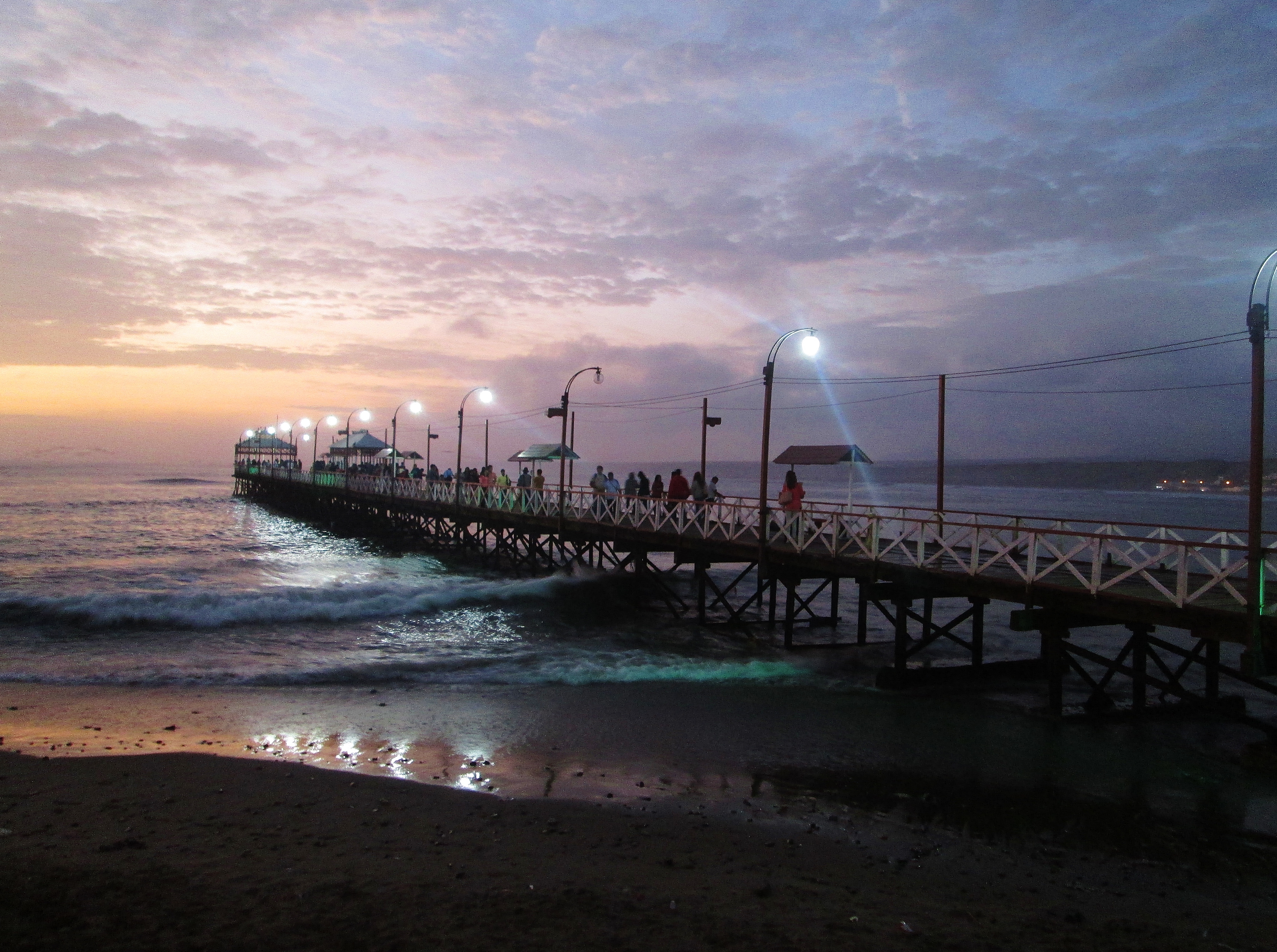 Huanchaco: ‘carefully balancing the chilled backpacker scene with the centuries-old traditions of a fishing community’.

As one of just five World Surfing Reserves located around the globe, and the only one in South America, it’s obvious what the majority of Huanchaco’s predominantly young and international visitors come for. However, the small town can offer a lot more. Located just next door to bustling and modern Trujillo it’s perfectly positioned to explore some of the more ‘off-the-beaten-track’ northern sights of Peru, whilst itself carefully balancing the chilled backpacker scene with the centuries-old traditions of a fishing community. Just be careful when planning your travels – if the vida huanchakera draws you in, you don’t know how long you might end up there for…

Peak season in Huanchaco is during the Peruvian summer months, particularly December and January, when temperatures can reach as high as 35 degrees. During the European summer period temperatures will drop and a covering of grey cloud will set in, but days can still be pleasantly warm and due to the desert climate you are unlikely to ever see rain.

Compared to European destinations Peru is very cheap and Huanchaco doesn’t buck that trend. Hostel rooms are normally available for 20 soles (around £4) or less and you can catch a combi (public minibus that can be flagged down in the street) into the centre of Trujillo for just 1.50 soles (32p). Look out for the menú at lunchtime in many restaurants which will often offer two courses and a drink for 8 to 10 soles (£1.70 to £2.10), although even if you choose to eat a la carta you are unlikely to pay more than 25 soles (£5.30).

Huanchaco itself only really has one main attraction for the tourists: its surf. For beginners or those looking to hone their skills there is a wide range of good-quality surf schools along the seafront, and these will also rent boards and wetsuits to those wanting to practise on their own. For the less active, sitting on the beach and watching traditional fishing in caballitos de tortora (reed boats) is a good alternative!

Whilst in town it is also worth taking a walk up to the church, said to be the second oldest in Peru, for sweeping views over Huanchaco and the ocean which are best appreciated at sunset. The pier can be entered too for just a small fee, offering a different perspective of the beach and seafront.

If you can’t draw yourself away from the coast and decide to stay longer, volunteering can be a great way to get to know the local community and give something back. Low-cost options in the area include the UK-run charity Otra Cosa, which offers a diverse range of opportunities through coordinating with small local NGOs as well as managing its own projects.

Whilst Huanchaco may be the perfect place to head to the beach with a book or a board, it also offers a great opportunity to explore Peru’s less-visited northern attractions.

Located just a short bus ride away from the town you can find the Chimú and Moche ruins of Chan Chan and the Huaca de la Luna, the former of which is the largest pre-Columbian city in South America. Both are fascinating ancient sites which are best explored with a guide who can expand upon the country’s complex history, leaving you to just admire the stunningly well-preserved artworks.

For those still keen on history and who like early starts, head further afield for a day in Chiclayo where you can visit the museum dedicated to the Señor de Sipán, compared to the British Museum for the quality of its collection, before heading over to the tomb itself.

If you have a long weekend to spare and are looking for more than a daytrip, Trujillo is a major stop on most bus routes through northern Peru. Still dissatisfied surfers and beach bums might like to make their way up the coast to Máncora for year-round sunshine and seemingly endless golden sands, whilst those looking for a change of scenery should head to Huaraz for glaciers and mountain trekking. Cajamarca is worth a visit for its famous thermal baths and cheese, and Chachapoyas cannot be missed as a base to explore Kuélap (the ‘Machu Picchu of the north’) and to swim underneath Gocta, the world’s third highest waterfall.

Huanchaco plays host to a wide range of small restaurants offering traditional Peruvian fare, including ceviche (raw fish cured in lime juice) and a lot of rice and potatoes! Marcia presents a very good value menú at lunchtime which includes all of the classic dishes, and small stalls are also often found along the seafront selling different plates.

If you’re looking for a taste of home, El Generoso has the best burgers in town and My Friend serves up an impressive range of spaghetti options. Otra Cosa restaurant has to be your first stop for organic vegetarian cuisine, and the range of desserts in the café Chocolate is not to be sniffed at. For sweet treats on the go, the chocolate cake at Dulci Nelly’s just can’t be beaten…

Partly due to the year round influx of backpackers, Huanchaco has more nightlife on offer than would normally be expected of such a small town. The restaurant My Friend has a good value cocktail ‘Happy Hour’ deal until around 11pm, making it a good place to begin a night out, which can then be followed by Jungle Bar or Mamachas. Just be warned – there are two Mamachas that open on a rotation basis, so check which one it is that night before heading out! Both venues will play predominantly Spanish language music and are particularly heavy on the salsa, but if you’re female then there’s certainly not going to be a shortage of local men to teach you the moves! Jungle Bar also often offers live music to get you up and practising. For the night owls out there, Cherry’s on Los Pinos is the latest place in town to serve alcohol, as well as selling burgers for the walk home…

Huanchaco is best reached via a bus to Trujillo, which from Lima can take around eight to nine hours and cost 90 soles (£19). You can then take any combi marked ‘Huanchaco’ into town for 1.50 soles (32p) or a taxi for 15 soles (£3.20). If catching a bus from Trujillo, be sure to remember which bus company you have booked with as – despite recent efforts to move all companies into a new bus terminal – many still operate out of their own private offices.

Once you’re in Huanchaco everything can be reached on foot, although mototaxis (a covered motorbike with seats on the back) and combis are available to take you into the surrounding shanty towns for less than 2 soles (43p).

Huanchaco itself is a safe place to stay, although it is obviously wise to exercise normal caution with regards to your belongings and walking alone at night. It is best to avoid being on the beach after dark, as well as taking unmarked taxis as people have been known to have their bags stolen.

One important point to note is that although there may be high cocaine usage amongst Peruvians on nights out, the authorities will take a very different view of this if a tourist is caught doing so. Drugs penalties are strict in Peru, and that one night is definitely not worth the spell in a Peruvian prison!