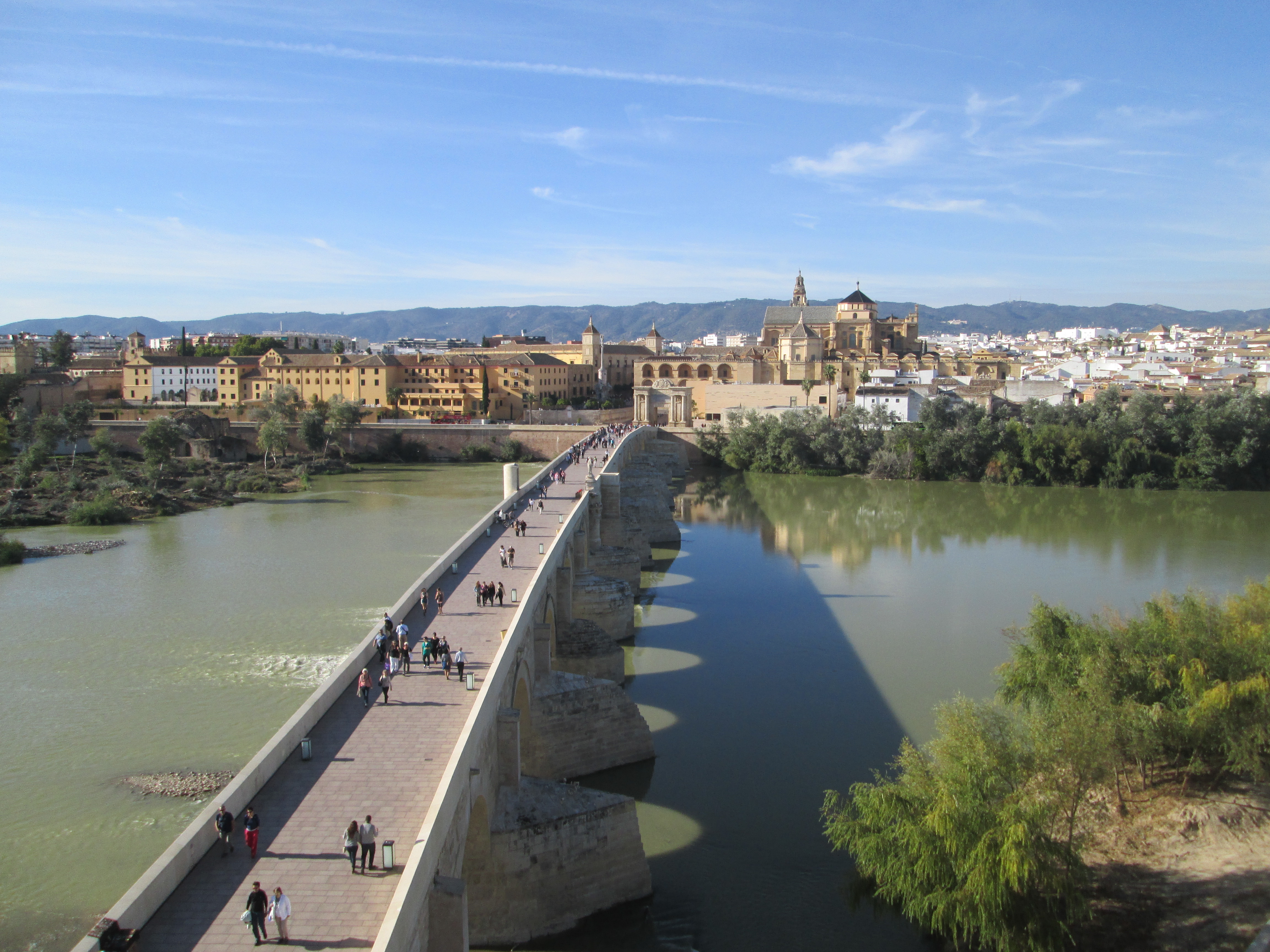 When faced with the city of three cultures, combining thousands of years of integration and opposition into one laid-back location with a buzzing underbelly, the obvious question actually seems to be: why not? Come for the Arabic food, the Roman architecture and the Jewish art forms, and then stay for the festivals, the friendly people and the hidden life under the tourist’s surface. Just one day can’t do this city justice, so plan to stay for a weekend to really get to its heart, although you may just be pulled in for longer visit…

Córdoba becomes stifling hot during the traditional Spanish tourist season of June to August, with temperatures often rising to above 45 degrees and locals escaping to holiday homes or their air-conditioned living rooms. The best months to visit are during spring when the city comes to life and flowers and orange trees blossom, with May in particular presenting non-stop festivals (and non-stop drinking) ranging from the Crosses of May and the patios contest to the feria and its accompanying botellón.

One of Córdoba’s key advantages must be its price, with the economic crisis having made everything startlingly cheap for tourists. It may be slightly more expensive to arrive at than other locations due to its lack of an airport, but once you are there you can expect to be able to buy a tapas meal and a drink for 10 euros or less. Glasses of wine can cost less than 2 euros, with beer at 40 cents in Mercado Provencal, and this will also often include a free snack. Be sure to check online beforehand too for free opening hours at certain monuments, as well as for free events.

The obvious sight to head for straightaway is the famous Mezquita Cathedral (free Monday to Saturday 8:30am – 9:30am), with its stunning Arabic arches and juxtaposing architectural styles. However, there’s a lot more to the ‘ciudad de encuentro’ than is immediately obvious to the day-tripping tourist! The Alcázar plays host to unmissable gardens as well as offering panoramic views over the city from its towers, with the Roman Bridge lit up at night the perfect location for an unforgettably romantic walk. Make sure to get lost in the winding streets of the Judería, checking out the Zoco craft market along the way, before taking a break in the tranquil Jardines de Orive. The Palacio de Viana (free Wednesdays 2pm – 5pm) is the best place to see Córdoba’s traditional patios in all their floral glory if you’re not in town for the annual contest, and the stunning Plaza and Posada del Potro are must sees for anyone with an interest in Cervantes or flamenco.

With Córdoba so well connected by the AVE and other train and bus routes, cities such as Sevilla, Málaga and Granada can easily be reached by public transport for a whistle-stop urban day out. However, all of these cities have so much to do in their own right that they deserve an overnight stop if you have the time in your itinerary.

To stay closer to town, Córdoba can be an excellent base for nature lovers to engage in some hiking and cycling. Shorter routes include the uphill trek to Las Ermitas which can be started from the city centre, leading up main roads before you hit a well signposted dirt track to eventually arrive at stunning views of the urban area and surrounding countryside. The Vías Verdes can also be accessed with ease, providing a whole network of flat cycling routes throughout some of the region’s most dramatic landscapes. In the Sierra Morena there are a wide range of hiking paths which can easily be found online and reached using local buses.

If you’re interested in history, the award-winning museum at Medina Azahara is an important stop, and there’s even a convenient twice daily shuttle bus from the city centre. After watching an interesting documentary you will be whisked by bus up the hill to explore this sprawling ancient city which is still being uncovered, offering an unparalleled insight into life and power relations during the age of Al-Andalus. The neighbouring reconstruction of the Castillo de Almodóvar also offers brilliant views and a lot of information, although a visit is not recommended on Sundays as infrequent buses make the return trip difficult and leave you liable to be stranded for several hours in a very sleepy village…

Córdoba plays host to a whole range of restaurants and bars to suit every budget, but the predominant theme is tapas with very little in the way of international cuisine offered. If you’re a penny-pinching backpacker, or anyone else for that matter, you can’t leave without trying Spain’s most delicious and physics-denyingly-huge tortilla de patatas in Bar Santos next to the Mezquita, best eaten whilst people watching in the adjacent Patio de los Naranjos. If you’ve still got some space left after that, Deloreans is the place to go for traditional tapas which are free with a drink and can be eaten in the company of a range of Back to the Future posters. Moriles Pata Negra in Ciudad Jardín serves up large plates of great tapas which when shared work out surprisingly cheaply, and the tabernas Las Salinas and San Miguel are good bets for assured quality although at a slightly higher price. For a slightly more modern and innovative take on classic recipes, try La Flamenka in the Judería which also offers the attentive and friendly service which is often difficult to find in Spain.

Although Córdoba doesn’t offer the country’s most varied drinking scene, there are plenty of locations to make for some great nights out. The fiesta won’t truly begin until at least 1am in Spain so start off with some quiet drinks in the extensive Plaza de la Corredera or on sofas under the atmospheric fairy lights of Mercado Victoria. From there, if you fancy a more traditional clubbing night head to Gongora for chart Spanish dance music until the early hours, or Sojo for a rooftop bar experience with great views. However, if you are after something more alternative then Automático and Soul are the places to be, with a hipster clientele and a mixture of different genres from indie to chart until around 4am. Be sure to check out their schedules for live performances! To get even further off the tourist path, try La Buhardilla for eclectic music in an attic-type setting, or for the international student scene head to the ever-packed Irish pub Banagher’s. To end the night when the other bars close, make a stop in the conveniently central Long Rock which does what it says on the tin until the sun comes up and beyond.

Due to its small size, the principle method of transport in Córdoba is walking, meaning that you get the chance to both save precious money and bask in the relaxed street atmosphere during your trip. If visiting at any point other than winter, you’ll also be glad to avoid the heat of the packed buses!

The only disadvantage is the city’s lack of an airport, although this is easily rectified by the proximity of Málaga and Sevilla. This situation could even be seen as an advantage as it discourages some of the less adventurous tourists! That said, Córdoba is very well connected for travel to and from other parts of Spain with plenty of national bus routes and the AVE high-speed rail network passing through, making it the ideal location to include within a tour of the country.

Córdoba is a very safe city so you are unlikely to experience any problems even when walking the streets at night. However, during the day it is advisable to be wary of gypsies asking for money in exchange for herbs or palm readings, especially in the area of the Mezquita. This is difficult to get away from once a conversation has begun so approaches are best rejected firmly, especially as they may also be a distraction for a pickpocketing. Tourist-orientated shops and restaurants in this area are also not recommended as many deliver lower-quality products at higher prices than alternatives that can be found at just a short walk.