It’s a lazy Wednesday afternoon, one of the days when the idea of doing readings is just not your fancy, and it’s too cold to go outside. So instead, you launch Google Earth and type “Hong Kong” in the search bar. You watch as the virtual globe spins halfway across the world to a tiny red prick on China’s south-eastern coast, and click on the little man figure at the bottom right corner of the screen. You put him wherever you want, perhaps right where the red prick is, at the center of Hong Kong. “Woah,” you might think to yourself, as you take in all the tightly packed high-rise buildings, throngs of people and rows of cars that seem worlds away from the quiet town that is Durham. “What is this place?” Something flashes into your mind. Hong Kong, the financial center, the commercial port. Hong Kong, the city of protests that made international news last year. 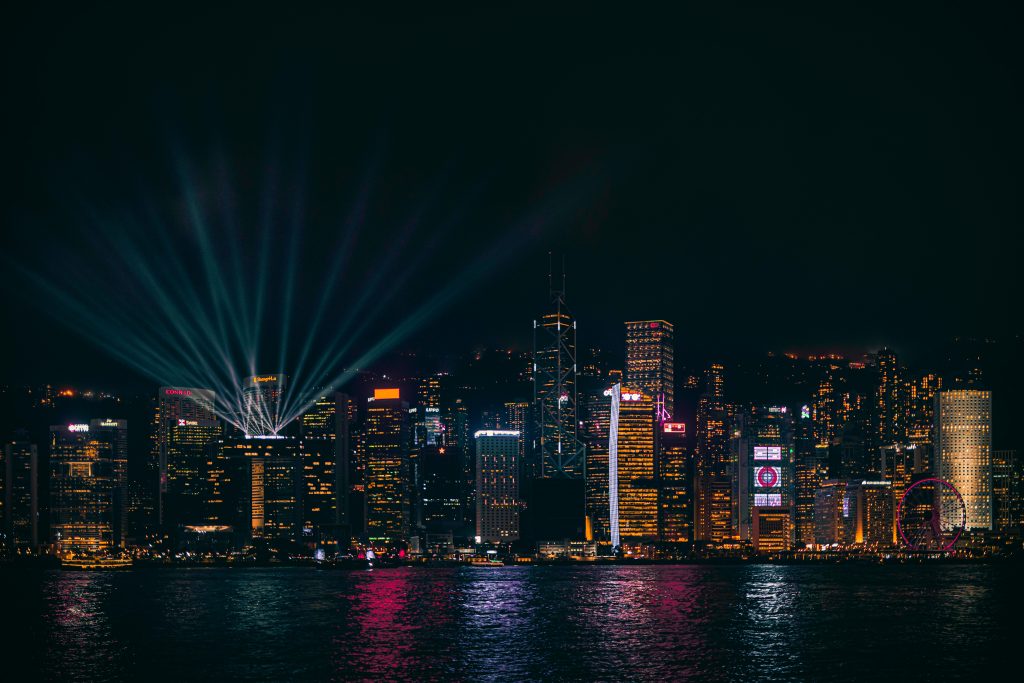 The glowing lights of Hong Kong, image by Aleksandar Pasaric on Pexels.

That’s my home city on your computer screen, a place that lives in the headlines and seems forever associated with the image of posh businessmen strutting in and out of office buildings. Yet, there is something about this city that a frozen image on Google Earth doesn’t really capture, an image which thrives behind the words of a Guardian article. After all, home is more than a name, a photo or a place. It’s also a feeling. Perhaps to me, no words or pictures capture the sensation that comes to mind when I think of home: the curious juxtaposition that animates Hong Kong and its people.

Hong Kong is a city that seems to glow with vigor and never sleep. During the day, the streets are alive with people: students, hurrying back to school along Jordan Road with the end of lunch hour, or perhaps businessmen, weaving their way through the numerous footbridges of Central or Admiralty, on a journey to the Stock Exchange or back to their offices. As the sun sets and rush hour arrives, hungry and tired commuters jostle in the struggle to get into a train carriage, while the passengers inside push each other for a few more inches of space, making the phrase “packed like a can of sardines” seem like an understatement. With the fall of night, the lights on the buildings that line the two sides of Victoria Harbor create a continuation of the day as they light up the dark, glassy water below them with pink, purple and yellow hues. 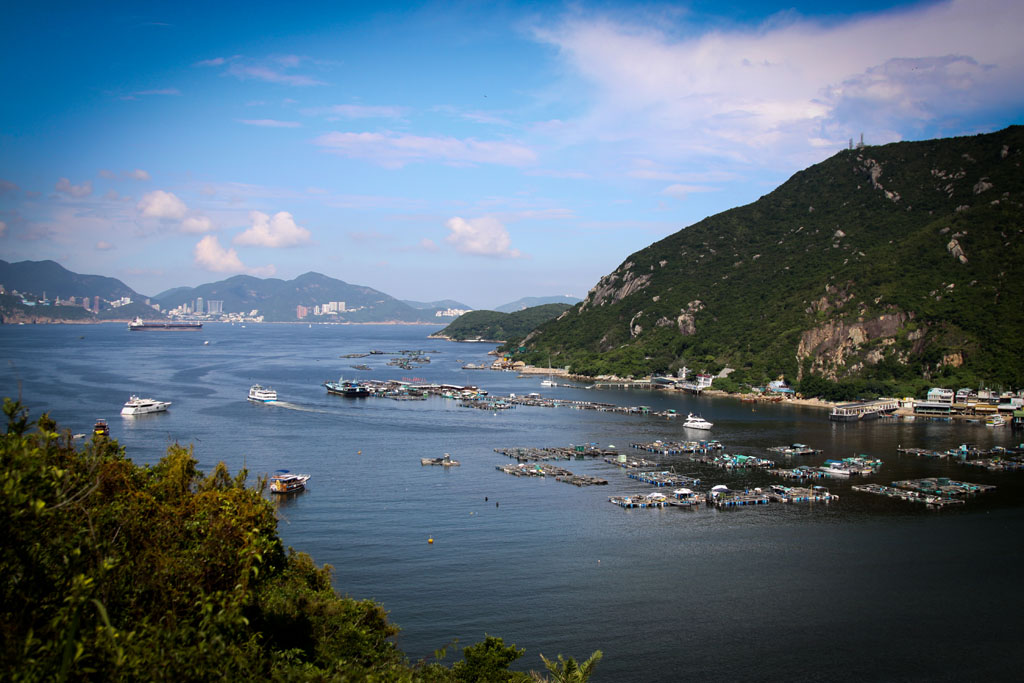 Yet, tucked away in secluded pockets, part of the city has perhaps remembered its past as a sleepy fishing village. A few steps away from the skyscrapers and offices of Admiralty, the trams on the main road provide a quick getaway from the fast rhythm of the city. On a warm day in April, a soft breeze can be felt through the open windows, as the tram produces a merry “ding ding” sound and rattles slowly along the coast of Hong Kong island, oblivious to the roar of transport that shares the road beside it. And a thirty-minute ferry ride away from Central Pier is Lamma Island, a tiny island with lush vegetation and meandering streams, where small fish farms float lazily in a sheltered bay and fishing boats bob gently on the waves. 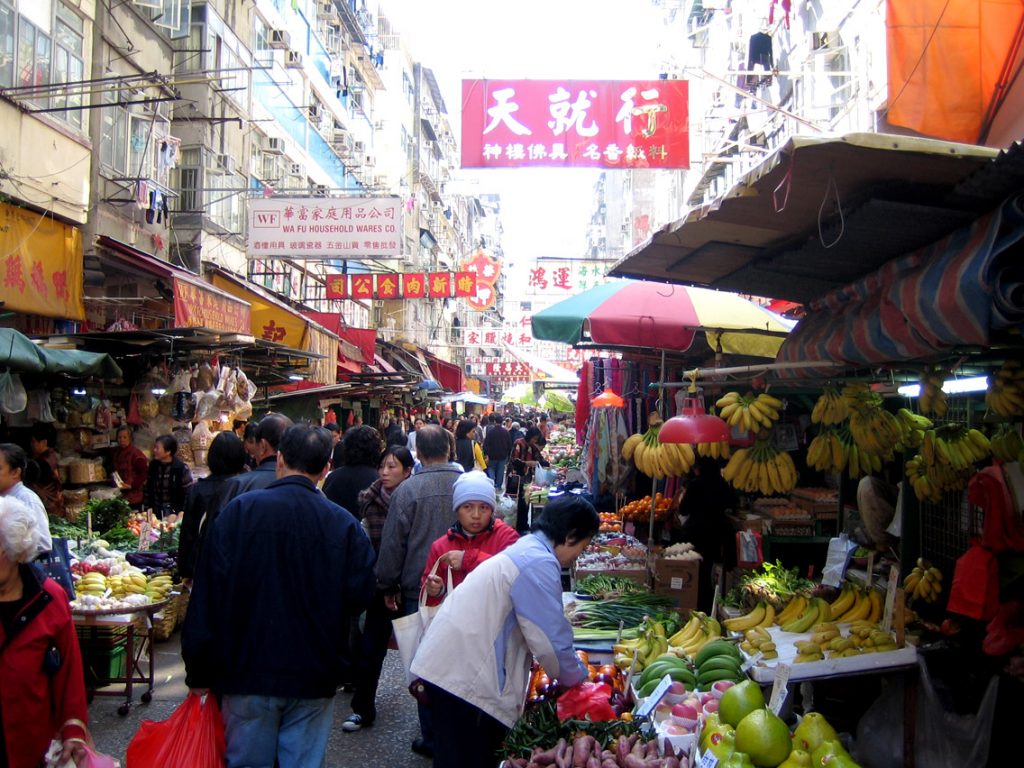 One of Hong Kong’s many food markets, image by atharabidi on flickr.

There are also the middle-aged housewives, colloquially known as see lai, who spend 10 minutes haggling with ferocious tenacity for the vendor to lower the price of dried seafood at a market at Lau Fau Shan. There are the waiters of cha chaan tengs (local style cafes), who crossly remind customers to hurry up with their egg tarts, and waste no time in preparing the table again for the next person after they are done. But amidst those who choose to live their lives in a hurried, fast paced manner, there are also those who choose to take life one step at a time and let time flow slowly. During the weekend, the Mount Parker Road Green Trail is dotted with hikers chatting leisurely with each other during a break in a pavilion, or casually snapping photos of the wild boars that occasionally cross the path. In the historical area of Kowloon City Walled Park, an old man, a former inhabitant of the area, can often be found sitting under a tree creating paper art, and he offers personal anecdotes to the occasional visitor who is interested in knowing more about the past.

A contrast between vibrancy and tranquility, excitement and calm, seems to hang between these snapshots of memory of this city. But in one curious way or another, this chiaroscuro works in harmony instead of conflict, like contrasting colors on a painting, where the vibrancy does not diminish the tranquility, and the calm only serves to accentuate how exciting the city can be. Lamma Island, fully packed train carriages and peaceful hiking routes exist in tandem in my mind, yet never seem incongruous. This is, perhaps, the picture that comes to me when I think of Hong Kong. A picture that lives beyond a ten-word newspaper heading, or a static Street View photo. A picture I call Home.