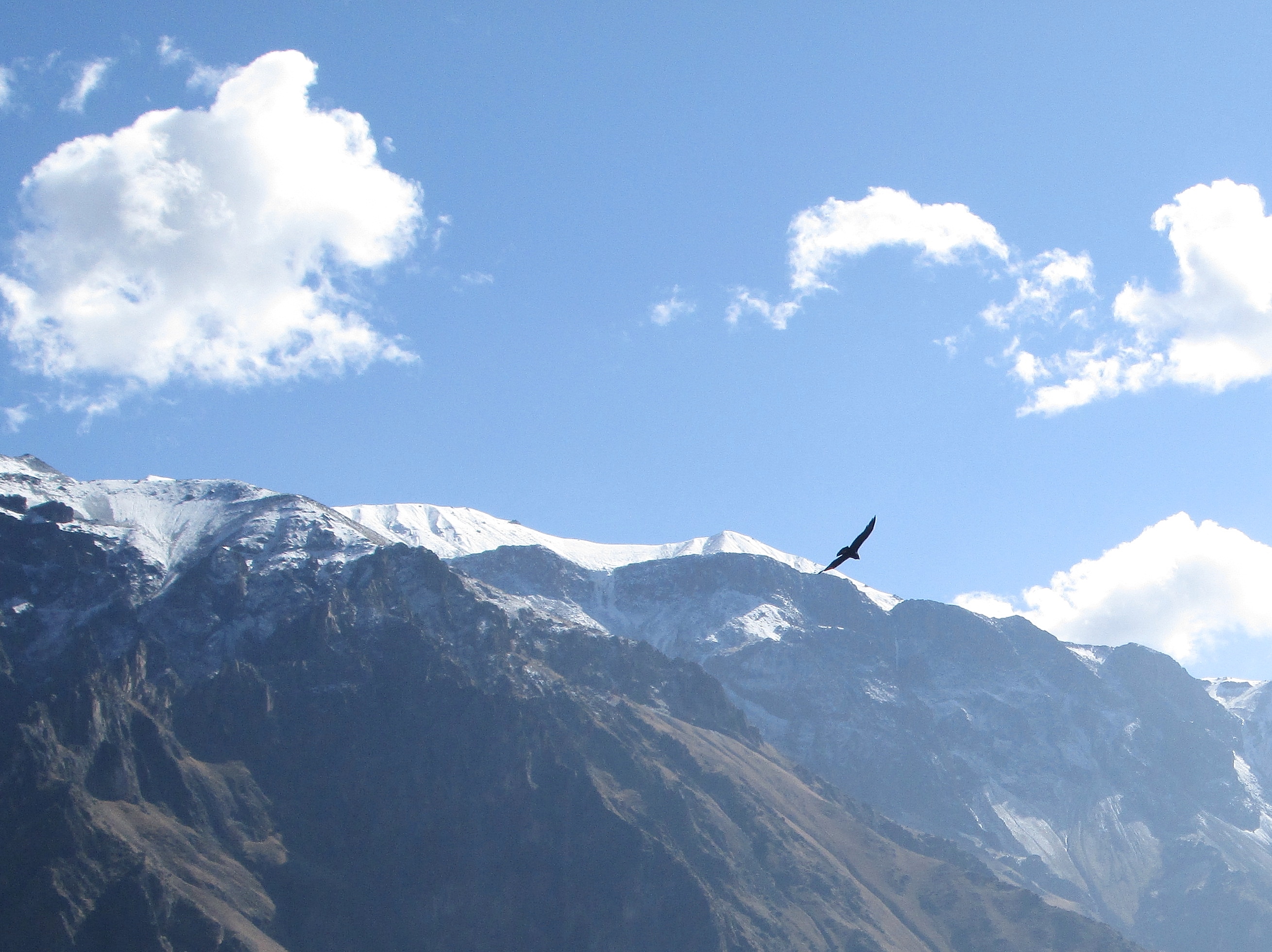 A condor soaring over the Colca Canyon.

So, in you made it one thousand kilometres from Lima to Arequipa, taking in everything from adventure sports to archaeological sites and wildlife along the way. But the ‘Gringo Trail’ only gets better, and you’ve got plenty more exploring to do as you leave big city life behind for now and exchange it for some of Peru’s most beautiful scenery.

To get there, you’ll first need to take a trip outside of Arequipa, driving northwest until you hit the Colca Canyon: the second-deepest canyon in the world, twice as deep as the United States’ Grand Canyon. Your best bet is to go with a tour group, most cheaply booked on arrival in Arequipa, and you’ll be given two options: to travel around the top of the canyon by bus, or to spend two days or more hiking to the very bottom. Choose the latter. After an early start you’ll get striking close-range views of the area’s famous Andean condors from above at Cruz del Condor, before beginning your descent on foot. Altitude sickness may become a problem so take precautions beforehand, but up to 120, 000 visitors arrive every year (not that you’d notice at the bottom) and most feel very few of its effects. Not that you’ll have your breath anyway, as from the first steps of the walk it will have been stolen by the panoramic views across the valley’s mountains and farming terraces, where pre-Inca cultures still maintain many of their traditions.

A view over the Colca River Valley.

Enjoy the first day’s descent and subsequent flat trek along the valley’s course while you can, as the second isn’t quite so relaxing. You do, however, at least get a break in between at your night’s accommodation – a collection of huts complete with pool, next to a picturesque waterfall. What the next morning holds in store doesn’t at first sound daunting, with just three hours of walking before breakfast and then you’re done for the day. Unfortunately, it is. Those three hours happen to be directly upwards at what feels like a ninety degree angle to the ground. And the top just never looks closer. For the less inclined to exert themselves in the pitch black before they’ve even eaten, mules are available. Your reward is a chair, food, and eventually a replenishing dip in a thermal pool.

You may then choose to return to Arequipa for your onward travel, but buses also run straight from the local town Chivay to Puno, the next stop on your trail. Whilst not itself the most inspiring of places, what this port city offers is a gateway to Lake Titicaca: the world’s highest navigable lake. At 22, 400 sq mi its size isn’t to be sniffed at – its opposite banks aren’t even visible from the city – and the best way to explore this astonishing area is via an overnight boat tour. These have proven controversial in recent years due to exploiting local families, so make sure to book with a reputable company (such as AllWays) who allow you to pay your host directly. Then you’re all set, jetting off on your boat to your first stop, the fascinating floating Uros Islands: artificial landmasses first woven from reeds to escape the Incas hundreds of years ago. Nowadays you’ll first be excited by their delightful springiness, but do beware that you ought to bring some cash: it’s quite hard to stop yourself buying once the seller has shown you their home and children…

The colours of the floating Uros Islands.

After that it’s off to your overnight stop on Amantani, where an afternoon trek to watch the sunset from the island’s highest point will certainly remind you of your current altitude. It’s worth the puff up there though for the views over to Bolivia, and to circle the ancient monument three times for good luck! This is also where you will meet your host family, sharing lunch and dinner and getting to know each other – they’re friendly enough that even a lack of knowledge of Spanish or Aymara won’t get in the way! Evening entertainment consists of a quite awkward ‘traditional’ celebration for their guests, which is at least optional, before collapsing into bed before tomorrow’s early start. Don’t expect showers or running water, so you’ll be ready quicker than ever for your boat ride over to Taquile. Here there is more free time to struggle up to the town’s centre and explore the market, definitely worth a look for your souvenirs as it is possibly one of the most relaxed and least pushy market places on the continent. Then it’s lunch and homeward bound, taking in the sunshine on the deck as you zoom over the seemingly endless waters.

After a night spent in Puno, your next day will be spent almost in its entirety travelling north to Cuzco. Your two options here are a train or a bus, with both taking similar amounts of time and the former costing extortionately more. Apparently it’s worth it for the panoramas. On the bus you’ll get a number of stops at interesting churches along the way and a buffet lunch, but you’ll still be glad to get off at the other end. However, what you may want to do is not hang around for too long and head out of Cuzco the very next day to its star outside attraction: the Sacred Valley. This area really cannot be done justice in fewer than two days, and a guided tour may be easier if you don’t speak Spanish or aren’t yet confident with Peru’s rather haphazard public transport system. Either way, there are some places that you just cannot afford to miss.

Looking down on Ollantaytambo from Pinkuylluna.

The nearest village is Pisac, famed for its market which has now become so flooded with tourists that it spills out of the central square nearly every day of the week. However, what’s really special about this place is its towering Inca farming terraces and ruins which offer stunning views of the surrounding valley. For a truly special experience, take a taxi up but walk back down: nothing can beat discovering a whole series of other archaeological sites as you adventure away from the hordes to see things for yourself. Your next stop would then have to be Ollantaytambo, convenient for an overnight stay due to its impressive range of restaurants for such a small town. The dominating Inca fortress is impressive, but also be sure to get up early so as not to miss a solo climb to its sister site, Pinkuylluna. Then finally head over to Moray and Maras, both stunning feats of engineering ability. The former are circular Inca terraces, believed by some to have been developed to acclimatise different species of potato to growth in different climates. The latter is a salt mine, still in use today, where you can gaze down at the mesmerizingly white tiers of evaporating water.

It is now time to finally return to the city of Cuzco, the doorway to the Inca trail and eventually Machu Picchu. However, part three won’t only take us to the trip’s end, as we also look as what Peru might offer you away from this well-beaten track.