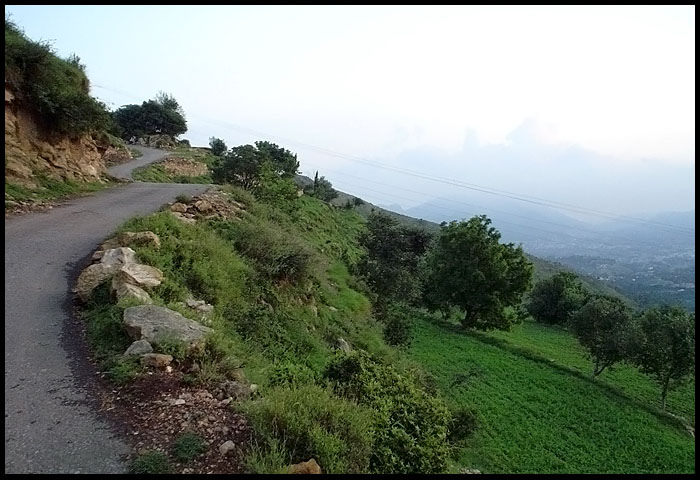 On the road outside Abbottabad, Pakistan.

After a fantastic set of entries to our new students’ travel writing competition, we were finally forced to select the winners last weekend. With stories that spanned the globe in their efforts to make us laugh, cry, and share in their frustration, we eventually decided that the standout effort was made by Philip Myers with his tale of a nail-biting adventure in Pakistan. Congratulations Philip, and we hope you enjoy your meal at Claypath Deli!

Second and third place proved even more difficult to judge, but these accolades were at last awarded to Jonathan Theuring and Lisa Font for fantastic portrayals of mishaps in Thailand and Slovenia respectively. We would like to thank all of our entrants for making the decision process so very difficult, and hope to be reading more of your articles very soon! In the meantime, read on below to enjoy the wise words of Philip, Jonathan, and Lisa…

“After Osama Bin Laden was killed, the city of Srinagar, less than a hundred miles from Abbottabad, went through a paroxysm of mourning. The streets were clogged with marches and spontaneous protests, often hastily dispersed by police armed with water cannons and skin-staining purple paint. I began to feel that my presence would give someone the excuse he needed to give me a good mugging, and decided to leave the next morning.

My bus, well hidden among a wild abundance of inexplicable machinery, left early, in the dark. The journey was long and eventless, and, as always, roadside restaurants offered only rice, dal, and salty tea. The cumulative effect of such a diet, together with a worn-out bus and mountain roads, may be familiar to some readers, who will understand the state I was in when I woke up that night in total darkness with a stranger asleep on my arm. Those few hours remain among the worst of my life.

I arrived in Reckong Peo the next morning, the town rising vertiginously around the curved mountain slope on which it sprawls. I spilled from the bus and tramped up the steep slope to the town proper. Every building was shut up tight, doors bolted, blinds down, and children skulked about with small dogs on leads, smiling at me as I passed.

By this point, temple veins tumescent and jaw clenched, I was truly desperate. I stood sheepishly by a half-built hotel, its concrete skeleton bare and brittle. Apparently unwatched, I climbed across a low wall and down into what would should have been the basement, and hid behind the uncovered staircase. I took down my trousers and squatted, staring out in baffled silence at an unblocked view of the mountains as the sun spilled over the ridgeline and lay down highways of light across the forested slopes, hazy behind a diaphanous film of cloud.

I climbed back up to the road and looked for a hostel, my whole being strangely suffused with calm, and hoped that whoever found what I had left would think a dog was responsible.” 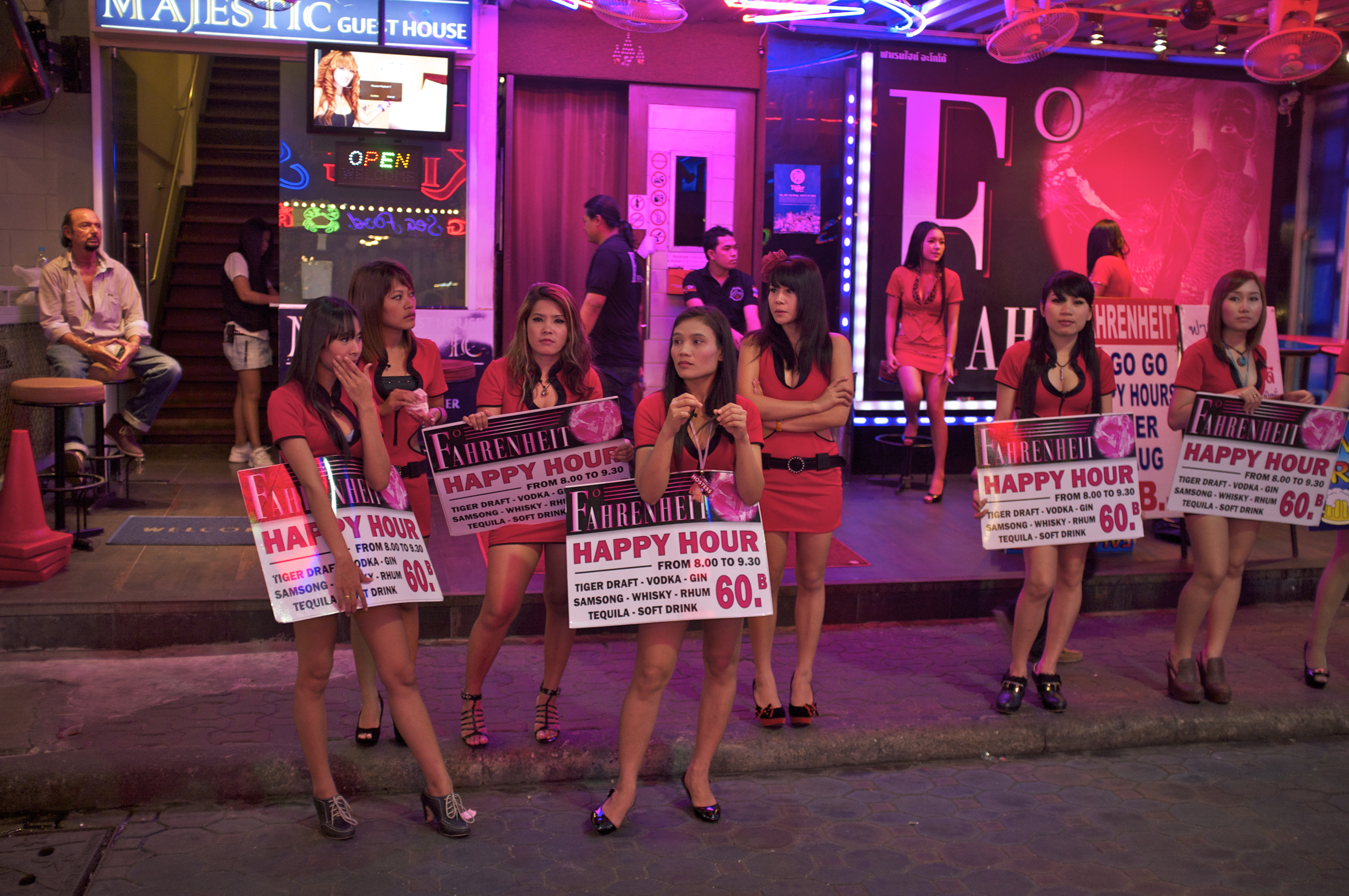 “Hurtling down the Thai east coast motorway in a clapped-out old taxi cab, we both felt as though we had left the comfort and familiarity of the Hotel De Bangkok a little too soon. Our next destination was Pattaya, two hour’s drive from Bangkok.

Of the locals we had already met, many had scoffed at our travelling plans: Pattaya has a well-established reputation as a hub of all-night partying, prostitution, and lairy drunken sex tourists.

A few kilometres from Pattaya at about 5pm we reached a traffic jam that stretched for hundreds of cars along the road into the city.

‘No way round,’ our taxi driver informed us, ‘you’ll have to get out and walk the rest’.

Now both wishing we had packed fewer t-shirts in our heavily laden 20kg backpacks, we continued towards Walking Street – the main tourist district of Pattaya – on foot under the 36-degree heat of the sun.

As it got dark we arrived at our hostel to be greeted by a very burly, very friendly German manager named Stefan. His first words to us I will never forget: ‘Two boys… one room?’ he asked with a wry smile (rhetorically, I hoped at the time).

Having reassured Stefan that we were happy with current sleeping arrangements, and that he would not catch us with any illicit third roommates during our stay, we headed up to our room and got ready to go out.

Pattaya’s nightlife was, without a shadow of a doubt, the most raucous I have ever experienced. From the excessively flirtatious (and downright sexually aggressive) ladyboys, to the forthright purveyors of special ‘ping pong shows’ and other tourist traps – we took it all with a pinch of salt. You leave Pattaya hardened to a lot of things.

For us, the real highlights of Pattaya were jet skiing across the bay; our boat trip to a nearby island, and, of course, the time we were invited to take to the stage of a gay gogo bar near Walking Street, putting the professional strippers to shame with our twerking skills (we did remain fully clothed though, honest!).” 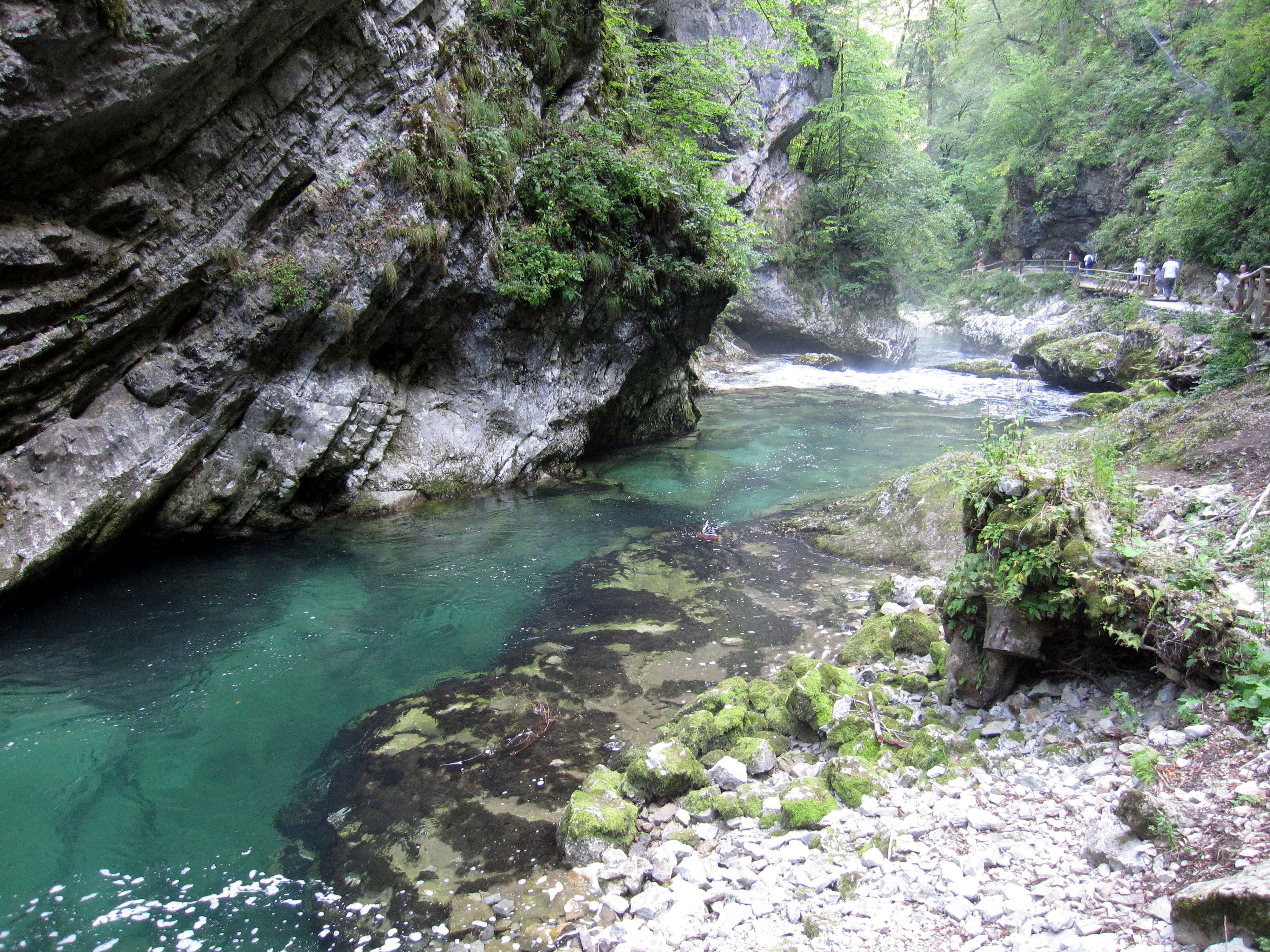 Slovenia: Quite different from Exeter.

Third Prize: Up Sh*t Creek Without a Paddle, by Lisa Font

“If anyone ever tells you that they were in the Exeter Canoe Club do not, ever, trust them in a canoe. It would be like letting someone who had read a book on driving actually drive you around in a car. Despite there being a river in Exeter these hardened canoeists choose instead to practise on a canal, which, as most people know, is very different from white water rapids in Slovenia. For years my Mum had boasted about being in the Exeter Canoe Club and any attempt at advice was quickly rebuffed with “Don’t tell me anything about canoeing – I was in the Exeter Canoe Club”. Now the only thing worse than being stuck in a canoe in white water with an Exeter canoeist, is being stuck with an Exeter canoeist who isn’t wearing their glasses. So there we were, paddling down a beautiful river in Slovenia when I (being the only one who can see properly) shouted “Watch out for that massive rock!”. Now my Mum, who was supposed to be steering (steering seems to have been left out of her Exeter canoe club training), couldn’t see this rock or in fact quite lot of things. As a result my Mum steered us in the wrong direction, so the next thing I had to shout was “Watch out for the bank!”. Too late, we shot up the steep bank and ended up perched precariously on a rock halfway up the slope. Now this rock was having none of it and proceeded to collapse, tipping the canoe upside down into the water. To make matters worse my Dad and brother, having just hit the white water, were coming speeding towards us and our capsized canoe. I emerged drowned rat style from the water only to be hit from behind by their canoe and fall face first into the water (again). I’m afraid to say that since that canoeing incident I have refused to canoe with my Mum, it’s only safe.”