Braving the Baltics (Part One): Riga and Tallinn 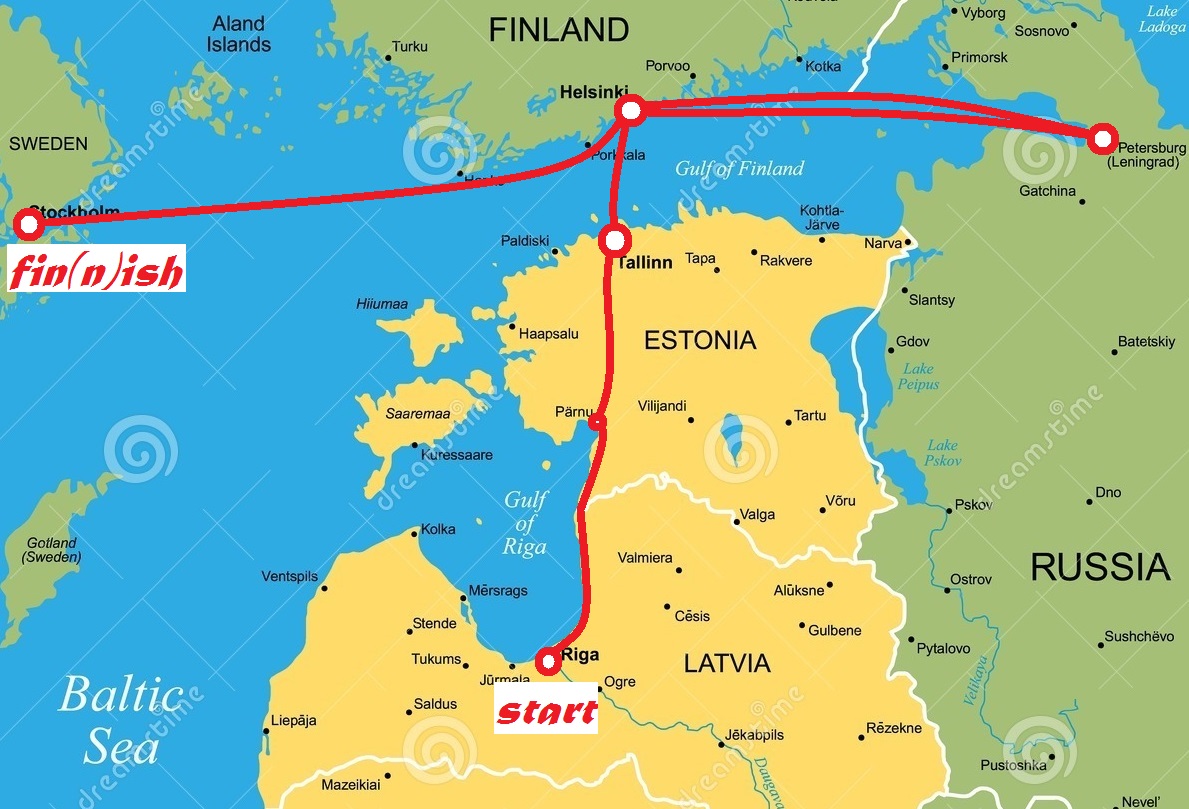 Never in a million years would I let this chance pass me by. Student tour operator, Scanbalt Experience, were offering me a place on their 10-day Easter Bunny Tour in exchange for a write-up. What? So I would get to explore five cities on the Baltic coast—Riga, Tallinn, St. Petersburg, Helsinki, and Stockholm—for the first time in my life? OK, I think I can pencil you in, I replied, itching to get going from that moment on.

My adventure began in the Latvian capital, one bitingly cold night. Deserted by my taxi in St. Peter’s Square, it was coming up to 12 and I was late. The plan was to meet someone in a nearby bar who would take me to my hostel, then for complimentary drinks. Admittedly, I was apprehensive about the entire situation, especially as I’d read somewhere that part of the Old Town is owned by the Russian Mafia…

I eventually tracked down the bar, located off the side of another bar which I had walked past at least twice. Upon entry, I was enthusiastically welcomed by a young waitress who spoke perfect English. My worry melted away as I took off my winter coat and joined her at a table. After some chatter it became apparent that the purpose of this reception was to brief me on safety. My hostess explained that Riga is notorious for scams involving attractive women as bait, so as a female I wasn’t a prime target for these. However she did warn me to keep an eye on my drinks at all times. I grasped my pint of Lucky Dog tightly, as if that would help.

Now, as my tour with Scanbalt Experience would not officially begin until the following afternoon, I had the morning in Riga to myself. First on my agenda was climbing the steeple of St. Peter’s Cathedral. Despite the biting wind I stayed up there long enough to get my bearings and appreciate the jigsaw of terracotta roofs, old churches, and the snaking ‘River of Destiny’, as it is known, at my feet. 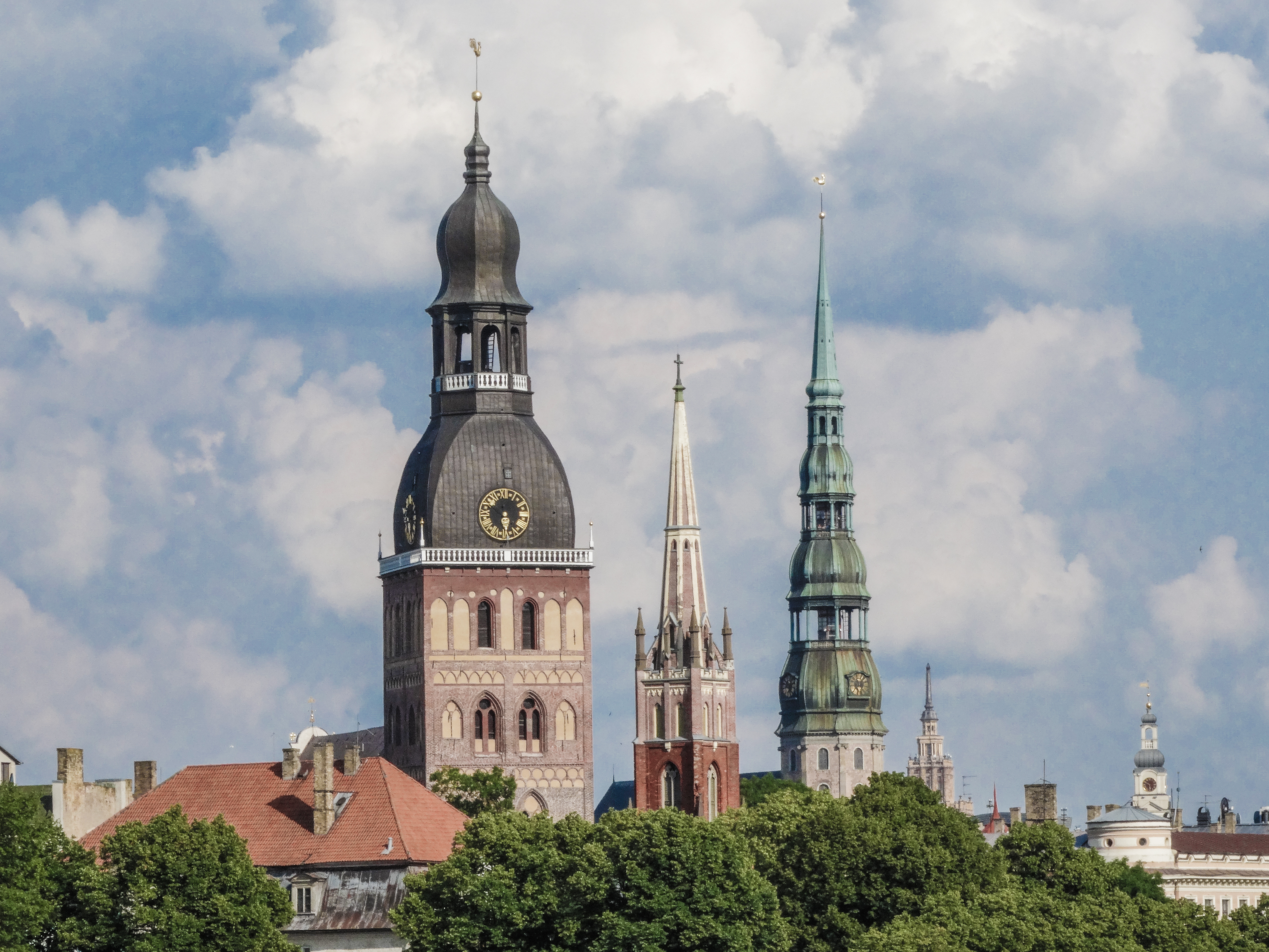 Belfries in the Old Town.

A permanent exhibition in the Cathedral shows how the steeple was reconstructed following Soviet times. Traces of the Soviet era are ubiquitous in Riga, as Latvia only gained independence in 1991. My next stop, then, was the Occupation Museum. It wasn’t a jar of sunshine, with hard-hitting video interviews with survivors, but I left feeling cured of my ignorance.

Back at the hostel, I joined my tour group – an assemblage of 20 students and young professionals. We were a mixed bunch in terms of nationality, but the curiosity and open-mindedness we shared was self-evident. We bonded over our first meal together—a Latvian buffet at the Lido Atputas Centrs. The complex was packed full of locals helping themselves to vats of sweet-smelling sauerkraut, steaming soup, and sausages galore. We ate ridiculously well for five euros a head.

That night I asked our guide Zane (pronounced “Zana”) if she could show me her favourite hang-out in Riga. As only four of us had mustered the energy to go out, she obligingly took us to a cavernous, subterranean bar, unbeknownst to tourists. There we sipped beers brewed from real cranberries, a Latvian speciality, and tapped our feet in time to the live band. 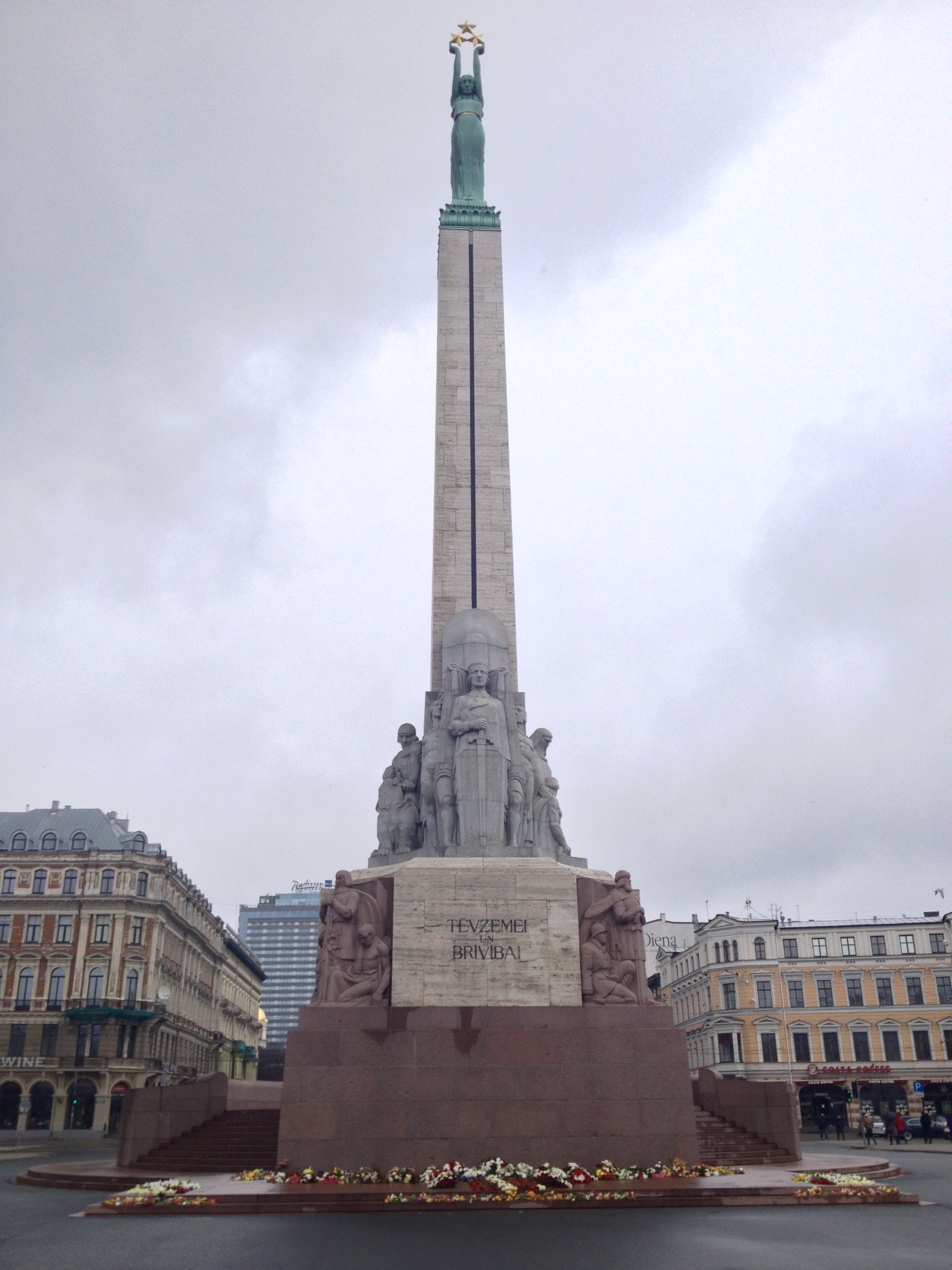 On our tour of the city the following day, Zana led us to the main points of historical interest. We saw “Corner House”, the former KGB headquarters, and the aptly-named “Freedom Street”, formerly known as “Lenin Street” then “Hitler Street”. She taught us how to recognise Soviet housing, we admired examples of Art Nouveau architecture, and traced bullet holes in the walls along the way. Towards the end of the tour my curiosity had waned somewhat, negatively correlating with the growing numbness in my toes. But it’s safe to say that Riga has a lot to offer, besides dirt-cheap alcohol people.

During the bus ride to Tallinn, I caught glimpses of the countryside through the bleary rain: one watercolour background of sludgy colours with spindly birch trees in the foreground like the teeth of a comb, crusted lychen splattered on their trunks like faded blood stains.

At the service station where I first set foot on Estonian land, they served homemade Seljanka soup with dark, dark rye bread and sardines on toast, all for one euro. 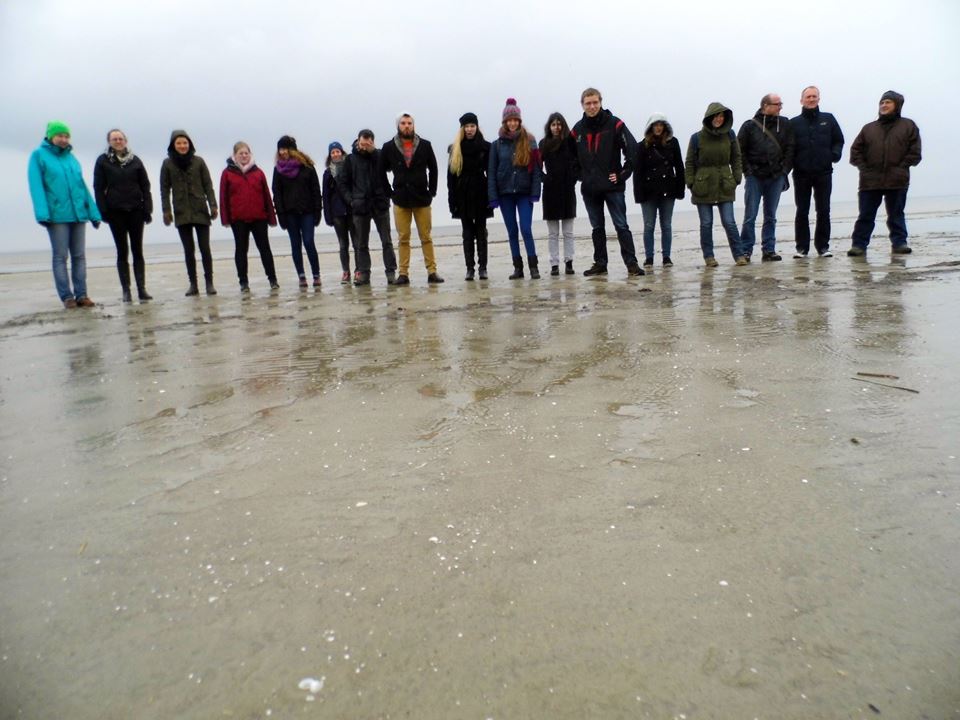 The family holiday in sunny Parnu.

We continued along the coastline, leaving behind the Bay of Riga, which is shaped like a horse’s head. Made a stopover at the seaside town of Parnu. It was quite exhilarating to look out across the Baltic sea (or East or West Sea, depending on where you’re from), whose brackish waters were frozen over just one month ago. The dramatic, sweeping grey horizon reminded me of a charcoal drawing.

Millions of years ago, the Baltic Sea was a pine tree forest. Nowadays, amber can be found washed up on its shores. It has become a popular souvenir amongst tourists with ‘amber’ street vendors on every corner. It’s amazing really how they manage to source so many pieces of fossilised tree resin with mosquitoes trapped inside; I mean what are the chances? Quite slim it turns out. If you want the genuine product, it’s best to pay that bit extra in a reputable store. Milky-white amber is the most expensive variety whereas cognac amber is heavier. 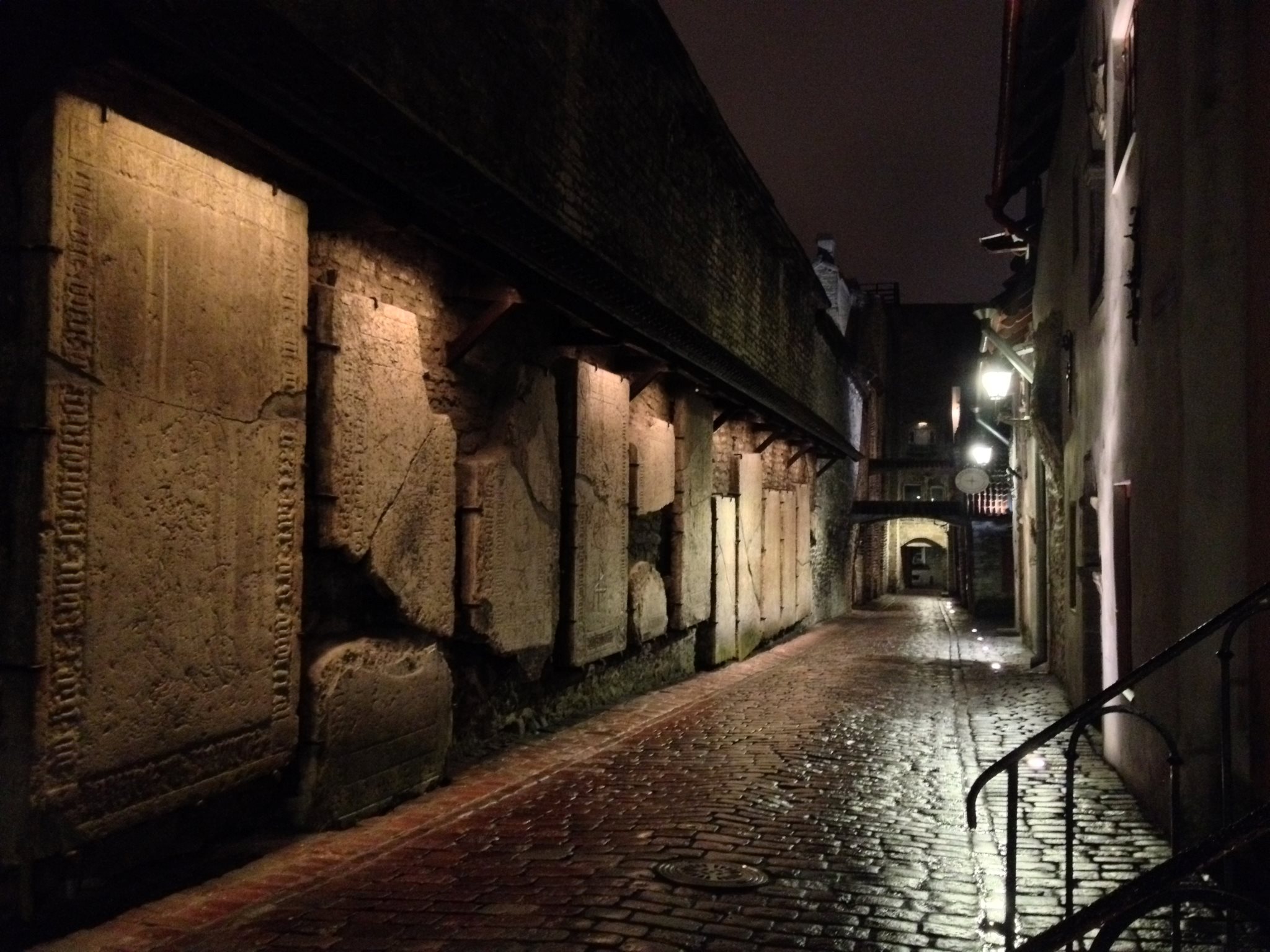 We may have been lulled into false tiredness by the comforting rocking motion of the bus, but the brisk tour around Tallinn in the even brisker cold soon perked us up. Half of the Estonian population reside in this city (only 1.3 million people, don’t get too excited). The town-planning was originally based on strict hierarchies of medieval times, with the aristocrats traditionally inhabiting the uppermost part. Order was maintained by way of Medieval Fortress walls, which are still standing today. Our local guide explained that Tallinn has always been too poor to remodel its architecture to conform to more fashionable styles, so it has maintained a gothic aesthetic. And thank goodness it has, because this has become Tallinn’s unique selling point.

That night we supped on moose soup and sampled Vana Tallinn, a strong liqueur with Christmassy spices, Estonia’s national drink.

Horrendously early the following morning we trudged the 500 m from our hostel to the ferry port. We were bound for St. Petersburg, via Helsinki.

There is actually a precise reason why we were to enter Russia in this way. St. Peter’s Line ferries have an exclusive agreement with the Russian government in that all passengers they bring to the country are entitled to a 72-hour visit visa-free. What’s more, on April 1st this year, customs did away with the old, off-putting paperwork. So the passage was easy as pie, well almost.

Read more beguiling tales from the East in the upcoming article, Braving the Baltics: St. Petersburg, Helsinki, and Stockholm!