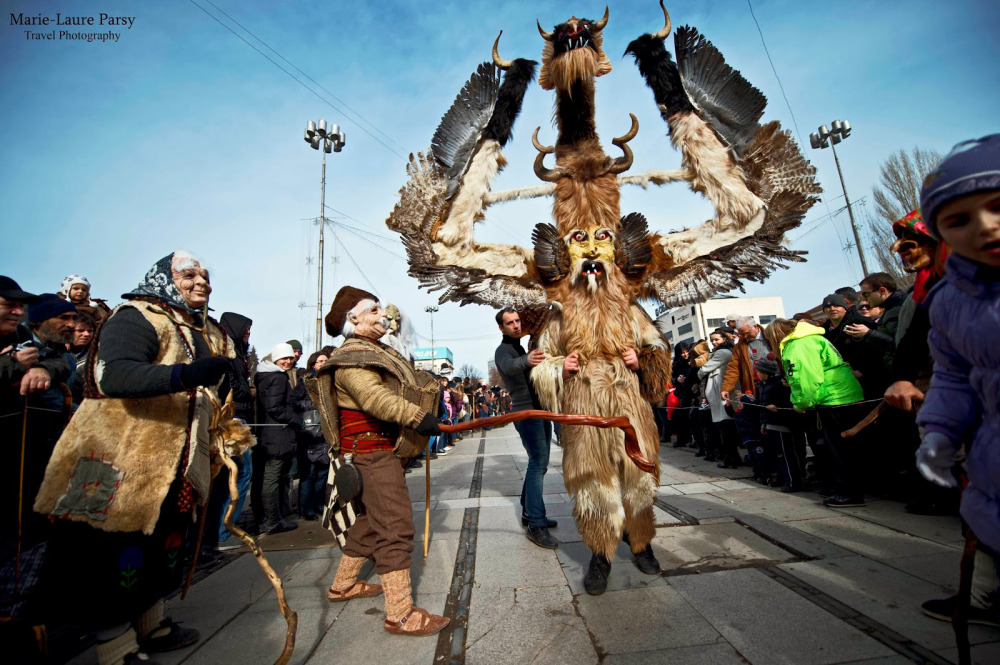 “The Kukeri have walked and danced across villages for centuries.”

It’s 02.55am on a grim winter night when my flight touches down at the Sofia-Vrazhdebna Airport, the main international hub of Bulgaria. I had hoped for a refreshing clear sky but the damp tarmac and an oppressing nip hint at a thick layer of sludgy clouds above my head. I feel compressed by the darkness and the cold, the resonating voice of my Bulgarian contact harshly bargaining our taxi ride to the one of the city residential districts of cemented honeycombs. At first glimpse, I choke at the sterility of colours, failing to thread the aim of this visit back into reality. We are on our way to the “Surva” festival, and my naïve fantasy of discovering an exuberant enclave of occult folklore faces immediate obliteration. A metallic curtain of sleet has drained the world ashen.

Only a short ride separates Sofia from the industrial town of Pernik located 40 km to the South-West of the Bulgarian capital. A short ride among forests of decaying grey cubicles thinly sheltering lives from the outside frost where snow mingles with iron.

“Welcome to downtown Bulgarian Texas!” mocks our driver, sniffing at the grotesque figure of the decrepit bastion of heavy industry. He briskly points at a lonely road sign that navigates newcomers to the apparent unmissable sightseeing sites of the place… “Пивоварна тази посока”…. „Brewery This Way”. A welcoming committee of shattered cement and fractured steel lies ahead beneath shallow hills of dusty rubble: The air smells of rusty slush, melting in cold musky sweat and an impending storm looms over.

Astonishment comes as a biff as the festivities ignite. Despite the ghoulish stigmata left by the exploitation of rich coal-beds, Pernik becomes, for three days a year, the stage of the International Festival of Masquerade Games, a tsunami of vivid colours portraying carnival traditions around the world. Among seething crowds and bouncing troupes, the Bulgarian ritual of Kukeri is head of ceremony. Fearsome preachers, staged exorcists, the Kukeri have walked and danced across villages for centuries, scaring evil spirits and December’s malevolence away to bring good harvest, health and happiness for the year to come. In the Balkans, in the feisty ravening cold, Winter drains its own veins until the sky itself looks raddled and ragged. But each year, at the end of January, in what is now a paved arena plagued by the whirr of cars and the acrid smell of stale smoke, a delicate spark sets ablaze legions of sulphurous souls, bastard creatures of men and beasts, hunting bare-fang and frosted-hooved the famished winter days. 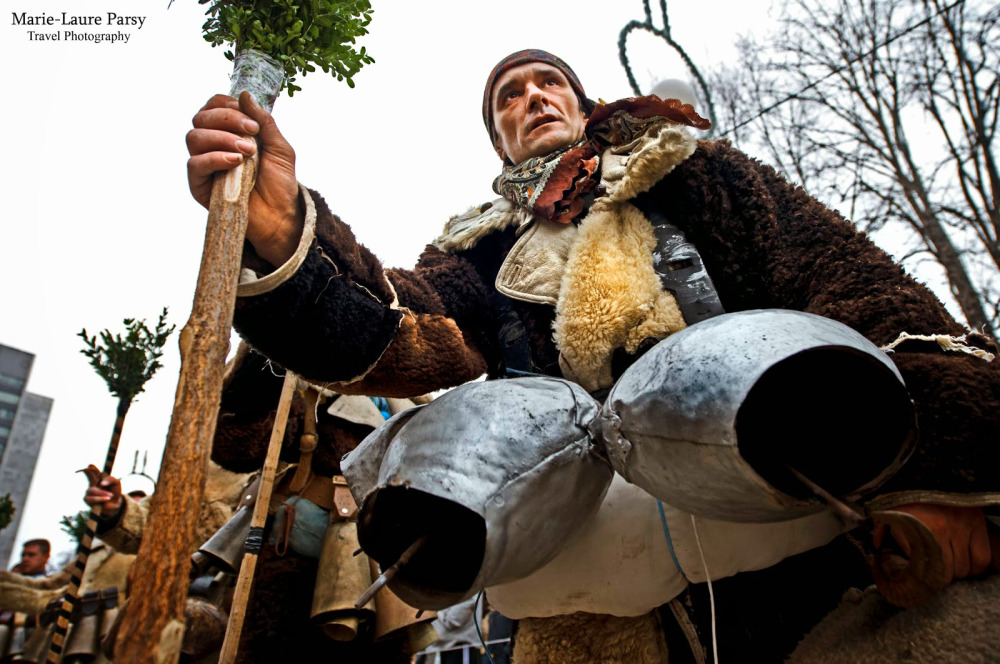 “The clangour of cow bells enthrals”

Dozens of groups and hundreds of souls in disguise sprawl along the central artery of Pernik to flow in roar in front of the judges’ stance. The air is charged with electric bliss, flags of Italy, Indonesia, Polynesia, Serbia, Montenegro float alongside the Bulgarian Tricolour, and the clangour of cow bells enthrals to trance, captivating the crowds packed tight with unswerving constancy.

I dive into the pack. Two treacly paws covered with dirty grease quickly grab my face and smear my cheeks with dark sludge. All that echoes is a boisterous laugh, enveloping my senses and tossing me into a world of complete duality: Masks made of sheep skin frame demonic faces, gigantic visages of feather and wood are carried forward by frail boys, men and women alike cross-dress in transvestites, turning the world upside down in a thunderous tumult. I escape and dive again, drunk in euphoria, submerged by their contagious glee, forgetting how frostbite eats my hands.

I get trapped again. They throw me onto a manky dental chair, a moth-eaten display of surgical green leather, toppling me under three infernal butchers in blood-battered lab coats. A syringe pierces my lips, another one breaches my belt, and a cold liquid invades my tongue and drenches my legs. Hard anaesthetic…?… Maybe mind-fogging chloroform?.. Somehow I remain conscious and a well-known sweetness starts tickling my taste buds: Home-made rakia, left to chill in the snow, exquisite. I get up and waltz again and again… A motorised barrow named “Spartacus” weaves its way through gangs of lunatics, hopping, possessed, sounding cattle bells. Driving grill, barbecue on wheels, its truck fumes with burning coals. Sizzling onions, sausages and skewers glaze with a smoky crust. The drivers take pity of my dirty face and frozen hands: a toasted slice of bread lands in my hand, a spicy steak finds its way to my mouth and gets forced-fed down my throat in gluttonous gulps of plonk. 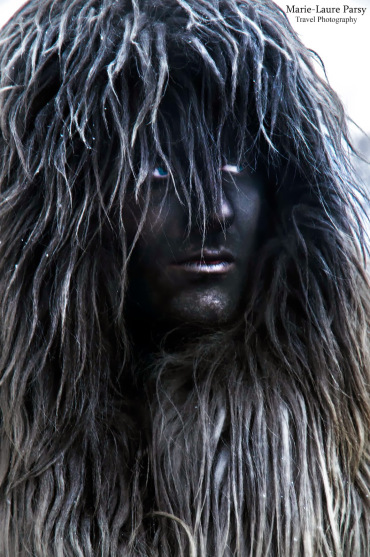 And there I was. With frostbitten hands and tannin-tainted lips. My pants wet with rakia, my cheeks smeared with dark coal, a chicken skewer in hands, running alongside a drivable toaster among legions of beasts wearing masks, feathers, and bells. Please, one more time!

When to go: The “Surva” International Festival of the Masquerade Games takes place on the last week-end of January.

Where to stay: Hotels get pretty expensive in Pernik during festival time, and are not worth spending your money on. Stay in Sofia at one of two hostels below: Both are cheap, comfortable, with a very friendly staff. I have used the Canape Connection airport pick-up/drop-off service (available for a small fee) during my last visit: They were very reliable: my flight landed ahead of time by 30 minutes in the middle of the night: Miroslav, who was responsible for picking us up, had checked the international arrivals online and arrived accordingly to the airport.

How to get there: To go to Pernik, take a 20 minute walk to Gare Centrale and hop onto one of the hourly trains. Expect an average journey between 45 min and 1 hour. I would not recommend walking back to your hostel at night: Take the underground right outside of the station back to the city centre.

Organise yourself: I would recommend getting to Pernik for 10am except of the first day of festival. The opening ceremony happens after sunset with a beautiful pyrotechnic show. The rest of the day is rather slow but allows you time to explore the surroundings, exhibitions, get your press access card if needed. On the first day, arrive around 3pm/4pm and go directly to the Cultural bureau:

Get plenty of memory cards, batteries, warm waterproof clothes and a sound recording device. Pictures only are insufficient to capture the whole essence of this event: record the clangour of bells, take videos of of the spectacular dances from the Balkans. Get back to the train station around 21h30 to catch the last train back to Sofia.

This article was originally published on Marie-Laure’s blog. It is reproduced here with her kind permission.