A Message in a Bottle

From first travelling to the Isles of Scilly aged two and returning every summer since for the past eighteen years, I have spent a total of eleven months of my life in a tent on Bryher, the smallest of the inhabited islands. It is, undoubtedly, my favourite place in the world. When I think of my childhood and my upbringing, I think of the Scillies.

Life on the islands derives from an authentic seafaring history that, together with many other characteristics, provides Scilly with its distinctive individuality. Ask anyone who has been – these islands are the UK’s hidden paradise. Tucked away off the coast of Cornwall, the islands are characterised by their white sandy beaches, crystal clear waters, and a unique array of flora and fauna – most infamously the Scilly seals. An undoubtedly magical element of the Scillies is that despite the thousands that flock to the islands throughout the summer, the beaches remain virtually empty –  the long stretches of soft sand decorated only with footprints and seashells. 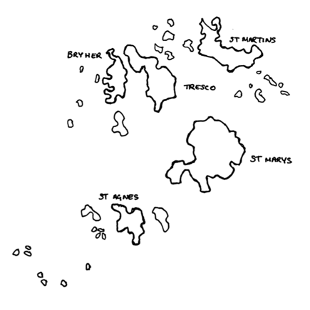 Along the tidelines, however, you can find something that connects the Scillies to the rest of the world: plastic. As part of a geographical research project that I conducted in the Scillies, I collected and analysed over two hundred items of ocean plastic. One day, whilst I was scanning Great Porth beach on Bryher, I came across what turned out to be my most interesting and important piece of plastic. Sitting at the top of the shore was a clear plastic bottle containing a rolled up piece of paper with sellotape wrapped intensely around the screw-top. I had just found a message in a bottle.

Tearing off the tape, I unrolled the paper to reveal a message beautifully and delicately hand-written in Chinese on one side and a poem written in English on the other. Beneath the poem the sender had written an email and what seemed to be a phone number. Holding the paper in my hand, I couldn’t quite believe it. A message in a bottle seemed to be such a fairytale fantasy, yet here I was holding one. There was only one hurdle in my way: my inability to read or write Chinese. 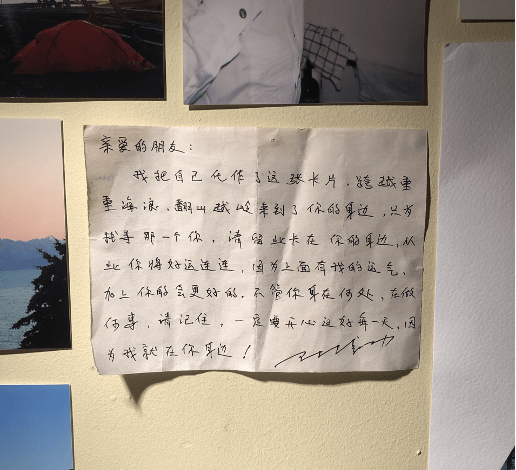 Immediately, I crafted my reply and got in contact with a friend of mine who was able to translate my message in return:

I have found your message in a bottle, washed up on the shore of Bryher, The Isles of Scilly, England. Thank you for such a lovely message! I am keen to know where from and when exactly you sent this message as I am currently undergoing a project analysing where different items of plastic, that I have found on the beach, have travelled from and I would love to know the origin of your message in a bottle as it appears to have come a very long way!

I hope this email reaches you.

Sat in a geography lesson at college at the start of term, I was showing my friend the message when I suddenly realised. What I had thought was a phone number was in fact a second email address for an email server that I didn’t recognise. All that I could make out from it was a double letter, either a “gg” or a “pp” or a “qq” and sure enough, after some googling, I discovered that @qq.com was a Chinese communication software. With my hopes rocketing once again, I resent my email. This time, he replied:

Please allow me to email you in Chinese as I can express myself more clearly. I am very happy to receive your mail, you picked up my message in the bottle and then I received your email. I think this whole thing is very magical.

First of all, I would like to say that my intention was not to produce rubbish in the sea, but to convey a message. About where this bottle was thrown? It is a very long story! A few years ago, I was a seaman and I travelled to a different part of the world. I have now gone back to China and work in finance. I think the bottle was probably thrown in the first half of 2015 and I was in the South Atlantic near the Brazil coast at that time. It was a long time ago so my memories are a bit blurry.

It is kind of fate that I meet you and now I have a new friend. If you have the opportunity, you are very welcome to come to China!

It was almost too good to be true. In fact, I would agree with Chen Bo Shaui, it was indeed magical. His message in a bottle had travelled 15,000km over 3-4 years through ocean currents and gyres. From being dropped off of the East coast of Brazil, the bottle had been carried in the Gulf Stream North into the Gulf of Mexico and the East across the North Atlantic Ocean to reach the Isles of Scilly. With my gap year coming up the following year, I was convinced to see how far I could take this story and I started a plan to take up Chen Bo Shuai on his offer for me to visit China. As you might imagine, this idea could not have been shut down faster by my parents. But still, I had made a pen pal. And although we live worlds apart, the divine intervention of mother nature connected us together – what a special world we live in.

I would like to finish by reflecting on the reality of this story. Plastic in the ocean (as I’m sure you will have seen in the news) is a serious global problem. Marine wildlife can greatly suffer from ocean plastic, either from ingesting plastic coated in toxins or from becoming entangled in the plastic itself. The message in a bottle demonstrates that plastic produced in countries around the world can enter our oceans and travel internationally to countries in other continents. So, whilst some plastic debris is discarded off a nearby vessel and only floats a few hundred kilometres to the nearest land, some plastic remains in the sea for years and can travel thousands of kilometres around the world. Principally, the longer plastic remains in the sea the more toxic it becomes, the more extensive the exposure to wildlife, and therefore the greater damage it can do.

I sometimes picture Chen Bo Shaui off the East Coast of Brazil working on his container ship, sitting down and writing his message before placing it in his empty, recently finished water bottle and then lobbing it overboard. I wonder if he ever thought about where his message in a bottle might end up, maybe further up the coast of Brazil or the Carribean at a push. All I know is that I bet he never thought his little bottle would make a trans-Atlantic crossing and land on a tiny island on a beach no wider than 300m to be found and picked up by a young English girl.

What a journey that bottle must have had.