It’s summative season in Durham. Everyone looks dazed, somehow; people from English and Engineering alike clutch their coffees as they fast-walk to the Billy B, hoping to get at least 100 words in before they pick up their phones and aimlessly scroll through Durfess. Amidst all of the panicked writing and subsequent lack of sleep, it is really easy to feel lost in this long, snowy (or should I say icy) term. In order to allay my own feelings of rising doom at the prospect of writing my Theory of Criticism essay, I thought I would reflect on a brighter time: Summer 2018, in which I visited the city of Barcelona. Enjoy the product of my procrastination, and let me take you away from nightmares of failed modules and into the dream that was my visit to Catalonia.

After a difficult first year at Durham, I had to get away. My lovely boyfriend and I packed a single suitcase (I had to fight for every dress and pair of shoes), and we left the North behind. We arrived, dazed, in the Gothic Quarter, amidst a chaos 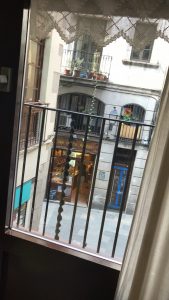 of luggage-finding, taxi-riding and language barriers, and we ascended the steep flight of stairs towards our tiny apartment with some trepidation. Everything felt so compressed, the buildings were narrow, tightly-packed, and so seemingly tall that you felt a sense of claustrophobia when looking skywards. Ours was no exception. We were, however, pleasantly surprised. We had a tiny little balcony – there was barely room for one – on which we could see (and smell) the tantalising bakery opposite. It attracted all manner of people: local residents, police officers, not to mention us. Somewhere above, a television was blaring, down below dogs were howling, and the people were too – with laughter. We found ourselves in the centre of everything.

After applying copious layers of sun cream and obsessively poring over Apple Maps, we finally made it out into the streets. We moved as a child might, with caution, looking for some sort of guidance from an authority that we could only find in the Tourist Information Office. After acquiring yet more maps, we slowly started to lift our heads. Everything was happening around us: people were bustling here and there, walking into the tiniest, doll-like shops, containing everything from floral, ankle-length sun-dresses to exquisitely carved wooden pipes (and the illicit substance that sometimes goes into them, I might add). Bikes, along with the laughter of the people on them, blurred past us, as well as scarier cars, reminiscent of 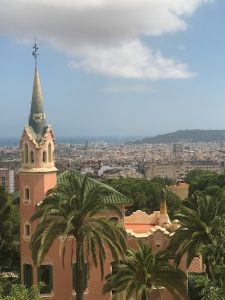 those that tend to beep their way down Market Street in our very own Northern home. The smell of fresh bread permeated the air every so often; we were tempted into many cafés. My personal favourite served freshly-squeezed orange juice. I remember being so inexplicably excited by that; it might have been the fact that you could literally watch the locally produced, fat oranges being squeezed right into your glass. Everything was so fresh – it was the recalibration that I needed.

We piled onto the Bus Turístic like the unashamed tourists that we were, secured valuable seats on the windy top deck and let 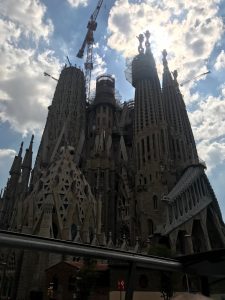 Barcelona shoot past us. From Gaudí’s Casa Batlló to the Magic Fountains of Montjuïc, we saw everything – we leapt off when we saw something cool, and trudged back on when we were exhausted, hot, and in need of a sit down. The freedom was immense, there was no concrete plan to follow, no set menu of what we had to do and when. We turned a corner and were confronted with the Sagrada Família, arguably Gaudí’s most famous construction. From afar, it was impossible to discern exactly what the structure was made out of. It almost resembled a termite mound, built in a feat that defies gravity. The concept here was the same: I wondered how humanity was capable of building something so monumental. We got off the bus, our heads still craning upwards. Approaching the building, still somewhat stupefied by its sheer scale, we started to focus on the walls: every indistinguishable contour transformed into images, carved expertly into the side of the building. Everywhere I looked, there was something new to understand, something new to be questioned. This reflection gives me motivation to finish this long term: humans are capable of great things when they apply themselves. So, go to the library, but don’t stress too much. The days are lengthening, the sun is peaking through that little bit more, and the bitter cold is becoming increasingly tame. Summer is getting closer, and Summative season will soon be over: soon, these reflections won’t be necessary.