Rise of the Drag Queen

In recent years drag queens have becoming a huge part of pop culture, emerging from their niche audiences to perform and slay in mainstream media. Looking back at the history of drag, however, proves that drag queens have trekked a long way – in 6-inch heels, no less – since their origins.

Drag has always been part of culture and the arts since its beginnings in early theatre, where cross-dressing males was a standard. Women were forbidden from acting in many cultures, such as in Shakespeare’s plays where the female parts were played by young boys. Likewise, Kabuki theatre emerged as an all-male style of theatre in Japan, after the shogunate banned female performers in 1629. When female actors became socially acceptable, drag was largely then used for comedic effect: this was when the pantomime dame figure emerged, revealing a drag performance much closer to the drag queens we know of today.

In the 1920s and 30s, the emergence of underground gay bars brought with them the birth of the true drag queen performance, carving out a niche but enthusiastic audience among the LGBTQ+ community. This is where drag remained for many years, unable to emerge into the mainstream media until the 80s, when public discrimination and persecution had dissipated. Drag characters were now being introduced in movies and TV shows, with the most famous being when drag queen Divine was cast as Tracy’s mother in the 1988 movie Hairspray. This period showed a level of acceptance, but rarely was a drag queen character written without being used for comedic effect, harking back to the trope of the pantomime dame.

In recent years, however, the presence of drag queens in the media has reached new heights, as shows such as RuPaul’s Drag Race pave the way for acceptance and representation. The show has been running since 2009 but only succeeded in expanding its audience in recent years, proven by its nomination for five Emmys in 2018. Turning to theatre – a domain more familiar to the drag queen – productions such as Priscilla: Queen of the Desert and Kinky Boots prove that the fierce energy and glamour of the drag queen can be paired with well-written characters full of emotional depth. 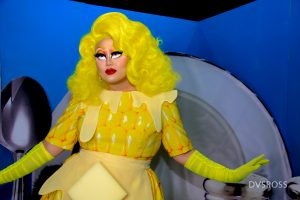 Most recently, the musical Everybody’s Talking About Jamie gave a fresh face to the well-worn coming of age story. It was this musical that had me reflecting on how far mainstream portrayals of drag have come, with this musical proving that a protagonist can be emotional, flawed, witty, endearing and a drag queen.

Based on the BBC documentary Jamie: Drag Queen at 16, the musical follows the story of a boy who dreams of becoming a drag queen and wearing a dress to his school prom. The musical does not shy away from the realities of Jamie’s endeavour, through his father’s reaction and the judgement of his peers, but the overarching message is always one of hope and pride. Everybody’s Talking About Jamie does equal justice to both the heart-breaking and fabulous sides of being a drag queen, depicting Jamie’s journey to self-acceptance in a way that resonates with everyone – drag queen or otherwise. In an era where many young people struggle with self-worth and acceptance, the fierce confidence of the drag queen proves to be an attitude we should all try adopting. 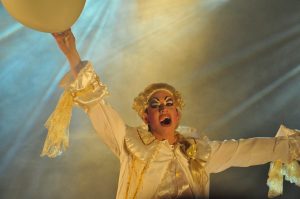 Drag queens may have once only performed for the LGBT+ community, but as time goes on their journey, passion and creativity reaches further and further, erasing the prejudice and stigma they face while promoting a hugely positive message of confidence and self-acceptance. It seems that the world is becoming a brighter place with every glittery drag queen that enters it.