Who offers the best online service: Nintendo, PlayStation or Xbox?

All images taken by me, except where stated otherwise.

Perhaps sadly, the days of free online multiplayer, at least if you’re playing on Nintendo Switch, PlayStation 4 or Xbox One, are over. Each requires a subscription for online play, but exactly what do they offer? If you’re keen on a gaming streaming service, a few of those are available, so we’ll consider them too.

I’ve discussed this service before, but it’s time to look at it more objectively. It costs £17.99 a year and launched September 2018. It’s required for online multiplayer and cloud save functionality, as well as voice chat (available through the mobile app only, unfortunately).

Ironically, the online part of Nintendo Switch Online has been criticised. It’s known for lagging, particularly with Super Smash Bros. Ultimate, but then again this isn’t really surprising: Nintendo has long been known for having online systems quite far behind the competition, so the Switch seems to be continuing this unfortunate legacy.

Cloud saves are also not implemented very well. Several games do not support them, like Splatoon 2, and it seems unfair (though increasingly the norm) to lock this behind a paywall. 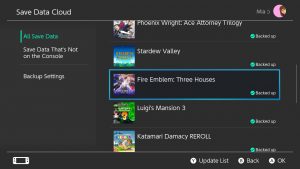 But on to some of the good parts of this service. You can get Nintendo Switch Game Vouchers: they cost £84 each and allow you to redeem, at a discount, two games available as part of the promotion’s catalogue, from the Switch eShop. Tetris 99 is also exclusively available with NSO – it’s a Tetris battle royale, essentially – and its existence is still astonishing to me (but I’m very glad it does exist).

However, the main perk of this service is clearly that it includes a selection of Nintendo Entertainment System and Super NES games, (54 NES and 31 SNES, as of now) with online multiplayer for many. Unfortunately, however, the original selection of NES games was underwhelming. There are classics, but they’ve been on pretty much every iteration of Nintendo’s Virtual Console for over a decade – the novelty factor is gone. Since the service launched more games have been added, nearly monthly, but this has been slowing down since the start of 2020, and several games are Japan-exclusive. What I will say, however, is that Dr Mario is a great puzzle game and is pretty much the only thing I’ll fire up the NES app for these days (sorry, Tennis). 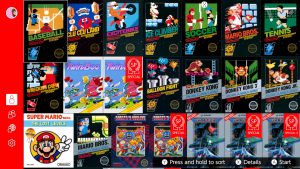 Some of the NES selection 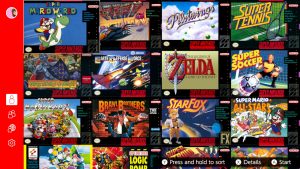 Some of the SNES selection

The September 2019 addition of SNES games at no extra cost, however, was when this service gained way more value. Though 85 (plus) games for £17.99 a year is good on paper, you might want to consider how many of those games are filler. Luckily, the SNES collection is pretty fantastic: games like Super Metroid, Super Mario World 2 (and its sequel, Yoshi’s Island), and The Legend of Zelda: A Link to the Past, all classics. Plus Donkey Kong Country was added in July!

In the (distant…) future, I’d love it if Nintendo 64 and GameCube games appeared on the service. The Switch could also do with greater online support in general to bring it more in line with the competition, whether it’s a Netflix app (it was on the Wii and Wii U, after all), or support for Twitch streaming.

Overall: this service has perks, but falters when it comes to the actual online multiplayer element, cloud save implementation, and voice chat. Thankfully it’s the cheapest of the bunch, but the only thing making it worth the money is the SNES collection, currently.

PlayStation Plus (PS Plus)

PlayStation’s offering costs £49.99 a year but is frequently available for less. It launched June 2010 and along with online multiplayer and cloud storage, it offers two free games per month. The games are popular titles, ones that you wouldn’t necessarily expect Sony would give out for free (well, kind of, given that you’re still paying for the service, and they’re only free for a month). It certainly differs from Nintendo, in that it’s almost unheard of for them to give out any of their AAA titles for anything approaching free. Though you might not like the two games on offer each month, the selection is generally very decent: the wildly popular Fall Guys was one of August’s games, and previous months have included Rise of the Tomb Raider, Uncharted 4, and Shadow of the Colossus. However, you cannot keep the games if your subscription lapses. 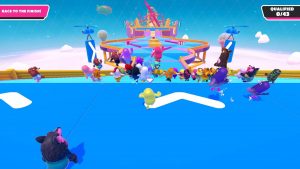 Aside from the free games, there’s discounts: you can get money off at shops like Nike, and various offers on the PlayStation Store.

PlayStation Now is another online service: you can stream a library of PS2/3/4 games to your console or PC, for another £49.99 a year – PS2 and PS4 games can be downloaded but not PS3 games (who’s surprised at that). It is a streaming service first and foremost, however, so you might have problems if you experience dips in your internet speed. It’s a shame that there are no PS1 games available with PS Now, too.

Overall: a better service than Nintendo’s, despite the price difference. Two free games a month may seem like less than what Nintendo is offering but they are frequently AAA titles, and almost always pretty new. Their online multiplayer is also implemented better and they don’t place absurd restrictions on voice chat.

Xbox Live launched November 2002 for the original Xbox and is available on both Xbox 360 and Xbox One. While Live in its basic form is free, you need Live Gold to play online or access cloud storage. A yearly subscription costs £49.99, far cheaper than paying quarterly (and it can be found for cheaper), but this isn’t available from the Microsoft Store. Also like PS Plus, you get ‘Games with Gold’: two Xbox 360 and two Xbox One. Past months have included games like Saints Row 2, the indie game Coffee Talk, and various Shantae titles.

Game Pass is the PS Now equivalent: a library of games for streaming. But what’s really special here is Game Pass Ultimate: Xbox Live Gold and Game Pass combined. You can currently get Game Pass Ultimate for a month for £1 (subsequent months cost £10.99), as well as Game Pass for PC, and any prepaid Live Gold or Game Pass subscription (max. 36 months) is upgraded to Game Pass Ultimate. That’s pretty cool. There’s also some cross-platform functionality with Live: games like Minecraft and Cuphead on the Switch let you earn Xbox Achievements. 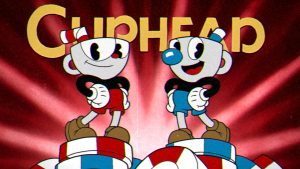 If you’re using Xbox 360, you get to keep the free monthly games should your subscription end, but this isn’t true for Xbox One. It’s a bit better than PS Plus, where you don’t get to keep any of them unless you renew.

It’s also worth mentioning (Project) xCloud, which launches in under a week: if you have Game Pass Ultimate you can play Xbox games on an Android device.

Overall: a very similar service to PlayStation, but that Game Pass Ultimate offer seems to edge out PlayStation in terms of value currently.

Xbox and PlayStation are much of a muchness. You have pretty great exclusives available with either service, so it’s a matter of preference. Nintendo, on the other hand, are doing something completely different and arguably (well, definitely) a bit worse. Though they’ve always had that good old Nintendo Charm and they do things a bit differently, the fact is that their service just doesn’t compete with the competition – it’s cheap and probably alright if you don’t play online much, but want the cloud saves and the retro games. However, many would rather pay more for a comprehensive service, and perhaps a Game Pass equivalent on top of that. In any case, Nintendo has some catching up to do.