Thoughts on the Nintendo Switch

If it wasn’t obvious by looking at my previous articles, I think the Nintendo Switch is pretty cool.

My childhood was more or less constantly accompanied by games. I can still remember the names of my first Nintendogs. I can also remember the time my dad was helping me set up my Animal Crossing: Wild World town, and upon being asked by Kapp’n “Where do you want to go?”, typed in “Home” and therefore doomed my town to being called “Home” (until it accidentally got deleted a few years later). Fresh in my memory, too, are the first few ‘mons I caught in Pokemon Pearl.

As I got into my teenage years, however, I started to drift (ha) away from this fundamental interest I’d had, because I’d managed to convince myself it was stupid and immature, and I played games only very sporadically for a few years.

So, the reason why I have so much appreciation for this console is because it reminded me of the love I used to have for video games. I got the Switch for my 18th birthday, along with The Legend of Zelda: Breath of the Wild and Mario Kart 8 Deluxe (thank you, GAME, for your bundles). And Breath of the Wild absolutely drew me in. I’ve never felt so immersed in a world in a game before, and it proved to me that Nintendo really had done something special, both with Breath of the Wild’s spectacular open world, and with the Switch. 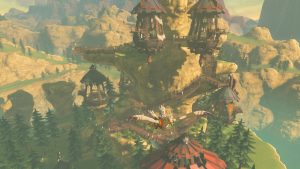 Rito Village, Breath of the Wild

This console is now three years old (its birthday was a few weeks ago) and still doing extremely well. Last year was a great year for the Switch, with several extremely popular big releases, such as Fire Emblem: Three Houses; Pokemon Sword and Shield; Luigi’s Mansion 3; and The Legend of Zelda: Link’s Awakening, and some unexpectedly popular indie games, like Untitled Goose Game. And this year? Well, the absence of any news of a full, general Nintendo Direct for over six months is becoming, um, a bit worrying. But we’ve got Animal Crossing: New Horizons coming out tomorrow, so who cares. 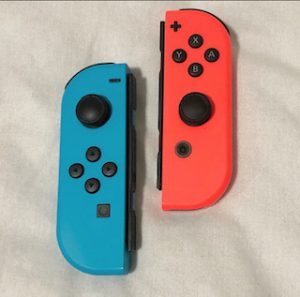 The Switch’s controllers, known as the Joy-Cons

Now, I want to talk about the Switch itself. Overall, yes, it’s really good, but as with any piece of hardware, it’s not without flaws. The fact that it is both a handheld and a home console still amazes me, and though the Joy-Cons are possibly just a bit small for adult hands when not connected to the console, they are great when you’ve got the console in handheld mode. The Pro Controller is fantastic if you’re after a more traditional controller, if a little expensive (and if we’re talking about expense, Nintendo probably need to be a bit more generous with their game prices, particularly games that were around in the Switch’s first year, because charging £50-£60 for these older games is arguably a bit cheeky, though they are, usually, worth the asking price). 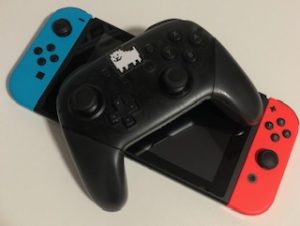 As much as I clearly like the Switch, I won’t just mindlessly praise it. The ‘drift’ (as I, and I do apologise for that, hinted at earlier), or inaccuracy that can occur over time, of the Joy-Con analogue sticks hasn’t happened to me yet, but I will admit that is a pretty massive problem, judging by how many people have reported it and had to send their controllers to Nintendo to get them fixed, or, indeed, resorted to trying to do a DIY repair themselves. Not great, really. Another thing I’m not so happy with is the total lack of themes for the Switch’s home menu: you can only set it to light or dark mode. I know, I know, this doesn’t really mean anything in the wider scheme of things, but to me the Switch doesn’t have much of its own identity. This becomes particularly clear to me when I compare it to the 3DS (which has a pretty huge selection of themes in its Theme Shop, all accompanied by music), and the SNES Classic, which has a menu bursting with personality. Even the Wii had that ambient music and TV channels thing going on with its home menu, and it felt appropriate when paired with the sleek, white console. But the Switch? No music, no themes, nothing. It’s a bit disappointing, especially when you compare it to the PS4, which has a wide selection of themes (much like the 3DS). And speaking of the Switch’s competitors… 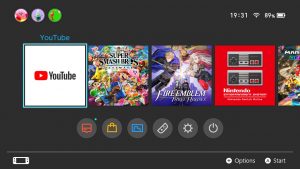 Obviously, obviously, the Switch can’t stand up in terms of graphical capability to the PS4, Xbox One, or PC. I was reminded of this when playing Devil May Cry 5, which uses the endlessly impressive RE Engine, on the PS4 when I went home a few weeks ago. That game astounded me in terms of how real it looked, how stylish it was. It pretty much goes without saying that the Switch wouldn’t be able to manage a game like DMC 5, but, well, if you compare the two consoles side by side, you have to remember that it was never meant to. The PS4, after all, is a dedicated home console, and though it came out a full three and a half years before the Switch and is capable of better graphics, they were not designed to be comparable. While it’s true that the PS4 can be played remotely using devices such as the PS Vita or tablet, and that’s pretty incredible, you’re still streaming it from the main console: the Switch, on the other hand, is just one console that can be both portable and a home console, and consequently it’s much smaller and it has to be less powerful.

Switch games, therefore, don’t generally go for realism. You usually end up with a kind of cartoon-like style which still looks pretty great, like the Mario and Kirby games, or semi-realistic, anime-like games like Fire Emblem and Breath of the Wild. That’s not counting ports of older games, like the selection of Resident Evil games available on the e-shop, or even Ni No Kuni: Wrath of the White Witch, which is a beautiful game originally on the DS before it was remade for the PS3, but since they’re ports, and of previous generation games at that, that’s another story for another time. 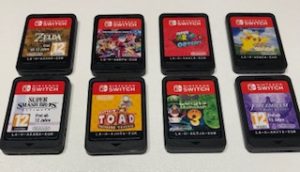 My collection of cartridges

The late Gunpei Yokoi’s philosophy of ‘Lateral Thinking with Withered Technology’ is, I think, particularly clear with the Switch – this is the idea that a console or game doesn’t have to be the most advanced to still be fun, and what matters is using what you have in an inventive way. Does Breath of the Wild’s open world experience suffer from the hardware it’s on being comparatively less powerful? Of course not: though there’s a bit of a frame rate problem in certain areas, the game’s art style is what matters, and it’s gorgeous. You don’t play games like Mario Kart 8 to be blown away by the graphics: you play them to have fun.

So I’d like to finish this look at the Nintendo Switch by saying this. Though it has its faults, I appreciate this console enormously, and it has brought me and countless others a lot of joy over the last couple of years. I hope it continues to flourish, and with new releases like Animal Crossing: New Horizons, as well as the Breath of the Wild sequel coming in the hopefully not-too-distant future, I think things are looking good for Nintendo’s very small, mostly robust, endlessly surprisingly hybrid console.