Persona 4: Dancing All Night is a rhythm game released for the PS Vita in 2015. Now is not the time to discuss how much of a tragedy it is that the Vita never really reached its full potential, so I’ll get straight into the dancing.

A rhythm game based off of a turn-based JRPG might sound like a bit of a weird decision at first, but bear with it. The gameplay is simple in concept: using the console’s face buttons and analogue sticks, hit the notes coming from the centre of the screen, as they reach the corresponding notes on the outer ring, in time with the music. If you’re bang on, you get ‘perfect’; slightly off gives you ‘great’; way off and you’ll get ‘good’; and missing the note entirely gives you ‘miss’ (I hope that last one isn’t a surprise to hear).

You build up a combo by getting perfect or great notes. There are also scratches, which require flicking the analogue stick when prompted by a blue ring, and Fever rings, which operate like scratches but they build up the Fever gauge. When it is full it unlocks a portion (usually two, one near the start and one near the end) of the dance where another dancer joins you for a short time. Getting a ‘good’ will not break your combo during this phase, whereas normally, it does. 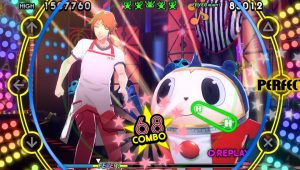 The game starts with three difficulty settings: easy, normal and hard. All Night mode can be unlocked later on, which is the highest difficulty, but I haven’t unlocked it yet. If you’re new to rhythm games (as I was, believing myself to be completely hopeless at anything requiring a sense of rhythm until I actually tried it), there is absolutely no shame in starting on easy. I progressed to playing on normal difficulty in a day or so, and I have ventured into hard difficulty once or twice, but in my opinion, on many songs, there is quite a massive jump (larger than you might expect) between normal and hard difficulty. 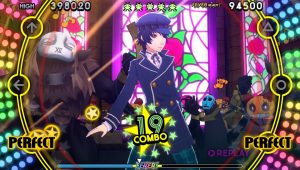 One thing I have noticed is that some notes feel a little off-beat, and hitting the note when you think you should isn’t necessarily what the game wants you to do. However, getting better at the game has for me reduced these occasions, so it is probably inexperience, at least to some extent.

Since the premise of this game is that you are performing to make Shadows happy, clearing the stage is dependent on ensuring they are pleased enough with your performance. You can keep track of how happy they are with the gauge at the top of the screen:

If the gauge is green or rainbow by the end of the performance, you’re fine. However, if the gauge is white or red by the end, you may finish the performance but you won’t clear the stage. If you miss many notes in a short space of time, the Shadows get really unhappy and the performance will probably end prematurely. To make the pain worse, you’ll get an achievement for it the first time it happens. Not my proudest moment. 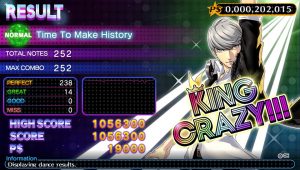 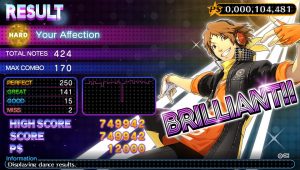 I’m aiming to get a King Crazy on every song in normal mode, but it’s just one slip and you’ve got to try again if you’re going for perfection. It is obvious, therefore, that this endeavour requires playing songs multiple times. This is made so much easier by the fact that the tracks in this game are fantastic. Along with a selection of songs from Persona 4 and Persona 4 Golden’s soundtracks, there are remixes, as well as a few picks from other spinoffs, such as Persona 4 Arena’s theme. The best songs on the game, in my opinion, are:

-Like a dream come true (a surprisingly good jazz rendition)

-MAZE OF LIFE (the theme of Persona Q)

Of course, this game wouldn’t be a Persona 4 spinoff without the lovable cast, and the gang’s all here in this game, with a new character, Kanami, appearing in the story mode. The story mode is OK, I suppose: it’s fully voiced, which is impressive, but in my opinion, it’s too long and not really engaging enough.

The current dancer receives off-screen encouragement from everyone else, especially during Fever. Highlights include Kanji taking it upon himself to yell ‘YEEEAAH’ randomly, and Teddie’s, uh, proclamation of ‘Now this is male bonding!’. There are also some wonderful nods to specific occurrences in and details from Persona 4. This is probably my favourite aspect of the game because the personalities of each character really shine through.

I really like the attention to detail in the menus, too: for example, if you sit on the title screen, the menu music sounds muffled, as if you’re outside, but when you ‘press any button’ to enter the menu the music comes through full force, like you’ve gone inside. There’s also a high level of customisation, with the opportunity to buy many different costumes for everyone. Most of these are the character’s seasonal outfits, but certain costumes, such as the Halloween costumes, may prompt a less-than-pleased reaction. 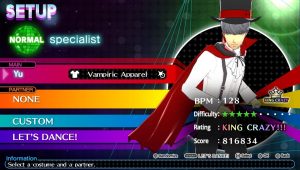 So, all things considered, this game is a lot of fun. It’s a solid rhythm game on its own, but to get the most out of it you absolutely have to be familiar with Persona 4: it’s so packed with references and they really amplify your enjoyment of the game. The soundtrack is truly fantastic and the character interactions make me smile. The game proved popular enough to warrant the creation of dancing games for Persona 3 and 5, Dancing in Moonlight and Starlight respectively, and based on how much I like this game I am certain I will enjoy those too.