Some minor spoilers for the early game of Fire Emblem: Three Houses.

I’m perhaps a bit late to the party here, but I finally started playing Fire Emblem: Three Houses in January. Emphasis on started, because I’m only a few hours in (unfortunately, my essays have somewhat interfered with my ability to make progress). Despite that, I’ve formed an opinion on the very early game and I’m here now to talk about it. 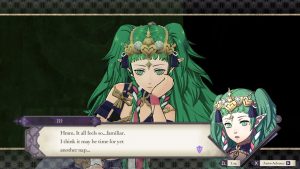 It should be said first that I’m not new to Fire Emblem. I’ve played about half of Fates (Birthright, not Conquest) and Awakening, so before going into this I had a pretty decent idea of how the gameplay generally works. It is turn-based strategy, so you select an attack and you get a forecast as to how effective it will be. At the start of a stage, you’re given an objective, usually Rout the Enemy (defeat everyone not on your side, basically), but there are some maps involving escorting a character to safety, or defeating a boss. You have to think tactically, moving each of your units one at a time during your turn, in order to complete the objective. Then the enemy has their turn and it progresses like this until someone wins. There are different classes and abilities that your units can have, for example archers, axe-users, healers, and sword-users. Of course, if you can defeat enemy units, the same can happen to your units, and if you’re playing on Classic Mode then you have to deal with permadeath, which means your unit is, as the name suggests, permanently dead. Or you can play on Casual and they just come back again in the next chapter. Fates actually featured Phoenix Mode, wherein fallen units come back immediately, but I always thought that was a bit pointless. 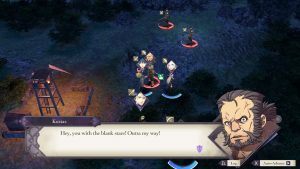 The first map in the game

So in this game, you play as Byleth. This is the default, ‘canon’ name: you can name them whatever you like. This blue-haired protagonist can take a male or female form depending on your choice at the game’s beginning.

Byleth is a young mercenary who has a dream featuring a strange person with the appearance of a young girl with green hair (we quickly find out she is called Sothis). Sothis insults Byleth a bit, says some cryptic stuff and then, Byleth wakes up. Byleth, along with their dad (also a mercenary), encounters a group of three teenagers fleeing bandits. 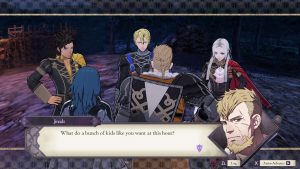 Claude, Dimitri, and Edelgard talking with Byleth and Jeralt

It turns out that these three are in fact the heirs to their respective homelands: the Adrestian Empire; the Holy Kingdom of Faerghus; and the Leicester Alliance. You have Edelgard, the clever but seemingly aloof future emperor; Dimitri, polite but clearly masking some sort of inner darkness; and Claude, who is extremely charming, yet doesn’t seem to take much seriously. You get a pretty standard tutorial, but straight after, Byleth saves Edelgard by taking a fatal blow, and we discover two things: Sothis is somehow resident inside Byleth’s head, and she is capable of rewinding time, meaning that Byleth can evade the blow before it even happens. Thanks to Byleth’s apparent aptitude, they score a teaching gig at Gareg Mach Monastery, or the Officer’s Academy, where the three heirs are currently being educated. Good job! 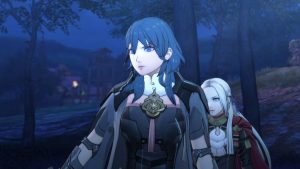 Byleth and Jeralt go to Gareg Mach and Byleth meets Rhea, the archbishop of the Church of Seiros, as well as Manuela and Hanneman, both of whom are instructors at the Academy. Byleth is then invited to explore the monastery in order to track down the three house leaders and speak to the students of each house.

This isn’t just for fun, or simply to introduce yourself to everyone. No, you have to choose one of the three houses after you’ve met everyone, because you can only instruct one house, and you are locked into a specific route due to your decision. Your choices are the Black Eagles, led by Edelgard; the Golden Deer, led by Claude; and the Blue Lions, led by Dimitri.

Going around talking to everyone and trying to make my decision took such a long time for me. Each house gave me so many reasons to like them: how on earth could I pick? Even from the brief introductions you get to each student, their personalities are evident, and it’s really nice not just to have a slew of generic characters, as can easily be the case in games with large casts (since each house has eight students, and there are various non-student characters you can interact with too). Some of the introductions absolutely cracked me up. For example, Linhardt: 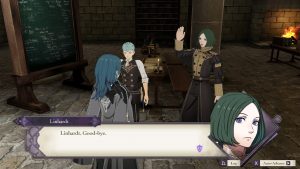 Of course, the house leaders are the most fleshed-out of everyone, and based on my impressions of those three, I chose to teach Dimitri’s house, the Blue Lions. 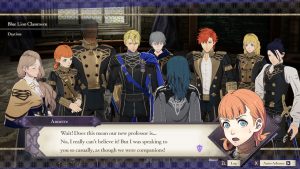 Why? Well, I liked the dynamic between Sylvain, Felix and Dimitri, and thought Mercedes was extremely sweet. In fact, one thing I thought was great was the friendships amongst the students: it made the school setting feel that much more realistic. 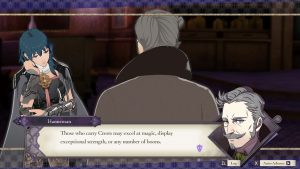 After picking a house, you end up talking to Hanneman about crests, which allow the bearer to wield various special abilities. Byleth clearly finds this fascinating

This moves you on to your first chunk of free time. You don’t get that long, but you’re allowed to explore the monastery and get to know people a bit better. In this section, some people, upon speaking to them, give you quests to do, which serve as introductions to the main features of the monastery: the greenhouse, the fishing pond, and the dining hall. Flayn, for example, asks you to catch a fish for her, and the fishing minigame is surprisingly fun: I can easily see Byleth’s teaching responsibilties going out the window in future. 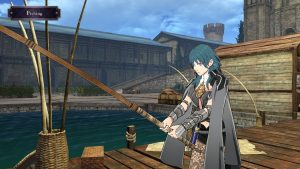 Once your time exploring is over, Byleth very quickly has to lead their house against the other two in a mock battle. ‘Oh, OK,’ I thought, ‘this can’t be too bad.’ The preamble, wherein Claude and Edelgard join in on Dimitri and Byleth’s discussion, made me start to worry. 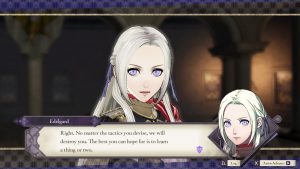 I thought this was just a mock battle!

And that’s where I got up to. I’m making use of the Bookmark feature, which allows you to save during battle (but these saves can only be reloaded once, in case anyone tries to abuse this feature).

So, that’s the first few hours of Fire Emblem: Three Houses. At the moment, I’m really enjoying it: I like the social simulation, day-to-day hanging around at the monastery just as much as I like the turn-based strategy of the battles. It certainly makes a change from previous Fire Emblem games, where the only real break you got from battles was cutscenes. I think the battles run as smoothly as previous installments, but, in conjunction with the effort put into the social simulation side of things, the difficult and technical stuff in battles seems to be explained a bit better here, making this title really accessible. I look forward to playing more.