The Dreamcast: the swan song of Sega consoles

The Dreamcast was Sega’s final console, released in 1998 and discontinued in 2001. It wasn’t bad by any stretch – the graphics were impressive, it was pretty advanced for the time (for example, it included a modem for Internet connection), and it had some really great games. But when it was discontinued, Sega left the console business for good, and became a third party developer in 2002. 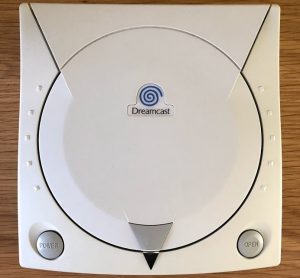 So what happened? To understand, we need a history of Sega.

Sega’s console career began in 1983, with the unsuccessful SG-1000. However, they had success with their arcade ventures, and limited success with their Master System console. They really picked up speed with the release of the Sega Genesis, or Mega Drive, in 1988 (1989 in America and 1990 in PAL regions).

As a 16-bit console it competed with Nintendo’s SNES, but preceded it by a few years. The rivalry that developed between Nintendo and Sega created an iconic advert: “Genesis does what Nintendon’t”. During this era, Sega was going for more of a teen-oriented, edgy, cool image, to contrast Nintendo. This campaign is truly fascinating because it just wouldn’t happen today: the rivalry between Playstation and Xbox is still there, but it’s tame in comparison to Sega’s boasts of “you can’t do this on Nintendo!”.

The edginess (and sales success) continued with the Genesis version of Mortal Kombat – this version allowed for the input of a code that made it as gory and bloody as the arcade version, whereas the SNES version didn’t have this capability. In fact, the Genesis version of Mortal Kombat and another game called Night Trap (for the Sega / Mega-CD add-on) led to the 1993 congressional hearings, concerning children being exposed to violence in video games. The ESRB was consequently founded in America, and was followed by other rating systems elsewhere.

So who won the war? Sega’s main mascot and most recognisable character Sonic the Hedgehog first appeared in 1991 with the game of the same name, and this success gave them a mascot that was on a par with Nintendo’s Mario. But in the end, Nintendo sold more than Sega (nearly 50 million units vs 30.75 million units worldwide). 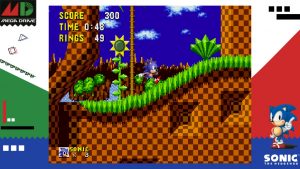 Sonic the Hedgehog: taken from the Sega Ages release on Nintendo Switch

The Genesis / Mega Drive was followed by the Sega Saturn in 1994 (1995 in America and Europe): the beginning of the end. It was slated for release in America in September 1995 (on ‘Saturnday’) but during E3 in May of that year, its price was revealed as $399 and it was also announced that 30,000 units had already been shipped to places like Toys ‘R’ Us and Walmart – which was a complete surprise to places like Toys ‘R’ Us and Walmart. The PlayStation, the Saturn’s biggest competitor, was also due to launch in September 1995 in America and Europe, and immediately after this revelation, the PlayStation’s price was announced:

Needless to say, the combination of the Saturn being released without warning and the $100 price difference meant that the PlayStation stomped all over it. The Nintendo 64’s 1996 release finished the Saturn off. 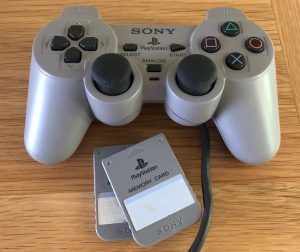 The original DualShock controller for the PlayStation (plus memory cards)

So, the Dreamcast ended up being Sega’s last hope. The Saturn had been expensive to make and a commercial failure, so the Dreamcast needed to be made cheaply. It was developed with that in mind and its UK launch price ended up being £200 ($199 in America). The 1998/99 launch was pretty good, but sales dropped off. The hype that was created around the upcoming PlayStation 2 was a problem: Sony really boasted about the power of its ‘Emotion Engine’. The PS2 launched in March 2000 and had its Western release later that year, and did extremely well, largely due to the trust in the PlayStation brand established by the success of the first console – trust that consumers lacked when it came to Sega. 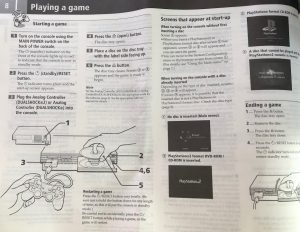 From the PS2 instruction manual

The price of the Dreamcast was dropped several times to salvage the situation, but Sega kept losing money. On January 31 2001, Sega announced the Dreamcast was being discontinued at the end of March, and with it Sega’s life as a console manufacturer. The Dreamcast ended up on clearance to get rid of the remaining stock.

So the main factors in the Dreamcast’s discontinuation were Sega’s past mistakes, and the pressure from its rivals. But the Dreamcast has some fascinating features: the aforementioned modem for Internet access was a big one. The controller also featured the VMU, or Visual Memory Unit – the Dreamcast’s memory card. The official VMU had a built-in LCD screen and could have mini-games loaded onto it, like Breakout, and even a virtual pet game (Japan exclusive, sadly). I think the VMU is fun, innovative and unique, given that it was just a memory card. 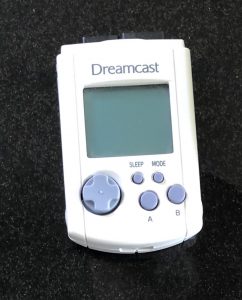 The controller’s design is… unusual. Of course, nothing could ever be weirder than the Nintendo 64’s unique controller design, and contrastingly you have the PlayStation’s Dual Analog and DualShock. The Dreamcast, meanwhile, goes somewhere in the middle. To me, it’s hard to hold comfortably, and doesn’t quite fit into the hands as well as the DualShock does (another point to Sony…). But it’s not unusable: you find you get used to it as you play. 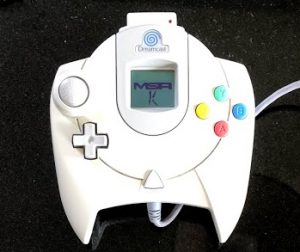 The Dreamcast controller, with the VMU displaying the logo of the current game

There’s not really much to say about the Dreamcast’s actual design. It’s not sleek like the black PS2 – it actually resembles the first PlayStation more than anything else – but this off-white box has a certain bulky charm. With the logo, Sega took a step back from their edgy 90s image and went for something simple, even whimsical, with the blue swirl (red in America) and basic font. The console startup screen is also different, moving away from the classic ‘Seeegaaaa’ logo of its predecessors. It’s so obvious that Sega were trying to distance themselves from the Saturn’s failure, and create a brand new image for the Dreamcast. 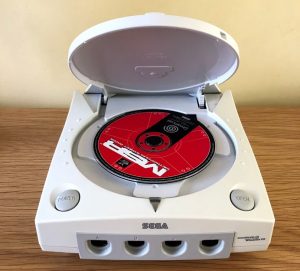 Of course, the Dreamcast had an amazing library. It had many identical ports of arcade games, like Soulcalibur, Virtua Fighter and Crazy Taxi (a hugely popular arcade game, involving dropping off people at their destinations as quickly as possible). Sega’s creativity at that time is evident: Jet Set Radio was acclaimed for its artstyle and soundtrack, and Shenmue, though expensive to make, had enormous scope and was innovative too, essentially inventing the quick-time event. Sonic Adventure was Sonic’s 3D debut, and though the 3D games have been a mixed bag, it was a strong start. Metropolis Street Racer is a racing game, operating around the ‘Kudos’ system, where you gain points for stylish manouevers. Resident Evil Code: Veronica was a darker game for the console and was also acclaimed, though due to the Dreamcast under-performing, it had lower sales than previous games in the series. 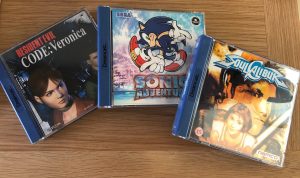 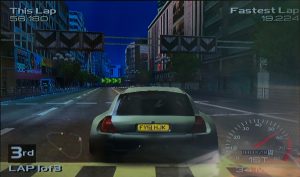 That, sadly, was the main problem with Dreamcast games. Though it had some gems, about three people actually bought the console, so the user base was small: however, the games were often ported to other platforms later, so at least they were not stranded on a failed console. But if Sega hadn’t messed up so much during the 90s, maybe the Dreamcast wouldn’t have been a failed console. Shifting to just game development was wise and Sega has found success in this, but it’s easy to wonder how Sega’s future might have been. Would we have seen a ‘Dreamcast 2’?

The Dreamcast is a fascinating console, the culmination of both Sega’s successes and its failures. It deserved better but its existence is emblematic of Sega’s charm and defiant nature, and it has a cult following even to this day.

And I mean, the VMU’s screen almost makes the controller like a Wii U gamepad prototype, which is pretty cool.

So maybe you can do this on Nintendo.