The featured image and all screenshots were taken by me.

The NES and SNES games included with the Nintendo Switch Online subscription are, in my opinion, what makes the service worth the £18 a year price tag. Don’t misunderstand: I do really like knowing my save data is safe and backed up to the cloud, because the thought of losing the 100+ hours I poured into Breath of the Wild makes me break out in hives. That fear alone was enough to finally spur me into buying a membership over the summer months. But I feel like a save data backup service probably should be a service that is free of charge and available to all. It would seem, though, that very few things in life are free, and I suppose not losing all your save data if something happens to your Switch isn’t one of them. 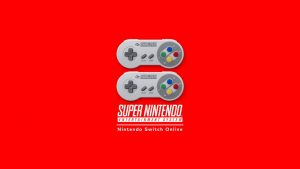 When Nintendo announced in their September direct this year that Super Nintendo Entertainment System games were being added to their online service along with the existing Nintendo Entertainment System games on there, I was beyond delighted. You see, I appreciate the NES for essentially saving the video game industry back in 1985 and seeing the introduction of many iconic series as we know them today, not least the Super Mario Bros and the Legend of Zelda games. But the SNES is my absolute favourite retro console. The 16-bit graphics are timeless, I especially enjoy the distinctive soundtracks that so many of its games have, and the console’s PAL design is aesthetically appealing to me.

The NES games as part of the service when I bought my Switch Online subscription were only alright in my view – there are some great games on there, true classics, and then there are a load of NES sports games, which really just are not very appealing to me. Apologies if your favourite game of all time is NES Soccer or whatever, but it’s not my thing.

Given that my interest mainly lies with the SNES selection, that will be my focus here. But first… 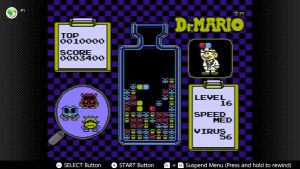 Dr Mario is a fantastic puzzle game. Mario has somehow found time to qualify as a medical professional – if lobbing pills into a bottle stacked full of viruses counts as that. Your job is to move the pills from left to right with the analog stick and rotate them with the A button as they fall through the bottle at either a slow, medium or high speed (depending on what speed you set at the start of the level), and line them up with a virus of the same colour as the pill – connect a line of four or more and any viruses in the row vanish. To clear the level, you need to clear all of the viruses from the bottle, and you can only get a game over by spectacularly messing up and blocking the neck of the bottle with pills, something that is particularly easy to do on the later levels, especially at medium or high speed, since the viruses stack higher and higher as the levels progress. 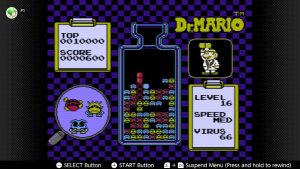 It is very similar in essence to Tetris, with equally catchy music: you get to pick from two tracks to listen to throughout the entire game, namely ‘Fever’ and ‘Chill’ (‘Chill’ is my go-to choice but I can easily see the case for ‘Fever’). Dr Mario is a great puzzle game and that’s all it tries to be, so it’s probably my favourite NES game available on the service. Just don’t play it late at night, or you’ll see pills and viruses behind your eyes when you try to sleep, and you’ll probably dream about it too. Speaking from experience. 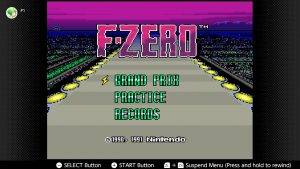 I’m including this game in this list instead of Super Mario Kart because they’re both racing games. Despite the fact that I have a lot more affinity for the Mario Kart series than I do for F-Zero (if the ancient Captain Falcon memes don’t count), the almost-3D effect does something awful to the backgrounds in Super Mario Kart and it makes me dizzy when I play it. I can just about cope when I’ve got the console in handheld mode, but when I’m playing on the TV, I can’t do more than a Grand Prix without feeling like I need to lie down. Weirdly, F-Zero doesn’t do that to me, so it’s my go-to for a SNES racing game. It’s much faster than Super Mario Kart and ‘Mute City’ is an excellent song. 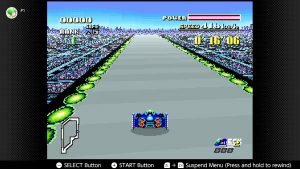 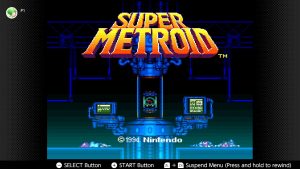 Now, I’m cheating a bit on this one because I in fact started Super Metroid on the New 2DS’s Virtual Console, not on the Switch. However, it’s exactly the same game, so I don’t see a problem talking about it here. 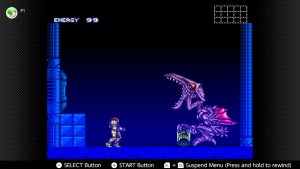 This game is basically unrivalled in its atmosphere, the music is fantastic, and it has an incredibly cinematic, ‘story so far’ style introduction that really makes Super Metroid feel more like a film than a game. Unfortunately, last time I played this I got stuck, so I really should go back to it soon to figure out where I messed up. But if you like games with a futuristic, desolate atmosphere, you need to play this. 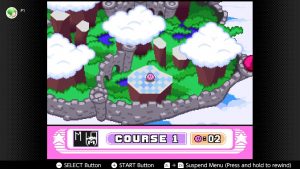 There’s not much to say about this one: it’s a miniature golf game where Kirby himself is the golf ball. It’s obviously delightfully weird, being a Kirby game, and what’s great about it is that it so clearly is a Kirby game: the soundtrack and overall presentation make it clear that it’s not just a generic golf game using Kirby properties. For a bit of a different choice, I’d recommend this. 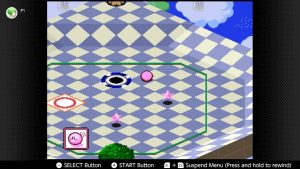 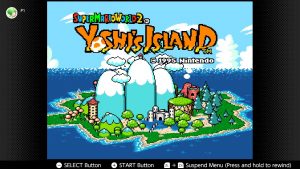 Yoshi. My favourite character of all time. This game is why I haven’t actually touched many of the SNES games available, despite my love for the console: it’s the SNES game I wanted to play the most, and have I. Your goal, or rather the goal of the wider society of Yoshis, is to reunite baby Mario and baby Luigi after baby Luigi was taken by Kamek. 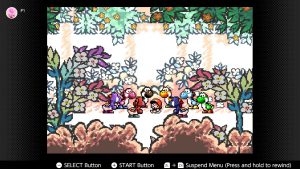 It’s the perfect Yoshi game: it’s adorable, has a beautiful art style, and exactly the right level of challenge. Seriously, the art style is so unique: it looks hand-drawn and fits really well with the game’s bright, colourful aesthetic. It really makes me wish you could actually visit – in fact, if anyone is aware of any holiday packages to Yoshi’s Island, let me know. 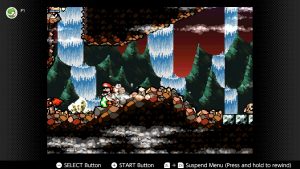 This makes me wonder what console Nintendo will decide to represent next as part of Switch Online, if any. Nintendo 64 games are chronologically next in terms of home consoles, but I think the Game Boy line might actually be next, perhaps to draw attention to how the Switch is both a handheld and home console. I’m looking forward to the potential next decision, but as long as I’ve got Yoshi’s Island, nothing can disappoint me.