All screenshots in this article and the featured image were taken by me.

The most important thing to remember is that in Persona 4, the Shadow Self represents the side of yourself that you have tried to suppress, the qualities you don’t want to accept as part of you. Each party member, except for the silent protagonist, has a Shadow that is found within the TV World: the Shadow Self appears as indistinguishable from their real-world counterpart, aside from having yellow eyes and a purple aura. You must defeat the Shadow Self of your party-member-to-be because when the affected person refuses to accept their Shadow as a part of them, it turns into a monster. In defeating them, they accept their Shadow Self, turning it into their persona (the manifestation of their ‘true self’, now that they have accepted the qualities they don’t like as a part of them), and they join your team. It feels as though the bond within the Investigation Team is extremely strong because they have all seen each other’s Shadow Selves, and they all helped each other accept them. 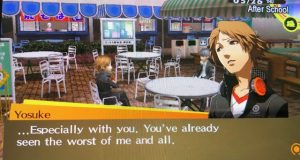 This brings us to Kanji Tatsumi. He is known locally as a delinquent and is feared by many, including the Investigation Team (despite the fact he is a year younger than them). They work out he is probably going to be the next victim, and therefore attempt to save him before he is thrown into the TV. However, they are too late: Kanji’s Shadow appears on the Midnight Channel and the team have to enter the TV to rescue him.

It transpires that Kanji, despite his outward appearance as a tough delinquent, enjoys knitting, painting, and crafts. Girls especially are cruel to him for this because these aren’t ‘manly’ hobbies and as a result, he feels shame. He is, therefore, reluctant to associate with girls. Furthermore, Kanji is confused about his feelings towards the ‘slender young man’, with whom he had spoken to before Kanji’s disappearance and who had shown an interest in him (it turns out this person was assisting in investigating the disappearances). All of this creates Kanji’s Shadow, a reflection of Kanji’s confusion and his worry about how others perceive him: Shadow Kanji states that he prefers men because men don’t gossip about him as women do. It appears to be a reflection of not only all his negative feelings towards himself but the negativity he has experienced from everyone he interacts with. 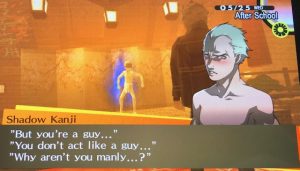 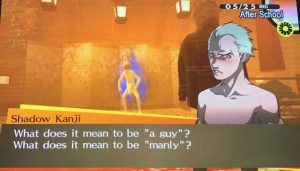 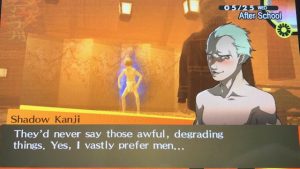 Shadow Kanji is for me the most interesting Shadow Self encountered so far. The previous Shadow Selves encountered were as follows: Shadow Yosuke was born from Yosuke’s frustration at being bored and trapped in a small town like Inaba; Chie is Yukiko’s best friend but she feels like the only thing she is good for is protecting her, and that to lose Yukiko would mean she is useless, thereby creating Shadow Chie; Shadow Yukiko came from Yukiko’s anger at her dependency on others and the expectation that she takes over her family’s inn when she is older. While these are all incredibly well-done, and thankfully don’t feel at all contrived, Kanji is fascinating on a more emotional level. For Kanji, feelings of confusion and shame didn’t arise from encountering the Shadow Self, as with the others: those feelings are what created it. 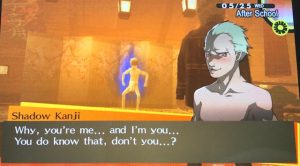 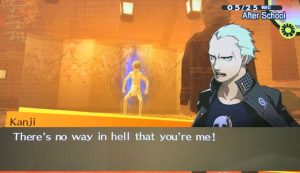 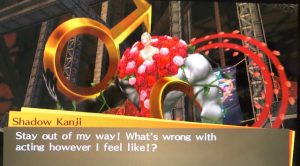 What is interesting as well is that the Investigation Team (apart from the silent protagonist, of course) react with something approaching fear when they first begin investigating the place in the TV World where Shadow Kanji is to be found – this dungeon is referred to as the “Steamy Bathhouse”, with the previous dungeon being “Yukiko’s Castle”. It is not just fear about the enemies they might encounter, too: it is certainly fear tinged with discomfort and, to a great extent, embarrassment. Yosuke especially is vocal about this, not only before Shadow Kanji is defeated but long after, too. In the immediate aftermath of Shadow Kanji’s defeat, Kanji does not immediately accept his Shadow as part of himself, partly because he (as well as the Investigation Team, it seems) regards it as embarrassing. One of the things Shadow Kanji does here is to declare that the protagonist, Yosuke and the real Kanji would make ‘wonderful boyfriends’. This is how Yosuke reacts: 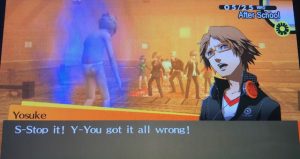 Now, you can read into this however you wish to. Is the reason for Yosuke’s discomfort that he didn’t expect Shadow Kanji to address him specifically? Or is he being forced to question his own feelings? Or, is homophobia involved in this apparent knee-jerk reaction? Yosuke later expresses concern that the protagonist and himself are not ‘safe’ if Kanji sleeps in the same tent as them during the school’s camping trip. 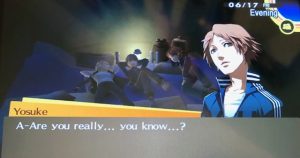 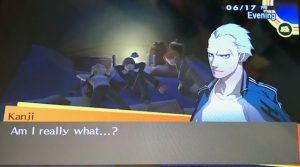 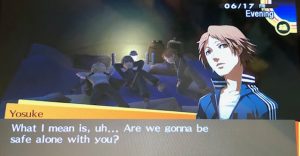 Yosuke makes several similar digs at Kanji throughout the course of the game, at least up until the point I’m at in my playthrough. This is certainly intentional on the part of the writers, so why make Yosuke, a character who you’re supposed to like (as your party member and a Social Link), say things that make him unlikeable? In a game literally all about accepting your true self and coming to terms with it, why does Yosuke make an effort to alienate Kanji for something that isn’t his fault? It’s confusing to see the game’s main theme apparently contradicted so many times.

Although Persona 4’s writing sometimes fails to fully articulate the issues at hand with regards to Kanji, I look forward to seeing Kanji’s character develop further in the form of his Social Link. Regardless of the ambiguity surrounding exactly what Kanji’s Shadow was truly meant to represent, and the issue being handled quite embarrassingly poorly at certain points in the game, it undeniably provokes discussion about the difficulty surrounding confusion over identity. 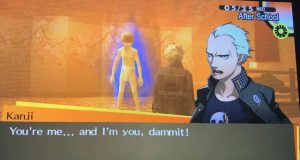 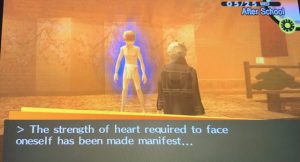 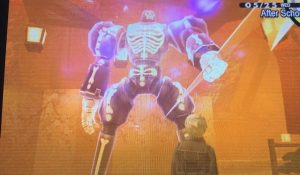