Super Smash Bros Ultimate is a massive game. I’ve discussed this at length before but to reiterate: the character roster is a major contributing factor to how big this game really is.

They really weren’t lying when they said ‘Everyone Is Here’.

So with a game with so many fighters, the last thing you’d probably think would be necessary would be more of them, surely? Well, regardless of whether it is necessary or not, series creator Masahiro Sakurai decided he wasn’t going to stop at bringing back every fighter ever and introduced the Fighter’s Pass, consisting of five Challenger Packs: five new fighters as paid DLC, five stages associated with those characters, and an assortment of music tracks for the new stages. You can buy the Fighter’s Pass to get all the characters, stages and tracks together for a bit less than buying them individually.

When it was announced, I thought the Fighter’s Pass was a good idea. As far as DLC goes, you get quite a bit of bang for your buck. Of course, you can buy Challenger Packs separately, something I personally thought was a necessary option back when every fighter in the Pass hadn’t been revealed. But for those who can’t stand seeing their character roster incomplete, who are itching to play as a new character and maybe even find a new main, it’s great: just as long as you were OK with the element of surprise (and you like saving money, which I think is something we can all get behind). The inherent mystery is obviously the biggest drawback: throughout last year, you were paying for something you didn’t fully know the content of.

Of course, that surprise is no longer a factor: all characters in the Fighters Pass are now out, and you can buy the Pass with full knowledge of what you’re paying for. Is that less exciting? Maybe a little. But let’s look over these fighters: I’ll mainly be discussing the reveals because to me, that is the most interesting aspect of these DLC fighters. 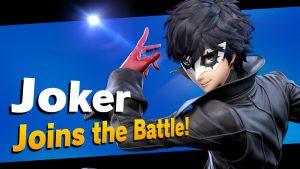 So Joker from Persona 5 was revealed at the 2018 Game Awards, in December of that year. Obviously I’m biased here – Persona 5 is one of my favourite games – so I’ll try to keep it brief, but this is probably my favourite reveal. The trailer was wonderfully creative, framing the reveal as Joker infiltrating the Game Awards like he infiltrates Palaces in his game, and of course, there was red everywhere. As the first Challenger Pack to be revealed, the excitement was through the roof: what a way to kick it off! The inclusion of Mementos as a stage was a great decision: the inclusion of Persona 3 and 4 music (selecting a Persona 3 song colours Mementos blue, that game’s main colour, and yellow in the case of Persona 4) was an even better one.

The next two fighters were both revealed during the Nintendo Direct for E3 2019: Hero, from the Dragon Quest series, and Banjo-Kazooie. I don’t have a lot of affinity for Dragon Quest, but Hero was fairly warmly received as far as I remember, as a reasonably solid choice representing a series iconic enough to deserve a place in Smash.

Now Banjo-Kazooie, on the other hand, sent everyone wild. Finally! The trailer was absolutely incredible, with a wonderful callback to Rare’s association with Nintendo: Donkey Kong, Diddy Kong and King K Rool are all just hanging out when a golden puzzle piece (a Jiggy) bounces across the ground past them. There’s a fake-out reveal of Banjo’s silhouette (that turns out to be Duck Hunt), and then suddenly, just when it seems like Nintendo decided to play an extraordinarily cruel joke or something – Banjo appears, launches Duck Hunt out-of-frame and Banjo-Kazooie is revealed as Challenger Pack 3. That’s how you do a reveal. I didn’t grow up with Banjo-Kazooie, but I am more than aware of the importance of Banjo to so many, and I really did feel everyone’s joy when Spiral Mountain started playing.

Terry Bogard was next, revealed in September 2019’s Nintendo Direct. Many people in the West probably don’t know a whole lot about SNK, the Neo Geo, or indeed Fatal Fury (Terry’s home series), myself included, but any opportunity for broadening your horizons should be taken, and I think Terry is a good choice. I liked the reveal trailer, largely because it uses Fatal Fury’s art style: the Smash invite passes by other characters from Fatal Fury before being taken up by Terry. 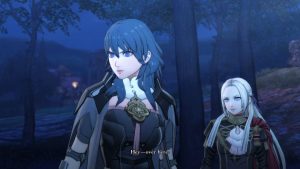 Byleth as she appears in her home game, Fire Emblem: Three Houses (you can also play as male Byleth, both in this game and in Smash)

Challenger Pack 5 was Byleth from Fire Emblem: Three Houses, revealed a little over a month ago in a live stream from Sakurai. Now, this was a contentious choice. People were really not happy with Byleth’s inclusion, mainly because they think there are too many Fire Emblem characters in Smash. It’s true, there are a lot, and the Fire Emblem representatives are criticised for being just replicas of each other: a surplus of sword-fighters, if you will. At least Byleth breaks the mold a bit, by having a choice of different weapons. However, the inclusion of these characters doesn’t rule out your favourite from getting in, and it’s far from the truth that one character ‘takes the slot’ of another potential character. So all you Waluigi advocates can sit down, for now, thank you.

This Fighters Pass isn’t it for DLC, as you may have guessed. I’m not sure what will make Sakurai stop adding fighters to his game, but regardless, we now know that Fighters Pass 2 is in development, and moreover he promises six characters this time.

So who is it going to be?

The two most popular picks would seem to be Dante from Devil May Cry, and Sora from Kingdom Hearts. I think Sora especially would fit right in with the style of Smash: Dante might look a bit out of place, but having said that we’ve also got Bayonetta and Solid Snake, so maybe that’s an invalid point. Crash Bandicoot also seems to be wished-for. The character I desperately want to see, however, is Phoenix Wright from the Ace Attorney series. This series was a cornerstone of the DS era, and it would be so fun to see how his moveset would work. The courtroom is an easy choice for a stage, too, with characters like Maya (of course), Mia, and Edgeworth in the background cheering him on, similar to the Garreg Mach Monastery stage. That would be incredible.

It’s exciting to think about who is coming next to Smash Ultimate. Even if it’s not any of the options I’ve mentioned above (which I personally think is pretty unlikely), it’s an opportunity to learn about a new character, series or game, to maybe find something you will later really enjoy. And I think that’s pretty great, don’t you?