Shovel Knight: Treasure Trove and the legacy of ‘Nintendo Hard’

Shovel Knight is not a game you play to relax.

It’s an old-school 2D platformer released in 2014 with a fairly simple story: you play as the eponymous Shovel Knight, who makes it his business to dig up treasure (using his signature weapon, the shovel, of course) and fight against an evil organisation, the Order of No Quarter. He’s also aiming to rescue his partner Shield Knight after she was possessed by a cursed amulet at the Tower of Fate, and therefore Shovel Knight journeys back to the Tower, fighting various members of the Order on his way, to save Shield Knight. (Treasure Trove is the expanded version of the base game, giving you two more campaigns on top of the original one to play through). 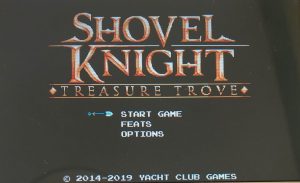 Shovel Knight has two main methods of defeating enemies – the Dig Slash, which involves striking enemies from the ‘front’ (or side, since this is a 2D game) with your shovel, and the Shovel Drop, which involves dropping down with the shovel blade pointed downwards to hit enemies on the head. You can also buy relics (or find them in stages, for a lower price) which have various functions to help you at the cost of magic points (for example, the Phase Locket makes you invincible, and the Chaos Orb bounces everywhere and hits enemies), and you can buy different armour, also with different properties – one allows you to perform a sort of charge attack after performing two Shovel Drops, one has no function other than being gold and flashy, and another halves the amount of gold you lose when you die.

Because Shovel Knight is pretty hard. It’s not unfair, it’s not poorly made – in fact, that couldn’t be further from the truth. It’s a fantastic game that is full of humour, excellent stage music, and allows for a fair amount of variety in how you choose to do combat, with the range of relics available. 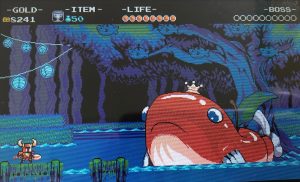 An example of this game’s great sense of humour: visiting the Troupple King (make sure you ask him to do his dance)

However, it is a game that can be frustrating, infuriating sometimes, because while it is not unfair in itself, it can feel unfair if you’re rushing (whether knowingly or unknowingly), not paying enough attention, not utilising a particular relic or mechanic, or you’re just plain unlucky at certain points. That being said, some sections – a lot of sections – are particularly difficult to navigate in and of themselves, and can take many attempts before you eventually get there. A particularly annoying section is found in the stage called the Lich Yard, where lightning flashes on and off, throwing everything into shadow with intervals of a few seconds (making it impossible to see enemies or even Shovel Knight himself if he goes past an obstacle), and at the same time forcing you to contend with a lot of difficult enemies. The stages also have a generous amount of bottomless pits, which can be a complete nightmare if you’re bad at timing your jumps.

On the other hand, though, the challenge Shovel Knight provides makes it such a rewarding experience when you finally do break through a particularly hard section. Admittedly, sometimes it can just be down to sheer luck, but a lot of the time it’s a result of playing the same section over and over until you become skilled enough to get through without dying. The emphasis on skill, on building up the ability to get through complicated and difficult sections, is the legacy of games that were considered ‘Nintendo Hard’ in earlier years of home console gaming.

‘Nintendo Hard’ games were usually platformers made for the Nintendo Entertainment System and had their hey-day in the second half of the 1980s. They were exceptionally challenging to the point of sometimes feeling impossible (and in some cases were just poorly-designed, so they were impossible), and many walked a fine line between being really difficult (but you get there eventually, through practice), and being unreasonable. Games in this category include the early Mega Man games, Castlevania, and Zelda II: The Adventure of Link. 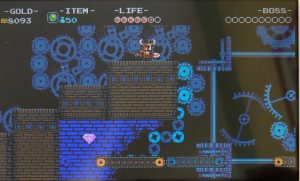 The Clockwork Tower, one of the stages in the game

Shovel Knight shares many similarities with this category of games, but it has a much fairer balance of being difficult but also being manageable. It’s also made in the 8-bit style, so it gives the distinct impression of being a game that might have been ‘Nintendo Hard’ if it wasn’t for the modern adjustments that make it fairer – for example, fairly frequent checkpoints. Although it can feel like a section is totally impossible, there’s usually a gameplay technique or mechanic that you’re not making full use of, or, worse, you’re frustrated because you failed before so you end up rushing, leading to more failure and eventually you become your own worst enemy.

But in itself, Shovel Knight is not as straight-up evil as many ‘Nintendo Hard’ games could be, so it reaches a fair compromise that I think is effective. There are some modern games that can absolutely and fairly be called ‘Nintendo Hard’ – for example, Cuphead, released in 2017, is famously difficult. Shovel Knight, while it shares elements of the ‘Nintendo Hard’ formula (mainly down to being heavily influenced by the developers’ experiences with NES games), is really difficult, but it’s not as bad as it could be.

Now if you’ll excuse me, I should go and practice. Shield Knight still needs rescuing and I keep falling down bottomless pits.