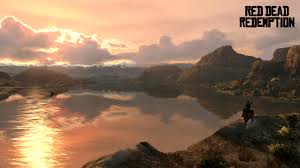 The desert has never looked this good.

John Marston steps off the battered wooden ferry to land on the bank of the Rio Grande. As he mounts a horse and begins to ride into the Mexican sunset, “Far Away” – a song written by Jose Gonzalez specifically for this moment – begins to play. In a game filled with bloody violence and brutal crimes, this is the highlight; and it sums up why I love Red Dead Redemption so much. This is a game which, besides offering endless bandit-killing entertainment, creates an utterly absorbing world through its detailed portrayal of the unforgiving American West in the early 20th century. This is what makes Rockstar Studios’ Wild West adventure a real masterpiece. By adding maximum detail to every aspect of the game, what has been created is a complete and totally convincing experience.

What sets Red Dead apart the most is the storytelling. You play as John Marston, an ex-bandit who has returned to the old lifestyle against his will. The US government, using Marston’s possible punishment for past crimes as blackmail, forces him to do their dirty work by bringing in – dead or alive, of course – several criminals that he worked with years ago. His old comrades are still active and dangerous, meaning that in order to track them down and eliminate them, Marston must repeat violent deeds that he had hoped to leave behind. It is a straightforward tale, but like any good western, broad themes such as violence, morality, and the decline of the Wild West give it depth. Our hero is a cynical old man, alienated from the rapidly changing modern lifestyle that killed the traditional West, giving him a wry sense of humour and interesting opinions on the dying world he sees around him. Marston is the best of a great cast of bizarre characters that make dialogue enjoyable throughout the lengthy game. Funnily enough, the most important theme is redemption: Marston hopes that he can lay his past to rest and finally live out his new life in peace. He often talks of the family that he has left behind on their farm, knowing that he will return when the bloody job at hand is finished.

The best word with which to describe Red Dead is “cinematic”. Its style constantly pays tribute to classic western movies. The barren landscape is perfect for the traditional setting in the deep south of America, and the soundtrack could be taken directly from Ennio Morricone’s work on the Clint Eastwood spaghetti westerns – except that it’s even better here. The activities available are also inspired by the Hollywood image. You can stroll through the double doors of a saloon and stumble back out, blind drunk, moments later. You can shoot the hat from a man’s head, shoot the gun from his hand, or just shoot him in the face in the tense duals against cowboys that challenge you. Of course, it’s all also just as gritty and bloody as the films have ever been. 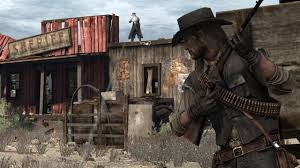 Expect to do a lot of shooting.

There are an incredible number of things to do in this game, ranging from hunting to cart-racing; horse-breaking to bounty-hunting; and vomiting to herb-picking. Despite its size, this is one of very few games in which I have reached 100% completion. The massive open world recreates the expansive nothingness of the desert, while still being packed with interesting content. It is filled with rundown farms and dodgy towns, and it even crosses the US-Mexican border. The true quality comes from the details, such as the singular herd of bison that permanently disappears after being hunted, in homage to the historical near-extinction of the animal. The gameplay is typical Rockstar fare, mainly consisting of pointing-and-shooting at bad guys. But the addition of the Dead Eye feature – which allows you to slow down time and pick off your enemies – maximises the potential for head-shots and makes the player feel like an unstoppable Western hero, especially when firing from horseback. Speaking of horses, the riding is impressively realistic without being dull and adds a lot to the experience.

There is even more to enjoy with the addition of the ingeniously ridiculous Undead Nightmare expansion, which inflicts a zombie apocalypse upon the land. This extra content is short and anticlimactic, but hugely fun while it lasts. The peak is undoubtedly acquiring a unicorn which spouts butterflies and leaves a rainbow trail, which is totally worth the hours of effort it takes to find the majestic steed.

There isn’t much more praise that I can shower upon Red Dead, but before this article reaches its end, the game’s end itself should be mentioned. I doubt that you have ever been brought to tears by a videogame – unless it was in laughter due to a particularly terrible moment of voice-acting in a lesser game. Tears of sadness are certainly not a common reaction for players, since many videogame plots are either too corny or too boring to hold our attention for long. Likewise, I have never cried while playing – but Red Dead brought me close to it. Its uniquely mature and original story reaches a true climax in its final moments. Perhaps I spoke too soon in overlooking the finale as the game’s highlight at the beginning of this article. Or perhaps it makes no difference, since both those moments are – like the entirety of Red Dead Redemption – pretty much perfect.