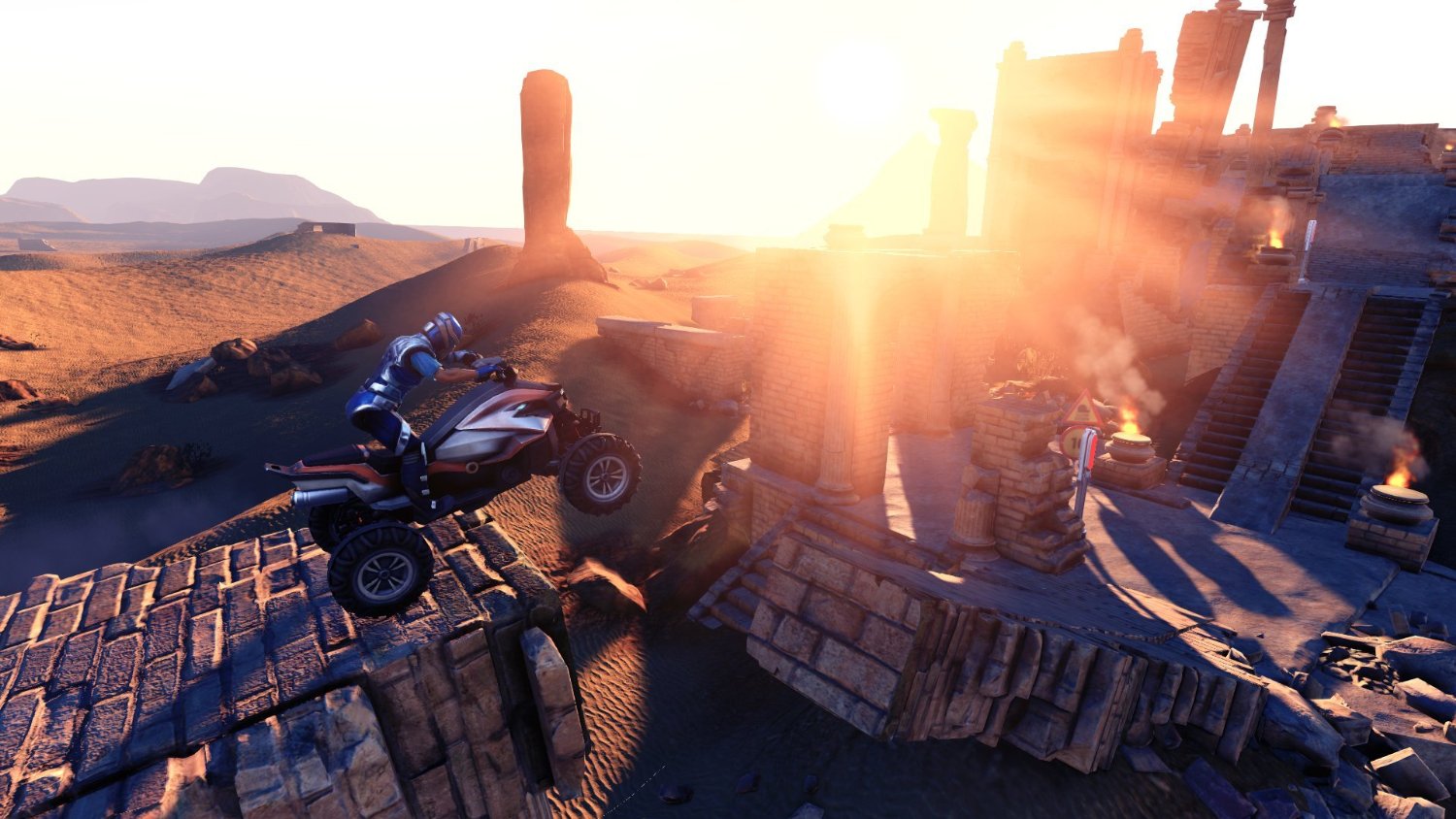 Fusion continues the series’ style with a choice of vehicles and detailed environment models.

Those familiar with about the Trials series, will no doubt be unsurprised at the giddiness and glee with which I anticipated this game. Trials Fusion does not, largely, disappoint. Readers familiar with my previous article will also be aware of the style of gameplay (the main allure of Trials) that is simplistic, challenging and rewarding. I am happy to report that this style remains completely intact, and is essentially the same beast with new tracks to try out, although there are still a number of changes from the previous games.

The first thing to note is that Red Lynx are showing obvious signs of the series’ success in this game. Ubisoft has their logo splashed about prominently, the game is linked to Uplay (as if that matters, it’s notorious for not working), the menu screens have had some serious jazzing up, and they’ve even splashed out on a bit of voice-over work. That said, the visuals in this game largely aren’t an improvement over Evolution, and the whole game has been given a futuristic setting, which is likely a bit divisive. Gameplay remains largely unchanged, which is actually a big plus for the game, players can still make and submit their own tracks (although at least on the 360, multiplayer has suffered a bit), and the riders, as well as bikes, can be customised, and this time customisation pieces are considerably more affordable. The primary selling point is the addition of tricks that the player can do whilst in the air.

There are quite a few tricks that can be done, some of them will be familiar to extreme sports fans. The tricks are dependent on the positioning and angle of the bike, as well as the directions imputed into the right analogue stick. It is a nice feature, adding an additional challenge to playing levels, plus helping the player show off, but it’s not without its issues. For one, most other extreme sports games that utilise trick systems have a directory with the commands needed to pull off each trick. This is not present in Fusion. There is one tutorial that randomly teaches you 4 tricks at a time, and there’s no guarantee it’ll teach you them all, meaning you will have to look up the controls on the internet for specific tricks, which are often needed for specific game modes and challenges. Only modes geared towards the tricks system (such as the new FMX skill games) actually bother to tell you what trick you are doing, and the input is quite twitchy, meaning that tricks will easily be repeated, and the scoring system is more dependent on holding tricks, rather than accompanying flips. Worst of all, whilst this does add a lot to the game, it’s also glitchy, meaning that a player may go off a jump and the rider will immediately do a trick you never intended to do, likely resulting in a fault. In a game where doing runs perfectly without faulting is paramount to success, this is a particularly large problem.

There are a few other changes. For one thing, Trials Fusion has a sort of plot going on throughout the levels. It’s reasonably predictable, and most of it is delivered by the two narrators, who also deliver a lot of comedic one-liners. The style of this narration will be familiar to any gamer who has experienced mad-cap arcade style racers and skill games, such as Hydro Thunder, Extreme-G, Rollcage and Wipeout. Like those games, there is also an ostensibly futuristic styling. This style at least appeals to me, as does the narration, because it feels like it is deliberately invoking old school arcade racer tropes, but to some it is definitely going to be a bit cheesy, and an odd shift in direction. The narration can be a bit distracting, and can get old very quickly, especially if you are redoing parts of a track because of faults. The voice acting is reasonably good, however, and some of the narration is quite funny. The male voice is also distinctly obvious as Maurice Lamarche, the voice of ‘The Brain’ (Pinky and the Brain), and ‘Calculon’ (Futurama). In all, the narration is a nice touch, but it lacks variety, in a game where lack of variety (with the amount of retrying you’ll be doing) becomes obvious very quickly.

The bikes are largely the same, although customisation has been somewhat improved. With new wheels styles and body kits, and not just colour customisation options. There is also the addition of a quad bike, which is currently limited to one series of tracks and skill games, and there currently isn’t much use for it, and there are no improved versions. This is likely something that could be expanded with DLC, but as it stands, it works largely like the other bikes, which isn’t really a problem, but it’s mostly an aesthetic, and it does remove a bit of choice, and the ability to try a new challenge with those tracks, as only the quad can be used, and so there’s no way to make life difficult for yourself by using the slowest bike, or the bicycle. This is not a horrendous issue (it’s only about 6 tracks out of quite a lot), but it can be seen as a bit of a gimmick, and an obvious DLC hook.

The primary gameplay is pretty much business as usual. This is very good news for fans of the series, and new players in general. The Trials series makes use of a very simple control system, 3 primary bikes (the easy to use but slow one, the moderately controllable one that has the highest top speed, and the ludicrous accelerator that is tough to master but the most responsive) and a set of levels with obstacles that must be overcome with skill and judgement. It is not an easy game, and it is a game that, in order to master, requires a large investment of time, effort and practice. You will fault an awful lot. You will get frustrated. You will inevitably give up on some things, and likely get irritated until you have overcome it, or given up entirely. It offers the same thrills that the previous installments have, and I firmly believe that some of the calls about it being easier than Evolution are largely exaggerated simply because veterans of the series have no real way of telling if it isn’t just that they’ve got so good at the games that it merely seems that way.

One area that has been expanded is challenges. Previous games had a few that were linked through achievements. Now there are 3 challenges for each track (aside of skill games) at any level of difficulty. Meaning that replay value of playing through tracks is greatly enhanced by the additional challenges, as well as the Easter Eggs, squirrel hunts and quests for Platinum medals. Like Evolution, you have to unlock the hardest tracks to get access to the platinum times (although if you’ve done any when they’re unlocked you’ll be instantly rewarded with them). The challenges are often fun, but many of them are, typically for Trials, insanely difficult, requiring of the player considerable skill, practice and patience.

Ultimately, Trials Fusion is a competent successor to Trials Evolution. Whilst it was always going to struggle to follow it, Fusion is still an excellent addition to the series that players new and old will love. Whilst it lacks a bit of polish, and could use a few updates to deal with the glitches, with the potential for four separate DLC packs to follow, Trials Fusion is a must for fans of arcade style gaming.