Part two of Cappi Lau’s Super Mario Party review. All screenshots and the featured image were taken by the author.

Like many others, I like the game a lot, but I feel as though there are places where the game can do much better.

If you’ve played Mario Party 6, 7 and 8, you’ll discover that each board has unique ways to obtain stars. In Mario Party 8, for example, apart from the board with classical rules, there are also boards that require racing to the end to get the star, walking through a maze (being unable to foresee what is ahead of you) to try and find the star, or playing a game of Monopoly to claim the hotels’ ownerships and nab other peoples’ stars. The possibilities were endless. 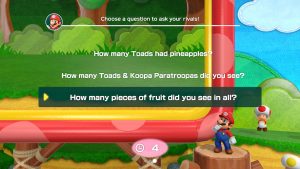 Choose the right question to confuse, if not take down, your (un)attentive opponents!

However, in this game, almost all the boards have the same rules, and the lack of variety of methods to obtain stars could be considered a backwards step.

Another thing worthy of discussion is board design. Boards in this game are quite small compared to other pre-DS Mario Party games. Sure, it’s not the 1-10 dice used previously, it’s 1-6, so it should be shorter within the same number of turns. However, I feel they went too short, because now you can cycle through the entire board within two or three turns. As a result, there are considerably fewer events that might obstruct your path as well.

The unlockable Kamek’s Tantalising Tower is a good example. It’s just a short walk to the star spurge space without much obstruction: there is only a chain-chomp that might chomp your coins. Contrast DK’s Stone Statue from Mario Party DS, which has a similar method of obtaining stars, but with barrels that can be triggered to squash everyone on the log and deduct 10 coins from each player, or spaces where Dry Bones can send you back to the start. That’s a huge difference in terms of difficulty level, as well as excitement.

What’s more, the stakes are lower. It’s much easier to get the right number of coins in this game, and harder to lose them. Coins are essential for buying tools, stars and services, but they’re all very cheap compared to previous instalments. For a start, the stars cost 10 coins instead of the normal 20, making buying stars so much easier. This is the case for some of the tools, coupled with the choices the game gives you at shops. The star pipe is just 10 coins from the store, and that just makes everyone want to buy that instead of buying the other tools, even though they are quite powerful as well. 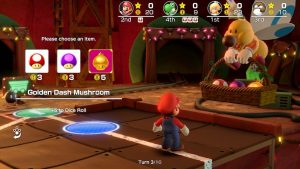 The choice is quite obvious, even in a normal shop

Besides, if you land on certain event spaces or a(n) (extra) Bad Luck space, you’re supposed to lose a lot of coins, say 10-20 each time. You might even have to donate 10 coins to every other player, like in the previous instalments, and you’re sure to feel frustration at this turn of events (every other player is of course very happy about your misfortune). However, in this instalment, Bad Luck spaces take away just 5-10 coins, and therefore the punishment is less severe.

The ally system is great, but on the flip side, it might just ruin your dice roll as well. Allies will always give you an extra 1-2 spaces forward, which is incompatible with the dice of certain characters, which are used specifically to land on certain spaces, or not to land on them. Shy Guy’s dice, for example, is used specifically to travel exactly 4 spaces forward, or maybe get a 0; but with the addition of an ally, using their dice block will allow you to travel 5 or 6 spaces forward, with a lesser chance of moving ahead 1 or 2. This not only makes you unable to land 4 spaces ahead of you, but it also increases uncertainty as to whether you will land on a certain space. As a result, this system is sometimes not as beneficial as it could be, because it can have a detrimental effect on the specific capability of another dice.

What about other game modes?

To me, the other game modes in Super Mario Party felt like “extra stuff”. Still, I can’t say they aren’t important to the game.

River Survival is a mode where you have to team up with 3 others to row a boat through various obstacles to the finish within the time limit. If you want to extend the time limit, you’ll have to play some team minigames. It demands even more teamwork than 2 vs 2 mode, and it might even be a test of your friendship. Though, to be honest, the limited number of minigames and the repetitive obstacles dampens the excitement soon. In order to “complete” the mode, you have to discover all the spots by taking different paths, so you might have to play it over and over again… 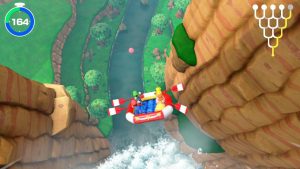 A waterfall in River Survival (scary)

I had a lot of fun with my friends in Sound Stage though, which involves playing minigames by following the beat. The minigames are great, yet still competitive, and spirits were high whilst playing these minigames, so I personally would have liked it if these games are added to the normal roulette when playing Party Mode.

Challenge Road is also pretty fun, asking you to finish a number of challenges in minigames, and it provides a way to test your skills. It feels like Test for the Best in MP8.

Super Mario Party is definitely fun. It brings back the joy of playing the older Mario Party games, but with some new touches. Still, the lack of content in areas and a few design flaws might cause boredom for some players, meaning it didn’t quite reach its full potential. I hope that in the next instalment, if Nintendo will flesh out the popular elements, and tweak the more misguided ones, Mario Party won’t lose its freshness.