Part one of Cappi Lau’s Super Mario Party review. All screenshots and the featured image were taken by the author.

Ah, yes, another game from the Mario Party series, known for either bringing joy to your group of friends, or abruptly ending your friendships. Having used some new styles of board-gaming since Mario Party 9, Super Mario Party finally returned to the style of the board games used in Mario Party DS and its preceding instalments, whilst adding new elements too. Let’s delve into the game.

Of course, what is Mario Party without its board game mode (called Party Mode in-game)? Party Mode is essentially the soul of the game, in conjunction with the 2-vs-2 version of this mode. The classic free-for-all mode requires that players roll a dice, with the number you roll representing the number of spaces you can move ahead on the board, in order to grab coins and purchase stars. The number of stars you have determines your position in each game. You can also use coins to buy items or services, which can harm your opponents’ chances, and benefit you. If you’re lucky enough, you may trigger events, which can affect the game in various ways. After a set number of turns, the one with the highest number of stars wins.

2-vs-2 is similar to the free-for-all mode, except there’s no limitations as to where you can travel, and you face off in teams of 2.

I had so much fun with my friends playing this mode, especially when they tried so hard to grab the star in front of them, only for it to be snatched away; or when we won the minigames after each round. Either way, their reactions are priceless (and this may sound mean, but really, who isn’t a little mean whilst playing this game?). 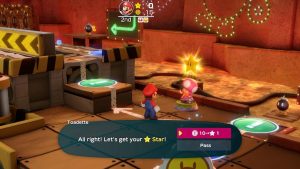 But this is also one of the reasons why the Mario Party series can be notorious for ruining your friendships. Sometimes, you might have a not-so-good teammate. It might be that you have more than forty coins during the last three turns, a star pipe, and you are close to the stars, but then your teammate absent-mindedly lands on a VS space, losing your team the bet and all the coins required to get the star! Imagine the frustration!

One of the features my friends and I liked the most is how unique every character is. At the start, every single character has a normal dice (numbered 1-6), and a character-specific dice. Each player chooses which dice they will roll at the start of their turn. Depending on the dice, players can move more spaces than the normal dice block allows, stay on the spot, or even gain or lose coins due to the roll. This allows for various strategies, depending on the player. Want to maintain a relatively balanced roll whilst hoping for an improved chance to move 3 spaces forward? You might want to use Mario. Want to rocket ahead by 8-10 spaces while taking the risk of losing 3 coins? You might want to opt for Bowser. Therefore, who you pick does affect gameplay now. 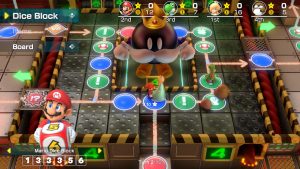 You might say, “It’s not fair, this guy’s got a better dice than mine!”, but let me just say, Mario Party’s never a fair game. It is the randomness that makes the game sometimes frustrating, yet fun. Also, how ‘good’ a dice is will depend on how you use it.

Another feature I like is the ally system. It grants you more options, and makes you more powerful overall. If you land on an ally space or get an ally phone, you can call 1 more character to aid your cause. You can use that character’s dice, giving you more options for your dice roll; each ally can also add 1-2 more spaces to your dice roll, meaning that the more characters you have on your side, the further you can travel (though this has drawbacks); and with 3 or more allies on board in total, players might get a chance to play ally minigames, which can give those with more allies a great advantage.

You have to admit, power usually comes in numbers. 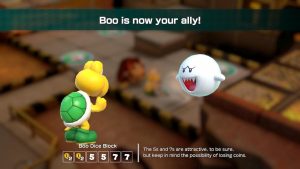 Gaining an ally (and to be honest, Boo has a pretty nice dice)

The game also utilized the Joy-Cons so well. The gyroscope is used in quite a number of minigames: for example, in simulating frying a dice beef, or in order to fit in block pieces by tilting the Joy-Con. The HD-rumble in the Joy-Cons was used extensively as well. A couple of minigames used HD-rumble to make you guess the size of a sea dragon, or who made the rumble. If you walk across a place with a hidden block, your Joy-Con rumbles a bit too! Nintendo clearly fitted so many features in the game around the console, and it is excellent to see. 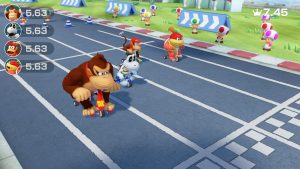 Part two is coming next week, with a final verdict on just how good Super Mario Party is.