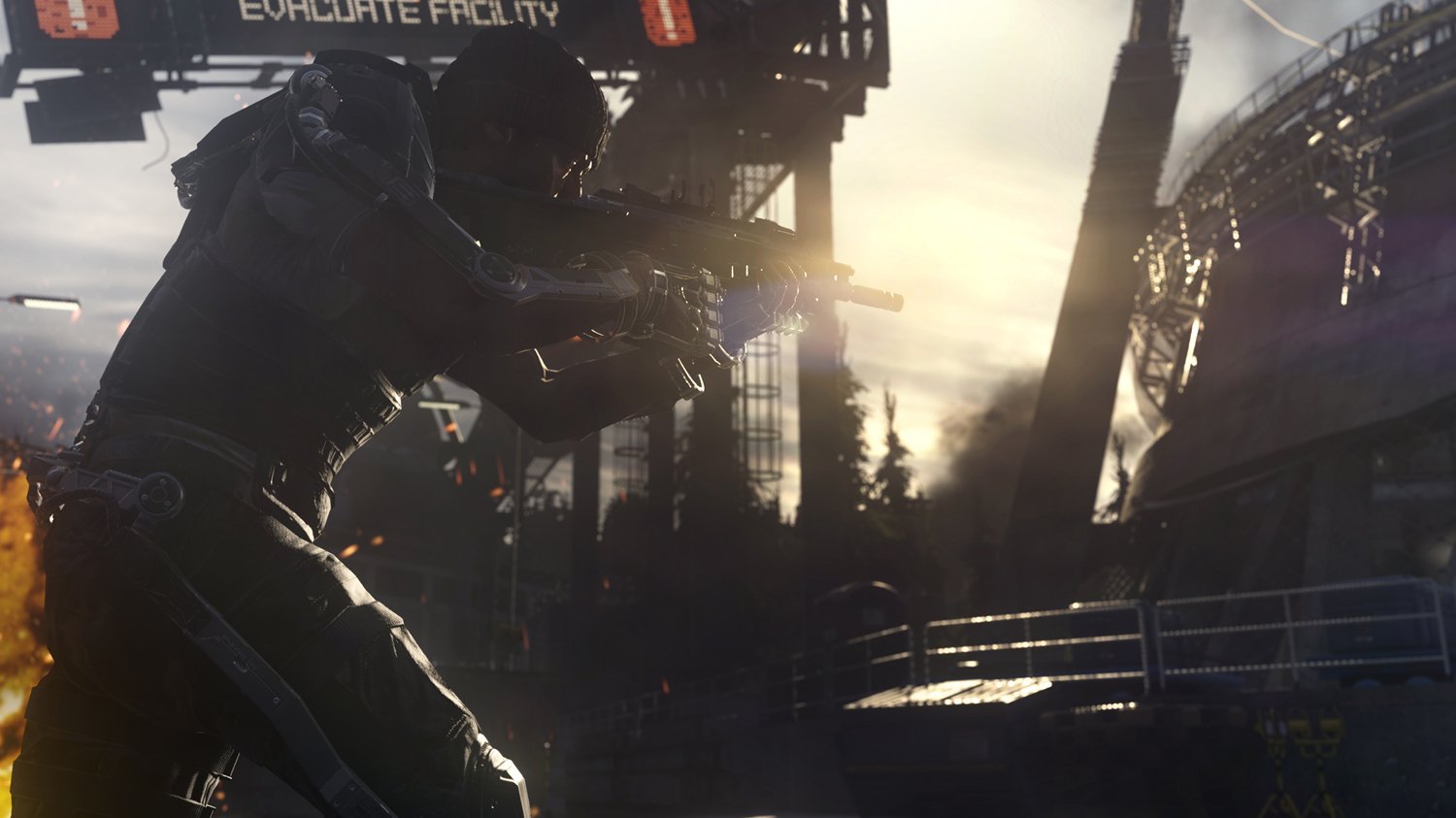 It’s that time of year again…

Since Black Ops released in 2010, I hadn’t enjoyed an entry in the Call of Duty series. I didn’t get into any of the campaigns, I barely touched online and couldn’t face investing into whatever co-operative mode was added. I am simplifying three games to just my very quick opinion, but my fundamental point is that for every entry between Modern Warfare and Black Ops my total game time varied between about one day to a week. But for the following three, my total game time remains just a few hours. I admit I still picked them up eventually (mainly for split-screen) but I couldn’t recommend them to anyone. As a result I’d given up on the series and paid no attention to Advanced Warfare’s pre-release. I only got it on a whim after getting DriveClub refunded and having more PSN credit then I knew what to do with.

Thankfully, Advanced Warfare is a genuinely good game. If you’ve never enjoyed a CoD game you won’t like this one, with the core mechanics remaining unchanged. However if you ever have, even if not recently, then this might just be worth a look. By setting the game 50 years in the future, Sledgehammer Games have taken this franchise forward for the first time in years.

As per usual, Advanced Warfare’s content is divided into three modes, with a single player campaign, competitive multiplayer and a co-operative survival mode. The campaign follows the military career of Jack Mitchell, voiced well by Troy Baker, as he moves from the marines to a PMC called ‘Atlas’. However it’s Kevin Spacey who steals the show as Jonathan Irons, CEO of Atlas. Playing a role not unlike Frank Underwood in House of Cards, Spacey is as captivating as ever. Unfortunately the studio didn’t motion capture Spacey’s face, so a subtleness to his performance is lost. The story is straight out of a generic action film and I doubt many will be caught out by the various twists and turns it takes, but the voice work and incredibly realistic CG cut-scenes are good enough to have kept me interested.

The majority of the 6 hour campaign is unfortunately but predictably composed of linear shooting galleries. Some minor tweaks do improve this otherwise tired set up though. By setting the game in the future, Sledgehammer are able to be slightly more adventurous in regards to the arsenal, providing an ‘Exo-Suit’. This allows you to boost up into the air, adding a new level of verticality. In specific sections it also provides a shield and a cloak, adding variety. However, the numerous fire-fights could have been mixed up by granting greater access to these buffs. The futuristic setting allows for greater enemy variety too through usage of attack drones and ASTs. Guns are also given a futuristic makeover, although through LED displays of ammo and fancy sights, rather than a difference in how they feel. This removes the need for a HUD during the campaign, increasing immersion. On the other hand, it’s disappointing that the weaponry could be replaced with World at War’s, set over 100 years earlier, and not be any more difficult. It does feel like a wasted opportunity to show some creativity. 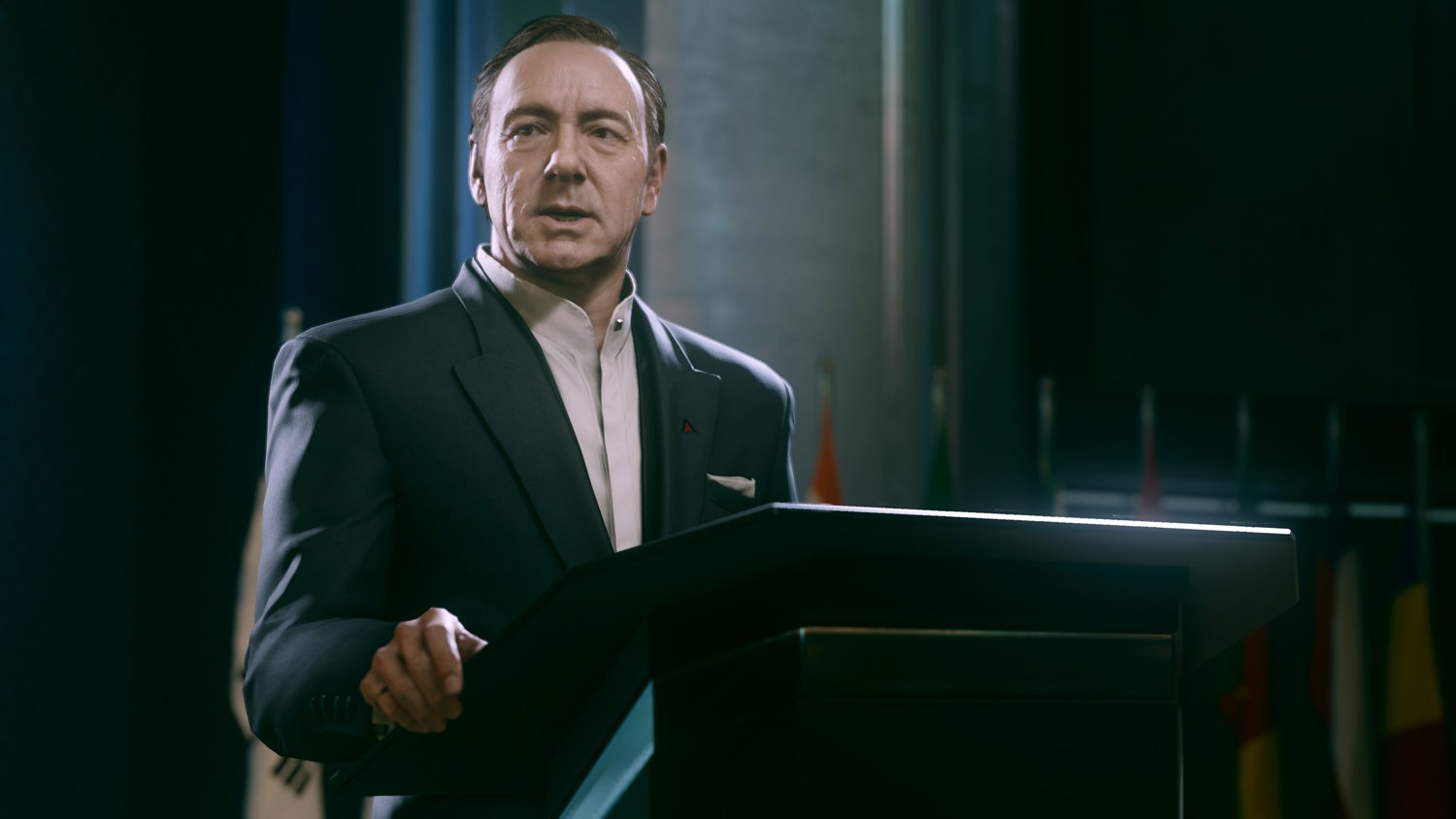 ‘Call of Duty: Advanced Warfare’, the unofficial Season 3 of ‘House of Cards’

It’s when the campaign takes a break from being a corridor shooter that it really shines. In one stealth section, you’re given an open playing field and a grappling hook and need to get from one side to the other undetected. This freedom of movement combined with consistent and fair AI, made this one of my favourite sections in any CoD campaign. Combined with levels that grant control of ASTs, tanks and hover-bikes, there are some surprisingly high peaks in the campaign. I’d love to see what Sledgehammer could come up with if they weren’t required to stick so closely to the corridor shooter core of Call of Duty campaigns. Ultimately though these sections, combined with the excellent voice work, make the campaign worth a playthrough, although at only 6 hours of content, not solely worth a £40 purchase.

Multiplayer has also grabbed me for the first time in years. There have been slight changes to loadouts: you can now select 13 items, be it a weapon, attachment, perk or kill streak. There are also some new modes, but ‘Team Deathmatch’, ‘Domination’ and ‘Free for All’ remain the ones I’m drawn to. Instead the main change comes from the Exo-Suit and the added height that they bring. Movement is more fluid then other games in the series, and the extra verticality requires a greater awareness of surroundings then ever before. The Exo-Suits provides other buffs, including those scattered throughout the campaign, although these aren’t particularly useful- cloaked enemies are pretty easy to spot and you cannot use a gun whilst shielded.

To have any sort of lasting appeal, an online shooter needs well designed maps and a balance amongst weapons. And these two things Advanced Warfare gets absolutely right. Maps vary in size and structure, but from the hours I’ve put in so far, I can’t find any that I don’t enjoy playing on. Just as importantly, melee attacks no longer hold any kind of edge to guns. The long range stab has finally been replaced by a much shorter range mechanical punch. Gone are knives acting as a genuine alternative to guns, but instead melee attacks are rightfully a last resort. This greater sense of balance is carried over to firearms too. I’ve found more of a difference between submachine guns and assault rifles then before, requiring me to change my game accordingly. With assault rifles I take a slower, more cautious approach whereas I find submachine guns best suited to moving recklessly towards any signs of enemies. Quick-scoping also seems to have been removed, with sniper rifles now needing to be used like actual snipers. 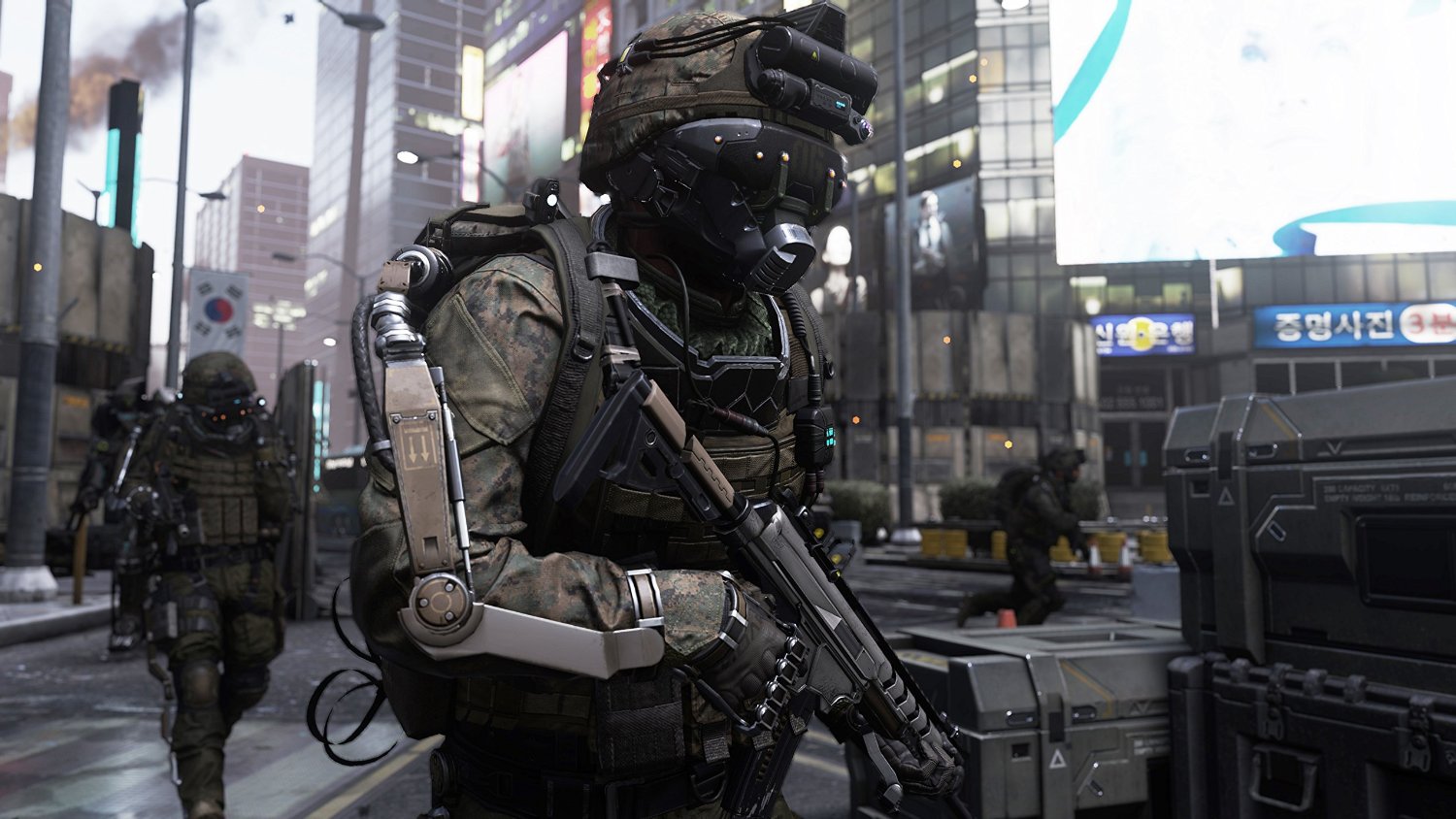 Those Exo-suits may not look like much, but they certainly provide a lot in terms of gameplay variety.

It’s still not perfect by any means though. You will occasionally get killed straight after respawning. There remains a small but annoying contingent of players willing to wait in a corner all game for an opportunity to get an easy kill. In any given team based mode, most players seem more interested in having another team deathmatch than trying to complete any objective, though admittedly there is nothing that the developer can do to stop the last two. However, for the first time since Black Ops, after each match there is that addicting urge to play one more.

Unfortunately, following Ghosts’ poor example, local play is limited to two players. Despite being on more powerful hardware, the option to have four players shooting each other on the same system is gone. The fact that if I want to play a shooter with three other people I have to turn on my PS3 to play an early entry in the series is frustrating.

I also can’t really recommend ‘Exo-Survival’, this year’s ‘horde mode‘. It’s by no means without merit- In my first ever game in this mode, there was a thrilling round where my entire team had died, leaving me against two ASTs, several automated turrets and a fair few soldiers. Through desperately grabbing whatever supplies I could find, careful use of my own turrets, and a lot of luck, I managed to survive. This was great. However these moments are outweighed by otherwise straightforward and repetitive rounds. It’s a generous addition- there are a total of 13 maps to play on- and would be fun with friends, but I can’t imagine regularly joining online lobbies for it.

Despite these shortcomings, Advanced Warfare is the best of the CoD franchise so far. Kevin Spacey’s performance and a few stand-out segments make the campaign worth playing. I cannot deny the addicting appeal to play just one more game online and whilst Exo-Survival isn’t the best co-operative mode, it is at least a generous offering of extra content. For the first time since 2010, I can heartily recommend this year’s Call of Duty.