All screenshots, including the featured image, were taken by me. Contains spoilers for the Beyond Light story and for the Deep Stone Crypt raid.

I’ve been playing a lot of Destiny 2 lately. Like, a lot. And one integral part of my enjoyment of this game has to be the variety of environments open for exploration.

Of course, since November there have been fewer places to see. The most recent expansion, Beyond Light, launched then, but it also brought with it the ‘Destiny Content Vault’. Several planets were overcome by Darkness and became inaccessible, along with their associated activities and quests. Several raids and strikes were put into the Vault, too. (There’s also the sunsetting of weapons and armour, or ‘capping’ them at the base power level, which is currently 1050 — but let’s not open that particular can of worms right now).

Vaulting is not a permanent thing, so we’ll see locations like Titan, Io, and Mercury again in the future. For now, though, they’re gone: but the vaulting of content also allows for new stuff to be brought in. This will probably involve reworked versions of old locations, as well as entirely new places. Beyond Light introduced Europa, the icy moon of Jupiter, where nearly all of the expansion’s story and post-story activities take place. Each Destiny 2 expansion brings a new raid (complex six-player activities involving puzzles, cooperation, and several difficult boss encounters), and so the Beyond Light raid, known as the Deep Stone Crypt, takes place both above and on Europa. 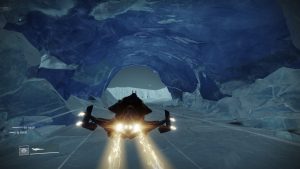 And now, we’re at the core of what I wanted to discuss. Europa is a beautiful place, and it’s clear that a lot of effort has been put into capturing Europa’s balance between beauty and isolation, as well as a mix of the manmade and the natural (and a convergence between the two).

Though quests and bounties send you far and wide across Europa (and therefore they force exploration), I’ve been most struck by this place during the times when I haven’t been working towards any particular objective. Finding something new and hearing the patrol music come in at the same time creates something really special. So on that note, I’ll talk about a few standout locations on Europa first, before moving onto a brief discussion of the Deep Stone Crypt. 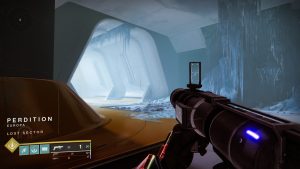 Lost Sectors are really interesting locations because, well, they’re lost — you have a marker on the map but they’re usually really hard to find, either underground or hidden away, and usually consist of a small series of caves or rooms, depending on the location. Lost Sectors are full of enemies (this one is full of a robot species called Vex), have a minor boss fight at the end, and then you get a chest of loot. 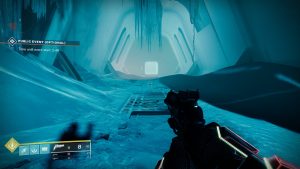 I like Perdition because to get to it, you go through an icy, crystalline tunnel and then suddenly you find this abandoned lab, with equipment that still seems functional, overrun with Vex — it captures the combination of the manmade and the natural found all over Europa. After clearing this Lost Sector on one occasion and standing still for a moment, one of the songs that can play whilst patrolling, ‘Frigid Tomb’, started to play. It created such a sense of tranquility, and solidified this Lost Sector as one of my favourites.

Of course I have to talk about this place. Clovis Bray I created the Exos: robots with the consciousnesses of real humans transplanted into them. Exos are extremely prevalent in the Destiny universe, being one of the three species you can choose when creating a Guardian (the other choices being human and Awoken), but their creation involved some horrible things (like the consequences of DER, or Exos not being able to cope with not being in their human bodies). Bray himself tampered with his son’s genetics, leading to his son’s death and forcing the need for Elisabeth, his granddaughter, to upload herself into an Exo body to escape the same fatal genetic condition. It is unbelievably disturbing. 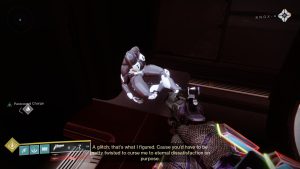 Dialogue from a dead Exo

After learning all that, it’s hard to find Bray Exoscience beautiful in any way. But it is undoubtedly a remarkable place, and what’s more, it’s massive. There’s a variety of different environments — from underground server rooms to a huge factory-like room with ledges you have to jump across — and mysteriously named locations within the facility, like ‘Creation’ and ‘Eternity’. 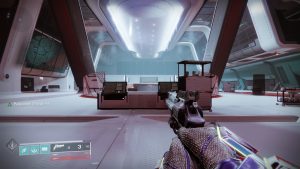 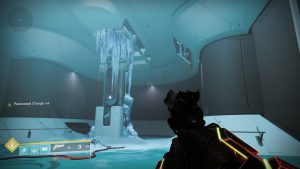 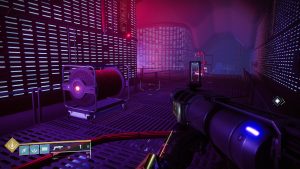 Deep within ‘Creation’ you will find a giant Exo head, containing the consciousness of Clovis Bray I. He’s just as nasty as you’d expect him to be, but you have to speak to him as part of the quest to get an incredible sword, The Lament. This place is one of the most interesting locations I’ve encountered in the game so far, and, like with many things in Destiny 2, knowing the lore surrounding it enhances the experience. 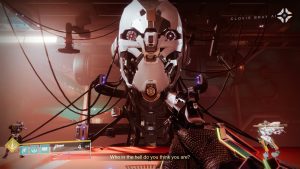 And finally, I wanted to discuss the location where this raid takes place. The Morning Star is a space station above Europa, linked to Bray Exoscience. It’s explored over the course of the raid, and is pretty fascinating in and of itself — but the main thing I wanted to discuss was the spacewalk. After defeating Atraks-1, Fallen Exo (a particularly stressful and mechanic-heavy encounter), your team emerges outside the space station and must navigate around the outside of it. It is a jumping puzzle, something very familiar to any Destiny player (and potentially a great source of annoyance, if like me you’re still getting the hang of jumping). Everything sounds muffled, including your team’s shots and the attacks of the enemy Shanks trying to pick you off, except for two things: the Crypt AI, which is activated as soon as you begin the spacewalk, and an incredible piece of music called Deep Stone Lullaby. On my first attempt at the raid, I was a bit too preoccupied with not falling into the abyss to really enjoy the spacewalk as much as I should have, but I vividly remember the moment we all stepped outside and the Crypt AI started its angry monologue, and I’ve listened to Deep Stone Lullaby many times since that first run (I’m listening to it as I write this). Screenshots can’t really capture the cumulative experience of seeing Europa from space, hearing the Crypt AI, and the gradual build-up of the music. It really is something you need to experience for yourself, but regardless, I strongly encourage you to find gameplay of this section online. Bungie really pulled it out of the bag with this one.

Are there any locations in games you want to write about? Email us at gaming@thebubble.org.uk!