All images, including the featured image, were taken by the author.

It’s really hard to describe just how much I love 2018 platformer Celeste. It’s almost punishingly difficult at parts (I racked up over 1000 deaths just getting through the third level), but I rushed through it in a matter of days.

If you’re even vaguely familiar with indie games, you’ll know about Celeste, which was even nominated for Game of the Year in 2018 (against titles like Red Dead Redemption II and Marvel’s Spider-Man). In this pixel art platformer the player takes the role of Madeline, a young woman trying to climb the titular mountain while struggling with her own mental health issues, which the mountain’s supernatural powers manifest in a dark doppelganger referred to as Badeline. 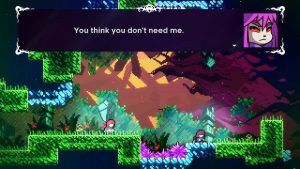 In the previous level, Madeline has confronted Badeline and rejected her, only to be thrown down to the bottom of the mountain again. In a game as tough as Celeste, where every inch of progress up to this point has been won through blood, sweat and tears, this is devastating. And for anyone struggling with similar issues to Madeline – anxiety, depression, loneliness – it’s a powerful point in the story. Madeline was defeated by her illness. 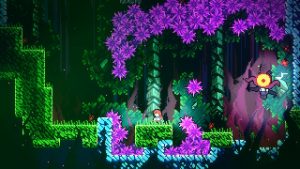 There’s a lot to love about this level in terms of design. A lot of Celeste is pretty, but this cavern is simply gorgeous, with emerald green grass, purple crystals, underground lakes and bright backgrounds, and a new golden feather item that turns you into a free-flying bubble of light. But what makes Rock Bottom so memorable is its role as a turning point in Madeline’s story, as she comes to realize that Badeline is not only an integral part of her, but her lashing out is a result of fear rather than malice. This leads to the only boss battle of the game, although “battle” is perhaps the wrong word. As Madeline you must chase your other half through the level, avoiding both hazards the attacks she throws at you. It’s fast-paced, frantic platforming that requires split-second timing, accompanied by a stellar soundtrack that combines the game’s synth tones with vocal harmonies. And it ends with Madeline embracing her other half, accepting that her mental illness is a part of her that cannot be ignored or rejected, and that in order to achieve her goals she needs to love every part of herself. 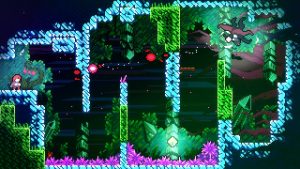 The final level is a triumphant trek through every area thus far to reach the summit, but it’s at Rock Bottom where Celeste‘s exploration of mental health shines. Madeline’s lowest point is not her end, and her mental illness does not make her weak. Reaching the summit would not feel like such an achievement without this turning point before it.

Just like depression or anxiety, Celeste is a tough uphill battle, but it is ultimately a tale of self-acceptance that is all the more powerful because of the medium of gaming. It is one thing to watch a character go through this journey, and quite another to struggle every step of the way with them. In particular, the game’s very forgiving respawn system encourages you to keep trying, again and again, getting a little closer each time and with every little victory counting. Rock Bottom is the cathartic, tough-as-nails lynchpin that Celeste revolves around, and I cannot recommend the game enough. 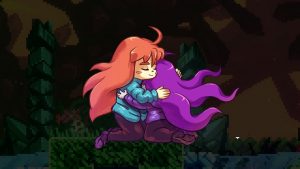 Are there any locations in games you want to write about? Email us at gaming@thebubble.org.uk!