Contains minor spoilers for the beginning of Persona 4 Golden.

I’m a bit late to the party, given that the PC port of Persona 4 Golden released in mid-June last year, but the winter sale on Steam was a great time to pick up games I wasn’t desperate to get but still wanted in my library. And since I bought my PS Vita back in 2019 just to play P4G, well, I needed a bit of time to justify buying the game again.

But this is a great port, well worth the second purchase. The only thing I’m wondering is why they didn’t port it sooner. 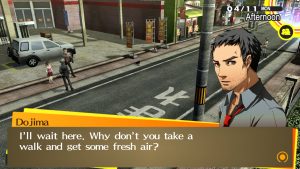 The PS Vita failed in the West for numerous reasons, and one of those was a lack of support both from Sony and third-party developers. It wasn’t a bad console by any stretch (despite the expensive proprietary memory cards), but it struggled throughout its life and is now remembered as Sony’s last foray into the handheld market, probably forever.

Despite all of this, though, P4G was one of the Vita’s killer apps. As an enhanced port of the extremely popular Persona 4 on the PlayStation 2, it had to be. It’s widely regarded as the definitive version of the game, and what’s more, it was a bigger game, even fuller than the original, but with the added boon of being portable. This is in contrast to Persona 3 Portable, the version of Persona 3 made for the PlayStation Portable that stripped back a lot from the original PS2 release. P4G started development as another PSP title, but development shifted to its successor, the Vita, once they realised it would be far more capable of capturing the original game.

P4G was very successful, creating a rather large uptick in the amount of Vitas sold upon its Japanese release in June 2012, but unfortunately never escaped the Vita – until June 2020, of course. 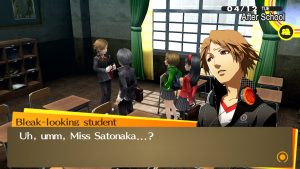 It’s genuinely a mystery – fitting for a game about a series of mysterious disappearances – as to why P4G was a Vita exclusive for such a long time. It never made an appearance on the PS3, or the PS4 when that system launched a few years after the game released. In many ways it ended up being one of ATLUS’s biggest games for several years and somehow forgotten too: it received spin-offs for home consoles (Persona 4 Arena and its sequel released in arcades and for PS3 and Xbox 360, and the excellent rhythm game Persona 4: Dancing All Night received a PS4 port in a bundle with its sequels), and yet the game itself remained trapped.

And when it finally got a PC port, obviously everyone bought it. It was such a success that Sega have said they’re going to port more games over, so this will not be the last classic Sega or ATLUS title we see. P4G, though, probably made the jump for a number of reasons: the aforementioned exclusivity; it is beloved amongst fans; and obviously, the climate meant (and still means) people had the time to sink hours and hours into an immersive JRPG. 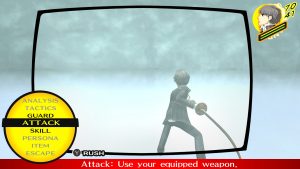 Combat in the game

So, Persona 4 Golden is about a high school student who moves to a quiet countryside town, Inaba, from the city. Almost as soon as he arrives, someone is murdered, and the protagonist and his new found friends end up forming a team to investigate a chain of disappearances. There’s also the Midnight Channel, or the rumour that if you look into a TV at midnight on a rainy night, you’ll see your soulmate. This is not the case: instead, the people you see on the Midnight Channel are in fact trapped in the TV world, and the Investigation Team discover the ability to go inside TVs, use their manifestations of their inner selves (their Personas) to fight enemies called shadows, and discover who it is pushing people into TVs. Of course, that’s the short version: the game takes about three hours to actually settle into the story. Despite the slow start, at least there’s plenty of eye candy to admire while the story gets going. The character portraits look incredible. And while this is obviously an older game, the new HD polish means you can see all of the character models, the buildings and the environments in crystal clear detail. Of course it’s aged quite a bit – the models look somewhat odd by today’s standards, and some of the textures are, uh, questionable – but it’s incredible to see everything so sharp and crisp now. The game genuinely feels refreshed: it’s the same game, it clearly looks its age, but it’s got a newness that demonstrates this game is never going to be obsolete. 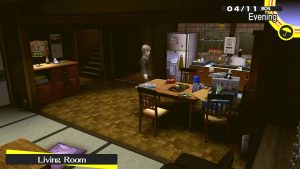 In fact, there’s not much about this port that’s different from the original P4G, apart from a few pretty neat extra features, like being able to choose Japanese voice acting over English (though I really like the English voice cast). The story’s identical: there’s no character additions like with the original P4 to P4G, the text and textboxes are just like they were on the Vita, and the fantastic soundtrack remains the same (as do the anime cutscenes). Of course, it was designed with gamepads in mind so you’ll probably have a better time using one, but you can get by with a mouse and a keyboard. 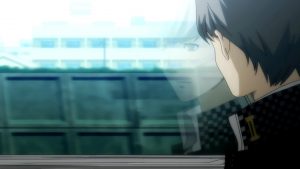 The best thing about this port is how accessible it is. P4G has gone from being the most inaccessible Persona game to the most, because this game does not require a particularly powerful PC to run it. It’s a great entry point into the series, and well worth the money (sale or no sale) for the dozens of hours of gameplay you’re going to get out of it.

This port’s popularity has sent a clear message to ATLUS and Sega: more ports, please! And if these future ports are as well-made as this one, crafted with as much attention to detail and care, then we’re in for a treat.