The featured image and all screenshots were taken by me.

Katamari Damacy is a game where you play as a tiny Prince rolling up any thing that will stick to your Katamari, a kind of huge spherical magnet. You do this in order to repopulate the sky with stars on the orders of your dad (who is also the King of All Cosmos, so, you know, no pressure), who accidentally (though completely unapologetically) managed to smash up every single star. 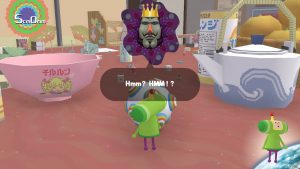 Your dad (who is not only the King but a bit of an egotistical nightmare) tells you to create new stars to replace the stars he destroyed. Every level has you create a star by rolling things up under a time limit, and as the levels progress, the expected size of the star increases. The bigger the Katamari grows, the more the Prince struggles with it, and the harder it gets to control. Once you reach the goal, you keep going until you run out of time, and voila! You have created a new star. Your dad places the star in the sky and you return to Home Planet, and from there you can complete the next level. 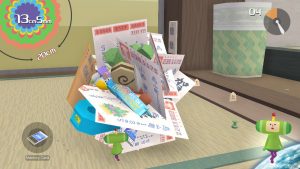 A typical collection of items

And that is the plot and gameplay of Katamari Damacy, at least as far as I can tell. It’s clearly ridiculous, preposterous even, and it’s saturated with bright colours and upbeat music, and some pretty funny dialogue from the King of All Cosmos. 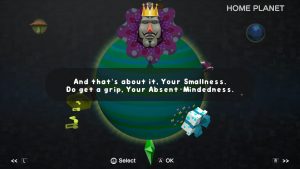 He is quite frankly really mean to the tiny Prince.

I think, so far, this game is one of the best I’ve played in recent times purely because it’s so different. I downloaded the demo of Katamari Damacy Reroll (the HD port of the original game for PlayStation 2) on the Switch and I subsequently bought the full game for a really reasonable price. If I didn’t have endless amounts of essays to write (tis the season, after all) I’d be playing it constantly. At the moment, I’ve played the first four levels.

However, I must say that the controls initially confused me. I tried the demo a few times – the first time around, I couldn’t get the control scheme down at all because the demo skips the part where it tells you how it works. It turns out you have to use both analog sticks to steer the Katamari – the left stick is for the Prince’s left hand, and the right stick for his right hand.

Now, it sounds easy, and believe me I felt stupid when I figured it out. But most games have one stick controlling movement and the other controlling the camera, so I just assumed it was the same for this game too. That isn’t to say this game is unintuitive to control – in the full version, you get a complete tutorial with even more actions you can perform, such as quickly changing the direction you are rolling the Katamari in, and it couldn’t be easier once you remember which input does what. 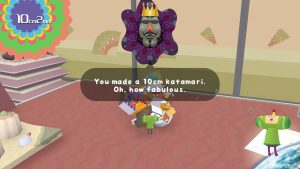 As I said earlier, the Katamari gets more difficult to control as it increases in size, but that is not a criticism. You genuinely do end up feeling like you’re in the tiny shoes of the Prince, who even at the beginning of each level is about as big as the Katamari itself. It can get difficult to manoeuvre the Katamari out of tight spots, and on a few occasions I’ve gotten it completely stuck, which can be frustrating. But when you manage to get unstuck, even if you do end up bashing into something and losing a millimetre or two off the Katamari’s size, it’s really rewarding.

And the things you end up rolling up! Every level takes place in a specific environment, such as inside the house, and you pick up objects that are suited to that space (mostly). For example, inside the house you pick up objects such as sweets, pencils, and playing cards. Rolling up objects like pencils is particularly funny and/or frustrating, because it makes the Katamari particularly unwieldy. You can even roll up animals if they are smaller than the Katamari, the easiest so far probably being butterflies, but I always feel a bit weird about doing that (even though it’s obvious you’re not harming them in any way). The King of All Cosmos does encourage you to roll up everything, but I’m not convinced his advice should always be listened to. Especially since he’s irresponsible enough to buy you presents and then somehow DROP them so they land on Earth, and YOU have to go and get them yourself. Probably not ‘Father of the Year’ to be honest.

Given the relatively early stage I am at in the game, that is probably all I can say on it so far. However, I can’t see my opinion changing much. This is a simple (though sometimes deceptively tricky) and whimsical game that is a lot of fun. Try the demo if you like the sound of it, but I’d be surprised if you’re not grabbed by the silly, bright, ridiculous world of Katamari rolling. 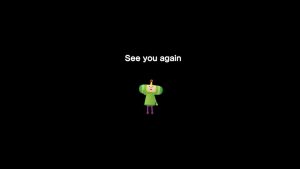 The cutest avatar ever