Warning: obviously, this contains spoilers for Super Mario Odyssey.
All screenshots and the featured image were taken by me.

As sure as the sun will rise, Peach will get kidnapped in a Mario game.

I suppose the Toad species, the residents of the Mushroom Kingdom, are collectively just really bad at security or something because a week doesn’t seem to pass without something happening to their princess. Despite the shocking frequency of these kidnappings, whether it’s in 2D or 3D, Mario is always on hand to rescue her, sometimes with the help of a companion, sometimes alone. The final boss fight is usually some variation on jump on Bowser’s head, retrieve Peach, ending cutscene, credits roll.

Super Mario Odyssey is no exception to this. At the core of this wonderfully inventive, secret-packed, visually beautiful game is exactly the same premise as basically every other Mario game, and that’s not a criticism. The reason why I’m pointing this out is that the ending seems to deviate from the formula a bit, both for good and for ill. 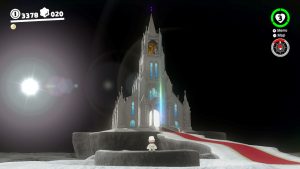 The church on the Moon, where the wedding was going to take place

So, right at the end of the game, after you’ve escaped Honeylune Ridge (in a fantastic sequence where you possess Bowser, using Cappy, just as you have done with many other creatures throughout the game, such as Goombas and frogs), Mario, Peach, Bowser (who is unconscious), Cappy and Tiara land on the surface of the Moon. Cappy and Tiara reunite and Mario approaches Peach – and everyone wonders, is this the moment?! Will their feelings towards one another, their relationship that has been weirdly ambiguous for as many years as Mario’s been rescuing Peach, finally be clarified?!

No. Because Bowser wakes up and unceremoniously boots Mario out of the way to offer Peach a bouquet of tiny Piranha Plants. Mario bounces back up and pulls the same stunt by offering a flower to Peach himself, and Mario and Bowser end up in some sort of competition, shoving the flowers in Peach’s face.

Uh, Mario? What are you doing? Is he really vying for Peach’s affections like this? Peach is overwhelmed by this display of extraordinary stupidity and tells them both ‘enough!’, and really, I’m not even slightly surprised at this. Just imagine being her for a moment: getting kidnapped yet again, getting taken to the Moon, nearly being forced to marry Bowser, and then when you’re finally rescued, the person who has risked his life to do so is now acting like a complete idiot. 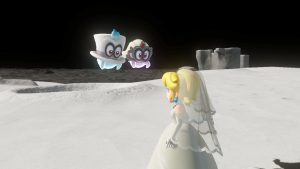 Peach with Cappy and Tiara

I honestly thought this was quite good: Peach seems to be showing some kind of agency for once (if we don’t count the singular game where she’s the protagonist, Super Princess Peach for the DS), and this is what I mean by the story deviating from the formula in a good way. Her story, minimal though it may be, does not end with being rescued by Mario. She invites Cappy and Tiara to come with her and walks over to Mario and Cappy’s ship, the Odyssey, in order to board it and leave the Moon for good, with Mario and Bowser left behind. Mario is patting Bowser’s shell by way of comfort and looking very forlorn himself. I know this is played for laughs and it is a really funny scene, mostly because it’s so absurd seeing Mario and Bowser united for once, but when you stop to think about the implications it’s a bit sinister. This is what I mean by the ending changing up the formula in a bad way, because Mario has somehow put all his many differences with Bowser aside (including the fact that, you know, Bowser won’t stop trying to kidnap people) and is sympathising with him, just because Peach didn’t want to marry either of them.

I mean, OK? I expected a bit more from Mario. I expected Bowser not to respect Peach’s decisions and autonomy, but for Mario to do the same is a bit disconcerting. It kind of just gives the impression that Peach is an object for them to fight over, but at least Peach doesn’t accept this.  Regardless, she gets over the whole thing pretty quickly because as the Odyssey is taking off, she gives Mario the OK and he jumps up, with Cappy, to board the ship, leaving Bowser on the Moon. And then, the credits. 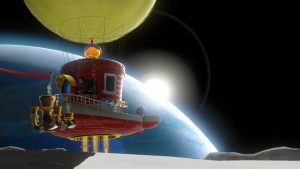 The Odyssey leaving the Moon, without Mario and Bowser

Post-credits you get to visit the Mushroom Kingdom, which is a lot of fun and probably my second favourite kingdom (after New Donk City) in the game. It turns out, however, that Peach is missing once again (oh no) but it then transpires that she’s travelling all over the different kingdoms with Tiara (hooray) – if you find her in a kingdom, she says a few lines and gives you a Power Moon. I liked this too, mainly because I probably can’t think of anyone who deserves a holiday more than Peach does after the events of this game (plus her array of outfits is incredible).

Seeing Peach acting for herself and making her own decisions is great. It really makes me want an Odyssey-style game where Peach is the protagonist – a 3D Mario-style sequel to Super Princess Peach, I suppose. BUT, seeing Mario behave as he does just makes me feel uncomfortable, albeit briefly. I could be taking this too seriously, and I am probably reading into this way too much, but I think this game completely alters Mario’s characterisation right at the end and it just doesn’t sit right.

We can only hope that with Peach’s decision to take a holiday, Bowser’s given up on his kidnapping tendencies for now. Something tells me, however, that that isn’t likely.