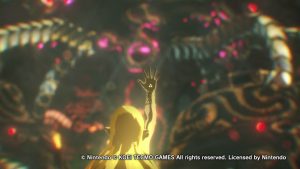 Contains spoilers for The Legend of Zelda: Breath of the Wild and (of course) the demo version of Hyrule Warriors: Age of Calamity.

All images, including the feature image, were taken by me.

I left it until Tuesday to pick up the Hyrule Warriors: Age of Calamity demo on the Nintendo Switch eShop. Given that the game is releasing tomorrow and the demo has been out for several weeks, I’m not sure why I didn’t do it sooner, but there was no way I could ever resist a return to Breath of the Wild’s Hyrule, and so, I’ve preordered it.

This game is a spinoff from the hack and slash Dynasty Warriors series, developed by Omega Force and published by Koei. There’s waves upon waves of enemies and you have to defeat them — that, really, is it. Other spinoffs, using characters and other elements from these franchises, include Fire Emblem Warriors; Persona 5 Scramble; and Age of Calamity’s predecessor, the original Hyrule Warriors. 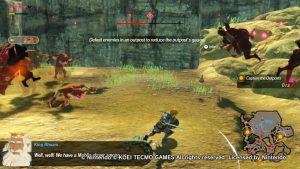 All are on Switch, and I think it’s the perfect platform for these kinds of games: they lend themselves very well to being picked up, played in short bursts, and then put down to do something else (not that anyone’s really taking their Switch out and about with them currently, but still…).

The first Hyrule Warriors is a separate entity: it isn’t meant to fit into the Zelda timeline, which is probably just as well, because the timeline is complicated enough as it is. Age of Calamity, however, is a direct prequel to Breath of the Wild. We get to see the world before the titular Calamity, as well as younger versions of important characters from BoTW (like Impa, who we only saw as a wizened old lady before). 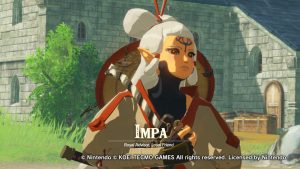 This is really interesting to me, because Nintendo is using a spinoff title that hasn’t even got ‘The Legend of Zelda’ in the name to tell the full story of BoTW’s main events. E3 2019 showed us a sequel trailer, but we don’t know a whole lot. But a prequel? There’s the DLC that was released back in December 2017, The Champions’ Ballad, and that gives a little bit to the events before the Calamity, but the story stuff is in cutscenes. It’s pretty fascinating to have a whole game set 100 years before, even if it’s a spinoff that restricts your exploration to the various stages where the action takes place. 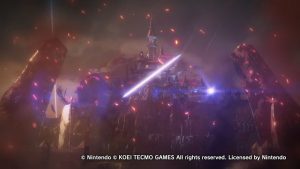 So the demo opens in the midst of the Calamity. Hyrule Castle is crawling with Guardians, everything’s on fire, and it’s going terribly, thanks. We see a box fall off the shelf in Zelda’s study in the Castle, and the bright light that emanates from Princess Zelda’s awakening of her sealing magic also awakens something inside the box: a tiny egg-shaped Guardian! It opens some sort of portal and jumps into it, narrowly escaping being annihilated by a proper Guardian — 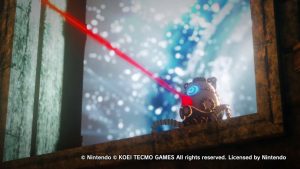 — and suddenly we’re 100 years in the past. King Rhoam (‘defier of prophecy’) is addressing a group of soldiers, including our beloved Link, because hordes of Bokoblins have descended upon Hyrule Field. 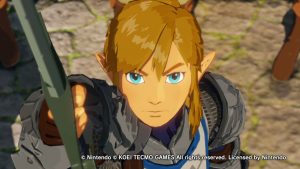 Then the gameplay, or rather the tutorial, begins. You begin with Link, and the game takes you through the different inputs (for example, A is your special attack) over the first half of the level, with various on-screen objectives like ‘defeat the Moblin’ to guide you. Of course, because this is a hack and slash, you can execute combos, and your options can be viewed in the menu. You also have weak point attacks, and they’re a blast to carry out.

Link comes across the (non-functional) Baby Guardian. Impa, the royal advisor, turns up (followed by a mob of Bokoblins), inadvertently activating the Guardian with her Sheikah Slate, and a Sheikah Tower pops up too. We have access to the Slate’s runes during combat now, and they absolutely add more variety to Link’s repertoire in particular, because though he feels like the ‘standard’ character (powerful, but not too flashy), the runes make things a bit more interesting. 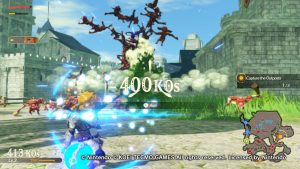 We also get to play as Impa now. Impa plays far differently to Link, and honestly she’s a little bit difficult to get used to. Her ‘symbols’ system allows her to summon a group of clones who mirror her actions, but it can get a bit chaotic. Regardless, she’s fantastic once you figure her out — you can also switch between characters, and the character you’re not playing as can be ordered to different locations on the map. As well as the Bokoblins and Moblins, other BoTW enemies pop up, like the Wizzrobes, and you need to think about what tactics you’ll need to take out each one, based on their individual attacks (so no button mashing!). 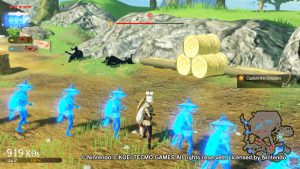 Once you’ve sent all the monsters packing, the level ends. You can see what weapons you’ve picked up, food items you’ve found, and various other collectibles that you received from clearing an area of enemies on the Stage Clear menu. Though it’s a decent enough opening level, and the cutscenes were great, there are two glaring issues.

The first is that the frame rate is nowhere near consistent. I found it chugging constantly, especially in the first level, and the last thing you need when there’s loads of stuff on the screen is for the game to turn into a PowerPoint.

The second is the resolution, in handheld mode at least: it just looked blurry (except for the cutscenes). I hope both of these issues are fixed by Friday, because I’m not the only one to have noticed them, and I can see it turning some people off the game. However, one thing immediately worthy of praise is the music: the map theme in particular is lovely. 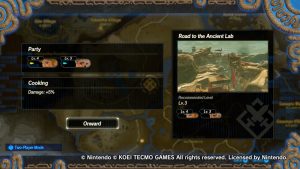 The next cutscene sees Impa puzzling over the Baby Guardian, who promptly starts running off towards the castle. We then meet Zelda, who definitely seems to be this game’s main character, because it feels like we’re seeing things more from her perspective than Link’s this time. 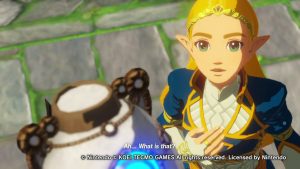 The Baby Guardian is unsurprisingly very attached to Zelda. They quickly discover the nature of the future that it came from, and that it came back to save Zelda, so Link, Zelda and Impa decide to travel to Hateno Village to meet with Robbie and Purah, two Sheikah scientists, to find out more. Of course it’s never that easy, and they get attacked by a rogue Guardian on their way, and then more hordes of monsters — and this is level two. According to the objective we have to support Zelda’s escape, but Zelda soon gets tired of being unable to do anything and joins the fight herself. She uses the Slate as her primary means of attack, with no access to weapons, and again she’s a bit difficult to get used to, because to me she feels slightly slow or even unwieldy. However, her ability to control a giant remote bomb is one of the best attacks available in the demo. 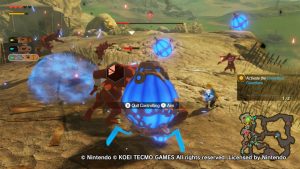 In order to defeat the rogue Guardian, they use unearthed Guardians against it, reactivating their lasers to fire on it. This is a really fun mission because when you’re switching between your three characters, who might even be dispersed across the map, and coordinating everyone, it truly feels like a team effort. 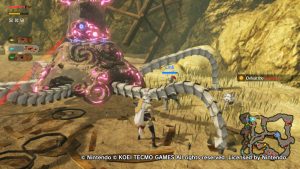 Once the rogue Guardian has been weakened and finally finished off (I got Zelda to do it), we see the three meet with the eccentric Robbie and Purah. Zelda speaks to the King of their plan to gather Champions, and he is typically cold and cruel, just like we saw in BoTW before the change of heart revealed in his diary — but he lets her go ahead with her plan. And that finishes the demo’s story content, with level two playing quite a bit more smoothly, despite some blurriness.

We can see the four areas on the map where the Champions are to be found, but they’re inaccessible. However, there’s a few more things we can do. You can make contributions to Hyrule by providing materials that you’ve picked up during levels, allowing you to make people happy, and also get access to shops. Donating materials also powers up different characters, and it all feels in character. There’s missions, too, like a timed challenge where you clear an area of Lizalfos, and a stage where you master remote bombs. All in all, for a demo, it’s pretty expansive, and there’s still stuff to do beyond the 30-45 minutes of story content. Your progress carries over to the full version, too. 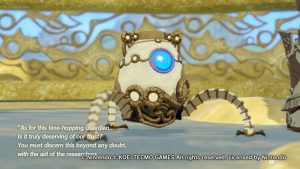 Overall, I’m absolutely intrigued. The gameplay feels simple enough but has a lot of space for those who wish to master it. Though we know what’s going to happen at the end, it makes the pre-Calamity world feel alive, with engaging characters and an insight into their motives. If the performance issues are fixed in the actual game, we have a worthy prequel to one of the best open-world games out there.