Hey, You Should Play This: ‘Resogun’ 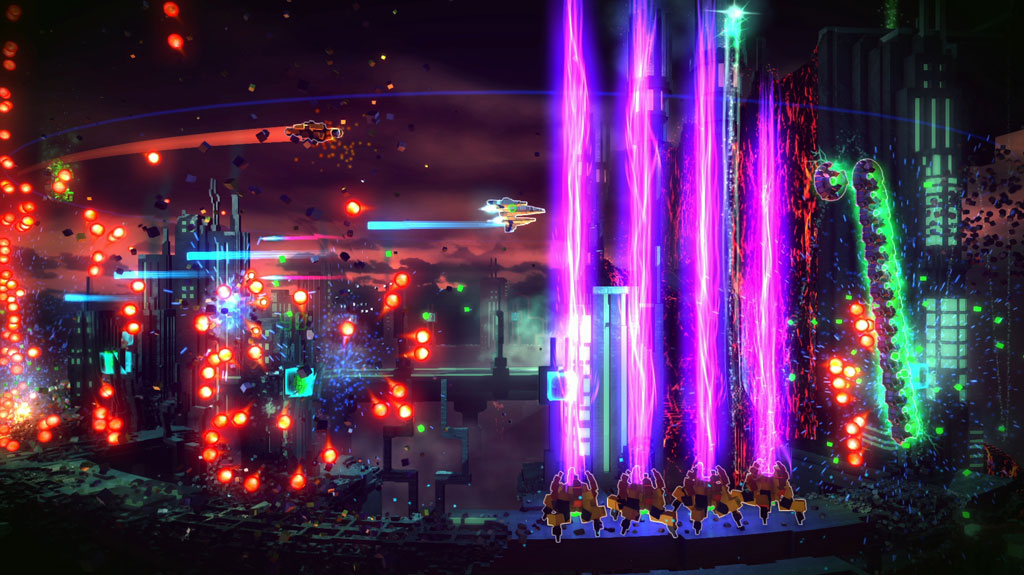 When looking at the admittedly short list of PS4 exclusives before it’s launch, there was one title that I nevertheless managed to pay very little attention to – Resogun. Having never really gotten into twin stick shooters and thinking I’d be dedicating my gaming time to the triple AAA, blockbuster launch titles, it was simply not on my radar. This was a mistake, for now, it is my most highly recommended PS4 game. So let me fill you in on this surprise hit.

Resogun is a twin stick shooter, played on a circular plane. Each of the five stages begins with an electronic voice (projected through the Dualshock 4’s speaker) telling you to ‘Save the last humans.’ These bright green figures, scattered across the map are locked in transparent cells. Once the level begins, enemy ships spawn with the primary goal of blowing you up. Other ships called ‘Keepers’ (identifiable by their fluorescent green tint) instead focus on preventing you from saving the remaining humans. To satisfy the electronic voice’s command, you need to shoot down all of the ‘Keepers’, at which point a human is set free from their cage, requiring you to find and fly them to safety. The stages have three distinct and increasingly difficult phases, before ending with a boss fight which are often the highlights of the stages, requiring far more acute aiming and increased reactions – although one of the five bosses battles is significantly under par and boring to battle against, as simply flying straight and firing backwards is sufficient for victory.

Yet the draw is not simply carrying out a rescue operation or blowing up hundreds of enemy ships but instead a desperate struggle for a new high score. In fact, the number of points you acquire is the measure on which success is judged; not the length of time survived nor how many humans have been saved – although both of those are important aspects to achieving a personal best. As you destroy enemy ships, you gain both points and an increase to a multiplier. This multiplier will continue to rise until reaching its variable limit, dependent on the difficulty level, unless one of two things happens – your ship is destroyed (achieved after just one hit from an enemy), or you go a few seconds without shooting an enemy/rescuing a human. These conditions work together perfectly, forcing a perfect balance of risk and reward. Too aggressive and you’ll find you don’t last the stage, too passive and your survival will have been simply to achieve a minimal score. That said, once the action starts, there is not often the chance to be particularly passive as, especially on the later stages, the screen is often filled with enemies.

To fight back against the seemingly endless waves of enemies, alongside the main gun of the ship, you are given a limited number of bombs, which clears out the immediate area around where they are detonated. The ships also have a rechargeable boost feature, which allows for quick movement around the circular plane and, more importantly, means crashing into enemies ensures their destruction, not your own (the opposite as to what would normally happen after a collision). On top of this, the ships have a chargeable ‘overdrive’ attack, which functions quite a lot like you’d imagine something called an overdrive attack would, slowing down enemies and allowing a more powerful attack to be fired off. There are three different ships to choose from, which differ in their main guns, boosting abilities, agility and the effectiveness of their overdrive.

With the minimal margin for error in a game where the enemies significantly outnumber you, the difference between it being frantic high score chasing fun and a frustrating failure rests significantly on how it controls. Thankfully, Resogun nails this aspect of the game. Especially with the new and improved controller for the PS4, I always felt in complete control of my ship. When failure comes from my own poor judgement or inadequate reflexes, I’m far more inclined to try again compared to when it comes from miscommunication between my thumbs and the ship. The only exception to this would be on rare occasion, in the most action packed sequences, I would crash into a small ship that was hidden in with the endless particle effects.

This brings me to my next point – it would be unfair to Housemarque (the game’s developers) to not mention the effort they’ve put in to make this look like a next generation title. Whilst the general aesthetic is fairly simple, the game shows off when it comes to particles effects. At the end of a stage, the boss ship explodes, alongside pretty much anything else left on the stage at which point the screen is made up almost solely of individual particles. This also occurs during the most frantic phases, when dealing with the potentially overwhelming number of enemies. This level of detail and graphical fidelity helps differentiate Resogun from anything on the PS3. Whilst it may not add anything to the gameplay and gives rise to the minor annoyance I mentioned earlier, it is nevertheless a satisfying sight to conclude a stage with. 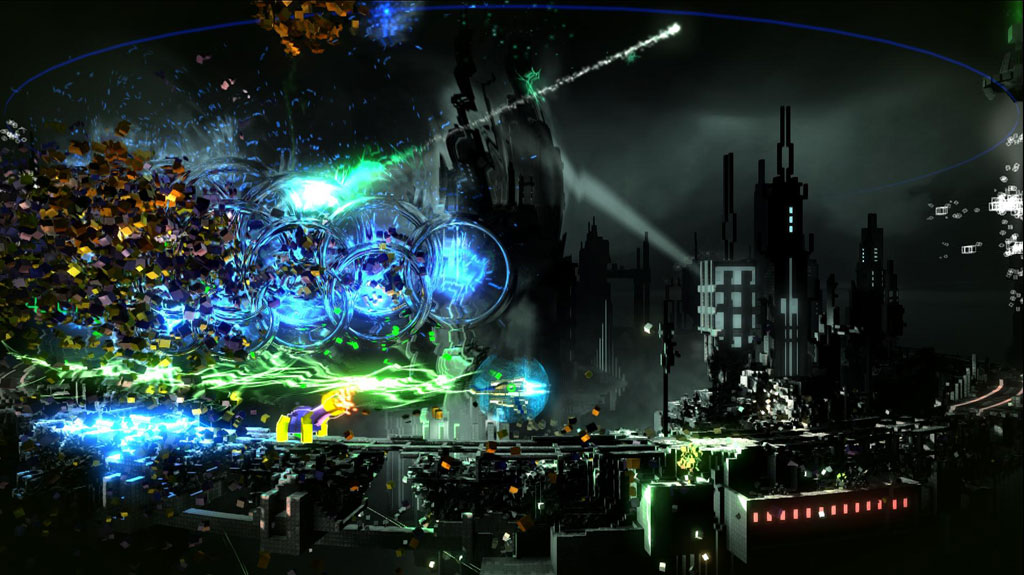 One other aspect of the game that I particularly like is the challenge, especially on the higher of the four difficulties. Admittedly this is a genre I’m inexperienced in, but nonetheless I can recognise that Resogun is not a game afraid of punishing the player. In arcade mode, where stages are played back to back, with lives (or too often in my case, lack of) and bombs being carried forward without being replenished, surviving long enough to gain a particularly noteworthy score is no easy task. On potential high score plays, where I complete stages without a hiccup, I cannot help but feel proud of my feat.

The high level of difficulty and the naturally addictive task of attempting to beat any previous personal best not only makes Resogun a game that provides potential for giving off a strong sense of accomplishment, but also one that is highly replayable – although this is perhaps necessary to balance out the otherwise small amount of content, as if the appeal of chasing high scores was removed, all that Resogun has to offer could be seen in a couple of hours. But the thrill of breaking a record makes Resogun a game I keep coming back to – and most likely will do for the foreseeable future. After all, 43,521,570 is a significant improvement over my first efforts, but I reckon I can still do better.