Destiny 2’s ‘The Dawning’ was a seasonal event done right

Contains minor spoilers for Destiny 2’s Season of the Hunt

Destiny 2 is often a particularly sad game, despite how fun it can be. It’s a loot-based first-person shooter set in a sci-fi world, where you play as an immortal being called a Guardian. There’s a huge variety of activities to participate in (both on your own and with a team), different game modes, and unique environments to visit. There’s even quite a bit to do if you’re playing the free version, but if you want to play various storylines you’ll need the expansions and season pass. I particularly like the vast collection of lore that the game universe has: there’s history on top of history, stuff no one understands yet, endless speculation, and lots of secrets.

But this sprawling story is frequently steeped in tragedy. It’s a game about loss just as much as it’s about loot.

However, from December 15th to January 5th, it was also about biscuits.

And that’s thanks to the Christmas/seasonal event, The Dawning. Eva Levante, the honorary grandmother of every Guardian, set up shop in The Tower (the central social area, essentially a hub world where many of the game’s vendors are situated) and gave you an oven, determined to spread holiday cheer to everyone. With The Tower decorated beautifully and new festive music, it was hard to miss. 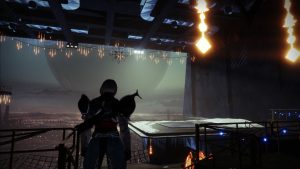 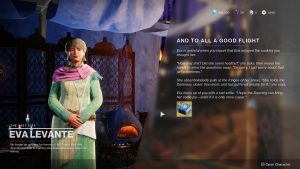 I found it pretty easy to gather these ingredients, because it wasn’t as if you really had to go out of your way to get them. Strikes (fifteen-minute long missions) were a decent way of farming ingredients, as were Lost Sectors (five-minute long activities taking place in areas that are often underground, packed with enemies and that have a chest you can loot at the end). Strikes also rewarded you with Essence of Dawning in pretty large quantities. As a result, it wasn’t hard to get a lot of ingredients in a pretty short space of time just by playing the game like normal, though some ingredients were more bountiful than others (Null Taste took quite a while to drop for me, for example). The thought of anyone actually eating these ingredients is a bit… odd (Vex Milk, anyone?), but I’m sure everyone appreciated the sentiment. 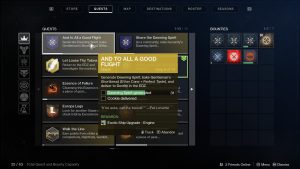 Eva had a few more things on offer. There were three quests associated with The Dawning: ‘The Dawning Begins’, ‘And To All A Good Flight’, and ‘Share the Dawning Spirit’. ‘The Dawning Begins’ was simply an introductory quest; ‘And To All A Good Flight’ gave you a unique ship and let you upgrade it by delivering cookies to specific NPCs, and also by generating Dawning Spirit (not to be confused with the Essence, of course: this is something more abstract that’s supposed to represent the goodwill of the season); and ‘Share the Dawning Spirit’, which required the generation of 1 billion Dawning Spirit by the entire playing community. I genuinely liked how these quests were done: the single-player quest let you feel more connected with the game world, and the community quest was a team effort with your fellow players. Eva also offered ‘Gifts from Dawning Past’, that could be purchased with a few of the game’s different currencies, and also lots of different bounties, that rewarded things like XP, Dawning Spirit and random ingredients upon completing them. 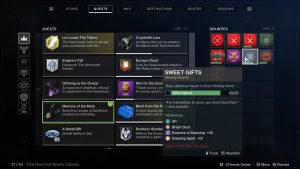 The most charming part of the event, though, was of course the actual baking. You started off with lots of empty slots, representing cookies you haven’t made yet, and I imagine you were meant to experiment in order to discover the recipes for each cookie: however, I think most people found guides online, to save time and resources. Once you made all the recipes, you could ‘masterwork’ the oven, so it only required 10 Essence of Dawning instead of 15 to make cookies. 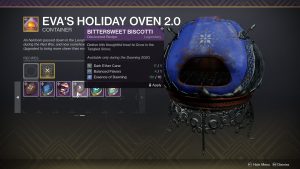 Each Dawning treat was given a name appropriate for their intended recipient, and you got an often quite funny little description of how they responded when you handed it over. To list a couple, for the shipwright Amanda Holliday you made Chocolate Ship Cookies (groan); for Eva herself, Classic Butter Cookies; and for the, uh, popular new character Shaw Han you made Blueberry Crumblers. For many, though, the highlight was being able to give The Crow, another new character, some much-needed appreciation. Since he was brought back as a Guardian we’ve seen him go through an unfair amount of grief (both due to the sins of his past life, and his current circumstances), and if you didn’t immediately warm to him after seeing his reaction to being given some Bittersweet Biscotti, I don’t know what to tell you. 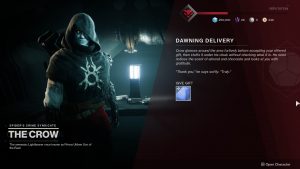 Making enough cookies gave you a ‘Gift in Return’, containing various bits and bobs that you might find useful (although I’m not a huge fan of one of the new weapons for The Dawning this year, Glacioclasm). But really, getting something in return wasn’t the point. Though a few characters were missing from the list of cookie recipients (I would have liked to have given Osiris some, for example), this event was a great way of getting to know these characters more, something all-the-more valuable for new players. It felt like a seasonal event with a lot of heart, and a way to get a bit more out of this vast game world, with not much effort required on our parts. 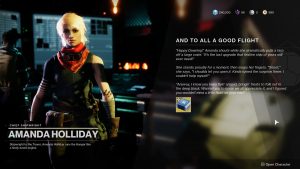 Even though you really shouldn’t touch any of those cookies with a bargepole.