Deltarune Chapter 1: the beginning of an adventure in the dark

All screenshots and the featured image were taken by Cappi Lau. 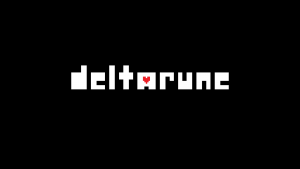 For those who have played Undertale before, Toby Fox has set up this survey program to ask for a creation. You’ll create a vessel that you wanted, essentially a shape of yours. Once you’ve finished, you’ll have your wonderful creation, and the results will be sent to the domain of the survey setter…

WARNING: due to the similarities of this with Undertale, a lot of context about their relation would be discussed below, including potential spoilers, so please stop here if you haven’t gotten into either of them.

Actually, no, if I wanted you to just complete a survey for a popular game, I won’t be posting it in the gaming section. True to Toby Fox’s reputation, this is far more than just a survey program. Once you have your wonderful creation, they…

…will then be discarded. And the system will tell you a dark message: no one can choose what they want to be in this world, and you are playing as a human child known as Kris, who lives with monsters on the surface. Their adoptive mother is Toriel (yes, Goat Mum!) and their brother, Asriel (yes, he’s alive!), is in university. Kris then enters their classroom, finding someone to partner with for a project… 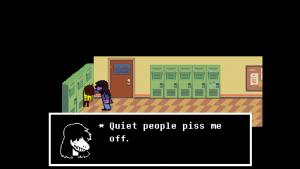 Susie doesn’t start off to be friendly…

Then they meet Susie, the bully that nobody likes, who is forced to go fetch some chalk in the cupboard for Alphys with them. What they didn’t know was that this cupboard made them fall into a Dark World, and from Ralsei, a Dark Prince with no subjects, they discovered a fate to fulfil. They will set off a journey to find a way for Kris and Susie to go back home and restore peace to the world…

Currently, only one chapter of the game is released, yet within the three short hours of gameplay, not only did I find the experience very enjoyable, but it also brought me back the vibes when playing Undertale.

After playing the game, one could basically see how much Toby has improved, since it started to look like a traditional RPG.

In terms of the battle system, the bullet hell + RPG-style battle system has returned, which I liked, but you can now control multiple unique party members, and graze bullets for TP, which could be used for magical powers by Ralsei and Susie. Ralsei can use pacifying and healing magic, while Susie can deal a huge burst of damage. Kris is a muggle, but they can ACT in various ways to advance the battle. With the right combinations of actions, anything is possible. Finally, it’s what a team adventure is! 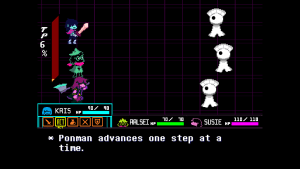 A battle in the game.

Outside of battles, I also quite like how some of the puzzles were laid out. Most are quite easy (and two were just played for laughs), but a few were quite challenging, like those that are required to get the key pieces. Mind you, the ballerinas didn’t help for you to find the path to one of them…

The soundtrack (literally) moved me, just like Undertale. The recurring theme, “Don’t Forget”, is used as a leitmotif for many of the soundtracks in the game, like “Field of Hopes and Dreams”. The melody is not only beautiful, but also oddly familiar for some reason. Maybe it just fits the situations so well that it was relatable. Others like “Chaos Buster” and “Chaos King” are awesome too, that they brought up the whole atmosphere.

“The Legend” is definitely one to praise. If you compare it to “Once upon a time”, this one definitely sounded more majestic by using an orchestra, and makes one feel like they have an actual mission to accomplish, despite both being storytelling tracks. In this game, you can create a DUCK to…well, the picture says it all.

Like Undertale, Deltarune made good use of cheesy humour to depict events and characters in the story, telling a great story of an adventure. As a result, there is no short of lovable and memorable characters. The main cast showed it off the best: Ralsei is an adorable fluffy boy and a pacifist. Lancer is the son of the evil King, but he’s a cheerful little kid who just wanted some appreciation. Susie started off as a mean bully, who often resorted to violence. When Lancer started to get along with her, however, things started to take a turn for her and the heroes, and she experienced the greatest development arc out of all the others, in an excellent way. 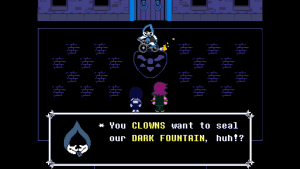 Even other NPCs are unique on their own, just like those in the predecessor. Sure, some might try to kill the heroes, but if you talk to them, you’ll get to know them better, and even find a peaceful resolution. Even Rudinn Ranger, an enemy late in the game, was very easy to compliment (“You’re unbanned from free ham sandwich day.”). 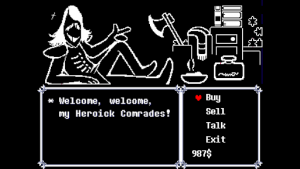 Rouxls Kaard, one of the funniest characters in the game.

However, the themes in this game are darker and edgier than Undertale (since it takes place in the DARK World). Sure, like the previous game, you can choose to befriend the NPCs instead of beating them, and the game still encourages you to do so, but this seemed to be less of an emphasis. Notably, how you choose your options and beat the game changes only some dialogues and the farewell sequence respectively, but the overall storyline remains the same, not to mention having only one ending, meaning no matter how good you are, some things just cannot be controlled. Also, unlike any character encountered in both games, the final boss of this game is an evil beyond measure that cannot be reasoned with. It was only by certain means of violence can the heroes put the battle to an end, showing how not everything can be resolved with kindness, which is what it actually is in real life. Even at the beginning, Susie basically told us how the game would be in one simple line (though not for that intention).

Doesn’t this look more cynical than the idealism portrayed in the previous game? In my opinion, this even gets reflected by the appearance of the main protagonist: you’re playing as a young teen (Kris) instead of a little child (Frisk), so their thoughts would be a bit more realistic. The themes of their respective games even suit them.

Despite the dark theme, the game is still a loveable one with great improvements. If you like cheesy humour, decent storyline and gameplay like Undertale, then this is definitely one that you should try.

Still, this is just Chapter 1, so this leaves many questions left unanswered. Notably, in the Lightner world, Noelle, a friendly yet timid monster, seems to gain more focus than other non-main NPCs. She’s likely to join the protagonists in the adventure, so how will things turn out? Also, the King is just a pawn of the KNIGHT, the greater-scope villain. With the King being that horrible, how much worse is the KNIGHT? Furthermore, despite being two separate worlds, there is obvious linkage to the Easter Eggs of Undertale in this game, so what does this imply?

There’s a lot more that could be discussed, but it’s sure that this is a good start, and whatever comes next, we can expect great things from it. In the meantime…