While this is mostly spoiler-free, this contains some spoilers for the beginning of the game.

A stereotypical video game protagonist is someone who is morally upstanding, courageous, just unambiguously an all-round good person.

Vincent Brooks, the protagonist of the mature puzzle-platformer Catherine, is not exactly one of these good people. Catherine originally released in 2012 on PlayStation 3 and Xbox 360, and received an enhanced remake for PlayStation 4, Catherine: Full Body, in 2019, the Nintendo Switch port of which arrived on July 7th of this year. 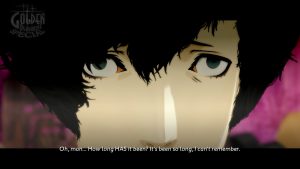 He’s a 32-year-old software engineer in a long-term relationship with the competent and successful Katherine. But Vincent isn’t like Katherine – he’s pretty irresponsible for his own wellbeing, largely stagnant, and spends every evening drinking at the ‘Stray Sheep’ bar with his friends: Orlando, Jonny, and Toby. So when Katherine starts telling Vincent that she wants to progress their relationship, marriage is suddenly on the table. Vincent just wants things to stay the way they are, but Katherine does not.

Later that night, when he is alone at the Stray Sheep, a mysterious, beautiful woman turns up. She seems to understand Vincent’s problem with commitment, and Vincent is, against his better judgement, drawn to her. He becomes embroiled in a relationship with this woman – whose name is Catherine. 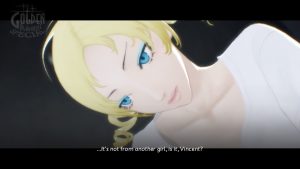 Vincent ends up having to hide one C/Katherine from the other as the awful mess continues, with neither having any idea that the other exists. Conversations with Katherine get increasingly serious, but Vincent also doesn’t understand how he keeps ending up with Catherine, who just seems to appear in the bar night after night.

His friends criticise him for his actions (particularly the waitress, Erica), but Vincent, as ever, doesn’t know what to do, or even how he got into this mess in the first place. To make things more complicated, Vincent finds and soon befriends an amnesiac named Rin, whom he helps get a job playing piano at the Stray Sheep. And to make things even more complicated, he starts having nightmares every night where he has to climb a tower consisting of movable blocks. Pushing and pulling the blocks, and climbing along the edges of the blocks, creates a path upwards, and he has to reach the top to escape, while blocks below him fall layer by layer. This is the mysterious ‘Woman’s Wrath’ that’s going around, an apparent curse where men cheating on their partners have these nightmares every night. Men who fall off the tower and die in the dream, die in reality. 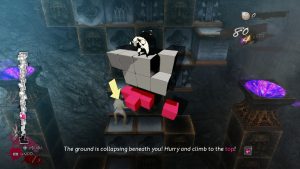 So the game is split in two halves: Vincent’s waking life, mostly spent in the Stray Sheep – this is also where most of the cutscenes, and the story progression, happens. When Vincent goes to sleep, he has the tower-climbing nightmares, and this is the puzzle aspect of the game. I really enjoyed this duality: Vincent is mostly unable to remember these dreams, but his friends and other bar patrons talk constantly about the “curse”, meaning that the nightmares encroach on his waking life. Furthermore, the whole game is framed as a feature from the ‘Golden Playhouse’ and its host, Trisha, allowing it to play out like a drama. 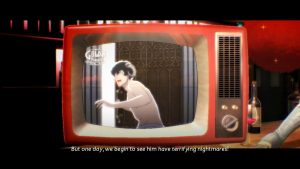 The block puzzles are without a doubt my favourite aspect of the game, and equally the most infuriating. You have to navigate a different ‘Stage’, consisting of several levels, every night for a week: for example, the very first Stage is called the ‘Underground Cemetery’, the second night’s Stage is the ‘Prison of Despair,’ and so on. At the end of each Stage there’s a boss level, where Vincent is chased up the tower by various nightmarish things. When you have completed the Stage, Vincent wakes up. Between levels, on the ‘Landing’, you’ll encounter talking sheep (other cursed men), and several share climbing techniques with you. There’s also a mysterious voice who torments Vincent in the Confessional Booth on the Landing, and puts various questions to him. The choice that you make affects the Mysterious Meter, and this gauge also appears when making dialogue choices when Vincent is talking to people whilst awake (and sometimes, when talking to the other sheep between levels). You can also see a chart representing the choices other players made. These choices are important when determining which ending (of 13) you’ll end up getting, but for your first playthrough I recommend just choosing what best corresponds to what you would answer, to make it more organic. Your choices also affect Vincent’s reactions in cutscenes. 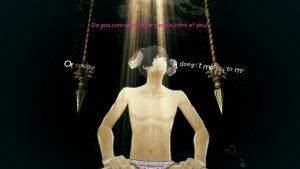 Confusingly, Rin begins appearing in these nightmares, but lends a helping hand to Vincent and the other sheep. This is extremely handy when the puzzles start getting more complex: the levels start off fairly easy, with only one type of block, but quickly new varieties of block are added, like blocks with spikes in that pop up and can kill Vincent if he stands on them at the wrong time, or ice blocks, that send you flying to the edge if stepped on. 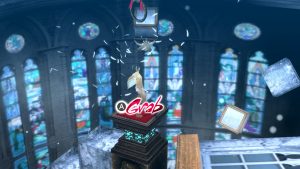 Vincent’s waking life, mostly explored in the bar, is where the detail obviously put into this game really shines through. You can freely walk around and interact with patrons and objects in the bar, as well as speak with Erica, Rin and Boss (the proprietor of the Stray Sheep, with a past as shady as Vincent’s present). 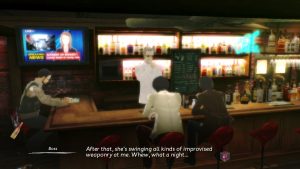 You can also use your phone, and I thought the whole interface of the message system was extremely clever, because it’s where you get a lot of information about the puzzles, as well as how to best use your free time in the bar (because time passes after you perform certain actions, so patrons will come and go). Characters will message you, sometimes send you photos, and you’ll frequently receive phone calls from both Catherine and Katherine (but there’s no obligation to answer). Furthermore, with your phone you can challenge levels again, rewatch cutscenes, and save the game.

The arcade game Rapunzel lets you practice the block puzzles, and if you finish your drink you’ll hear trivia about various types of alcohol. Given that this game was developed by ATLUS, the same people who made the Persona series, there’s several nods: toys of Persona 3, 4 and 5’s Koromaru, Teddie, and Morgana sit on the bar, for example. Furthermore, the music in this game is absolutely fantastic, with each stage soundtracked by a piece of classical music (often with guitars and drums added in), and wonderful original tracks too. 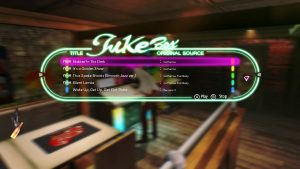 You might think the game’s main theme is love, and to a large extent it is, but it’s not quite as clear-cut as that. The plot is deeply complex, and there are several points that I can’t mention now, for spoiler reasons. Vincent’s reaction to one particular event does not put him in a good light, but he is criticised heavily for it. Some of the comments of his friends concerning one character in particular might also be considered very questionable, but equally their acceptance of this character makes the situation not very clear cut at all. So bear that in mind.

Overall, the best word for Catherine: Full Body is perhaps ‘experimental’. As one of the few Rated 18 games on Switch, it’s interesting to see a game like it on this platform. The puzzles are everything you would want, but you might find it hard to get past Vincent’s apparently broken moral compass and ineffectual nature. While this game is consistently wacky, sometimes heartbreaking and often terrifying, it is never predictable.