Bayonetta, a perfect game for Halloween

All screenshots, including the featured image, were taken by me.

I really wanted to write something for Halloween, something truly befitting of THE best holiday. There’s a few topics I could have picked from: the popularity of horror games like the Resident Evil series; creepy errors and glitches in games; even cutesy spooky stuff like the Halloween events in Animal Crossing: New Horizons. However, nothing seemed more appropriate than a game I started only recently, but that has grabbed my attention like few other games have managed to do.

I am of course talking about Bayonetta, a game starring a witch. 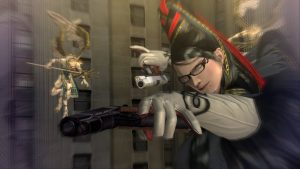 This game sits in the hack-and-slash genre, so it shares a great many similarities with Devil May Cry and other games of that ilk. (As an interesting aside, Hideki Kamiya developed the first Devil May Cry game, and then went on to leave Capcom and form Platinum Games, who developed Bayonetta). Stylish and fast-paced combat, punches and kicks to string together combos, and of course a variety of guns and swords that you can switch out on the fly are standard for this genre, along with hordes of enemies (usually demons or some sort of monster-thing) and, of course, plenty of showing-off. 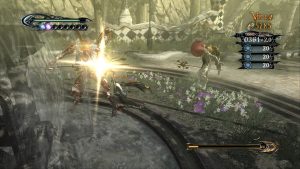 So, Bayonetta was released in 2010 for the PS3 and Xbox 360. It later received a release on the Wii U (because Bayonetta 2 ended up being a Wii U exclusive for a while), and then both were ported to the Nintendo Switch. It also received a PC port in 2017, which is the version I’m playing (using my Switch Pro Controller). I snagged my copy during the SEGA anniversary sale on Steam for just under £4, which is a steal when you consider the fact that it’s £25 on the Switch eShop (and even though you get a discount on Bayonetta 2 or vice versa, it’s still £50 for both, which seems a bit cheeky). Bayonetta 2 would never have happened if it were not for Nintendo’s extra funding, which is probably the weirdest thing you’re going to hear all day when you consider the overall tone of these games. 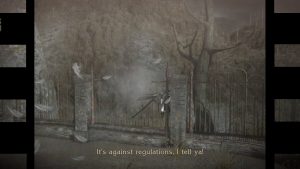 But back to the original Bayonetta. The titular character is an amnesiac witch. She awoke from an excessively long bath in a lake (500 years long, to be precise) about 20 years ago, with no knowledge of how she got there. She is a bit snarky, sometimes mischievous, and (despite what you might have heard) not an over-sexualised stereotype. She completely owns who she is, and is confident in her power. On this topic: if she was a side-character to a male protagonist, I’d perhaps agree that her presentation is bordering on the offensive, but as the main character, I absolutely love how she uses her femininity to her advantage. Frankly, Bayonetta just wouldn’t exude the amount of personality it does without Bayonetta’s character design. And she was designed by a woman (Mari Shimazaki).

Bayonetta is told by Enzo, the resident comic relief character, that she should find the other half of two ancient relics, The Eyes of the World. She has the Left Eye in her possession already, she thinks, but the Right Eye is missing. Bayonetta also keeps encountering Jeanne, another witch with similar powers to her own. She taunts Bayonetta a lot, about both her missing memories and some stuff that verges close to being personal, so there’s clearly something going on that Bayonetta doesn’t quite remember. There’s Luka too, and he also has a bit of a problem with Bayonetta (what can I say, she’s popular). A mysterious child called Cereza starts to pop up as well. 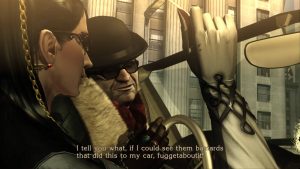 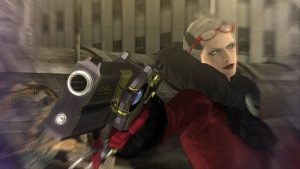 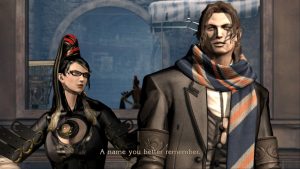 There’s more exposition with the two main groups, the Umbra Witches and Lumen Sages, revealed gradually, and the fictional European town of Vigrid sees a lot of the early game’s action. In fact, the story is perhaps slightly convoluted, but it doesn’t really feel like the focus of the game. 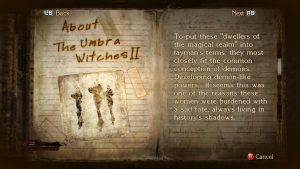 That’s not a criticism of the dialogue, though – far from it – because everything so far is really well written. It will flip from hilarious to heartfelt to terrifying, and is helped by some great voice acting. You will never get tired of hearing Bayonetta taunting her enemies, that’s for sure. 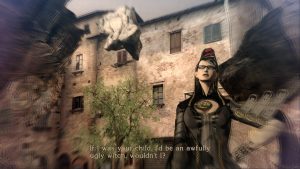 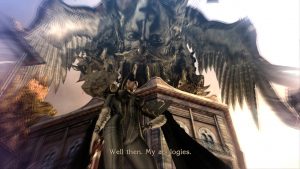 Speaking of taunting the enemy, let’s talk a bit more about the combat in Bayonetta, because that is what the game revolves around. Aside from your usual hack-and-slash fare discussed earlier, there’s two things that make combat in this game an absolute blast:

The first is the ability to trigger Witch Time. If you dodge at the exact right time, just before an enemy hits you, you enter Witch Time: everything slows right down and goes purple-tinted for a few seconds, but you can still move at normal speed. This lets you get your combos in and take out enemies, all while they can’t get a hit on you. Witch Time is so much fun because Bayonetta will usually come out with a goading one-liner, and it’s very exciting to utterly bamboozle your enemies. 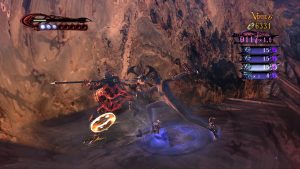 The other happens when you pull off a combo, unleashing a powerful attack called a Wicked Weave – essentially the summoning of a massive hand or foot that will probably take out your enemy in one go. A more powerful finishing move consists of a huge hair demon. Bayonetta’s hair is in fact the source of most of her power, and the rest of it derives from her guns (two on her hands and two on her feet). 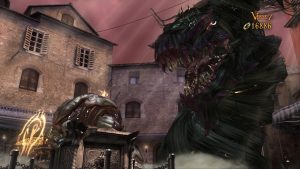 The first set of guns you get are called ‘Scarborough Fair’, consisting of Parsley, Sage, Rosemary and Thyme (just like the song!), and you can buy more weapons from the shop: a cosy place called the Gates of Hell. 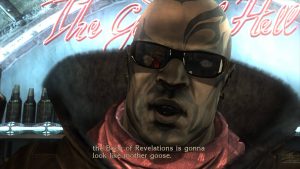 Rodin will sell you not only weapons, but healing items; new techniques; and various accessories. There’s always a cutscene when you enter the Gates of Hell, which can get a bit annoying after a while, but at least you can skip it. 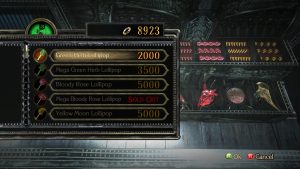 The Gates of Hell

You cannot, unfortunately, skip the quicktime events. I am not a fan of these in most games, but the ones in Bayonetta are a total nightmare. True to the name, they’re peppered throughout cutscenes, so you can be watching some ridiculous destruction take place one second, and then the next Bayonetta is dead because you didn’t press a button quickly enough. They can also be confusing in their implementation, especially when they fail to explain what they actually want from you.

But at least you get to appreciate how beautiful the world looks before you mess up the quicktime event. Vigrid itself is gorgeous (it even looks nice when it’s on fire, somehow) and definitely a highlight. They’ve done an exceptionally good job with the PC port because this game is barely showing its age – and though there’s some framerate drops when things get a bit chaotic on screen, that doesn’t ruin any enjoyment. In fact, bombastic action set pieces are par for the course, but they don’t ever feel like overkill. How can you get bored of those scenes when you’ve got Bayonetta taking out one enemy with her leg and another with her hair? 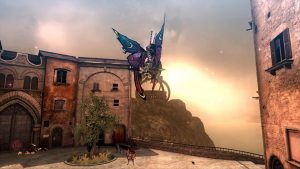 That being said, this game is not forgiving. You’ll notice a pretty sharp difficulty curve around Chapter 3, but it’s not unfair… you might just die a lot before you get the technique down. But even that’s OK, because it lets you try out different combos, lets you understand the enemy’s attack patterns a bit better, and furthermore you won’t get kicked back to the start of the chapter when you die, because there’s a decent checkpoint system. And even if you have to do sections again, the battle theme (‘Mysterious Destiny’) is good enough that you won’t mind at all (and due to an entirely self-inflicted save issue I had to play a boss fight against Jeanne about three times, but ‘Battle for the Umbra Throne’ made it well worth it).

So overall, I have to conclude that this game is well worth playing, even if you end up paying £25 for it. Its atmosphere is perfect for the season, and even when it’s no longer Halloween, it’s always witch time.