So Animal Crossing: New Horizons released on March 20th, and for the first couple of weeks it was perfect.

An idyllic game about moving to a deserted island, with nothing but the clothes on your back, two animals who also made the journey – 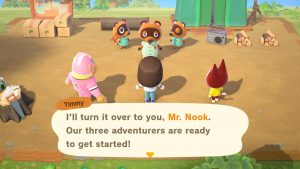 Rocket on the left, Rudy on the right

a raccoon tycoon who organised the whole getaway package deal – 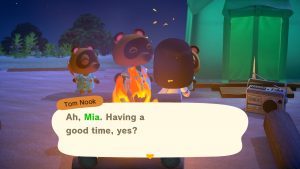 and his, um, nephews? Sons? Employees? 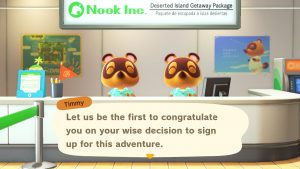 – to start a new life. What could be better, in a time where we all desperately need distraction? You can upgrade your tent into a house (via Nook Miles, a new virtual currency Tom Nook invented), accumulate furniture, fish, catch bugs, invite more animals to your island… it’s Animal Crossing gameplay as we all know and love it, with a twist. For example, the museum is not there straight away – you have to donate fish and bugs to Tom Nook, and he then summons Blathers the owl to the island, where the museum is eventually instated. Getting the tailor’s up and running is similar.

DIY tools and furniture are a big part of what is new here: you collect materials such as different types of wood, iron and stone, to craft things. Unfortunately, there’s a bit of Breath of the Wild peppered in here, because all tools break, flimsy ones faster than stronger ones – but that’s a story for another time. 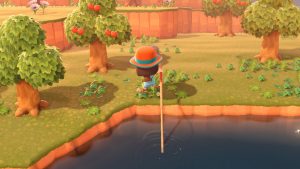 Vaulting across a river

You can cross the rivers with the vaulting pole and climb the cliffs with the ladder, but you have to wait a couple of days to get these. Eventually, you can even terraform your island.

Then the eggs came.

When I first noticed, at the start of April, the eggs growing on the trees, in the water, popping out of rocks, in the ground where fossils normally were, I thought “Oh, right, the Easter event!”. It was funny at first. I didn’t mind too much, even when the number of balloons carrying Sky Eggs and Bunny Day DIY recipes drifting over the island far outweighed the number of normal balloons. 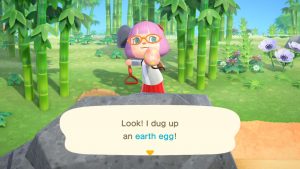 However, as the days went by, things started to get out of hand.

The amount of Bunny Day dialogue I was hearing from my islanders was unbelievable. Everyone seemed to be under the impression that I had no idea what an egg even was. Nearly every time I spoke to one of my islanders, they would tell me about this UNBELIEVABLE story they’d heard. Apparently, eggs were appearing all over the place! Apparently, Wilbur gave them some top-secret information that on a Nook Miles Tour, if you hit the rocks or shake the trees, eggs would appear! And did I know that Bunny Day was on April 12th?! 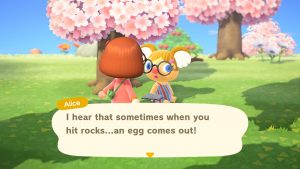 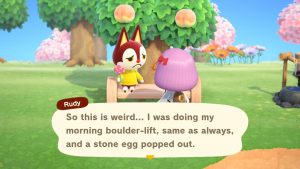 Again, at first I didn’t have a problem. But it got ridiculous when no one talked about anything but eggs and Bunny Day. It was all anyone seemed to be thinking about, talking about, dreaming about. I was surrounded by Bunny Day this, Bunny Day that, and my pockets were overflowing with eggs. I was begging anyone to talk to me about anything apart from Bunny Day, but I didn’t get my wish. It was just more Bunny Day dialogue. There was no escape.

And then April 12th arrived. I started up Animal Crossing with fear in my heart. The islanders were walking about dressed as eggs, and honestly if I hadn’t been completely sick of Bunny Day by that point, I would have found it pretty adorable. They were still banging on about eggs so not much had changed in that regard.

I walked to the plaza, and there stood Zipper T. Bunny, the one responsible for all of this, in front of Resident Services. 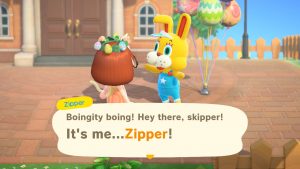 He was hopping about, drumming up excitement for Bunny Day presumably. He gave me several tasks: first I was to bring him one of each type of egg, which I did. Then, I had to build everything in the Bunny Day set. I’d found most if not all of the DIY recipe cards in the previous few days, and had constructed a lot of it already. The furniture also sold for quite a bit of money, so that could have been worse. Although I’d sold nearly everything, as long as you had constructed them at some point, they still counted towards the total. I built the missing pieces and went to Zipper.

My reward? Another DIY recipe.

I was stuck now between wanting nothing more to do with Bunny Day ever again, and feeling like I had come too far to give up. If I quit, however, that would mean conceding defeat to Zipper and Bunny Day itself, so I set about collecting several of each egg type to create (what I would discover was) the second-to-last Bunny Day recipe, a toy that looked like Zipper.

I had also noticed something slightly disturbing. When no one was looking, Zipper would cease his excitable hopping and sigh, defeatedly. What was going on there? Did he hate Bunny Day more than anyone else? There were clues that he was grumpy, even jaded, in his dialogue, and it was obvious that he wasn’t even a rabbit at all, but something in a rabbit suit – was he an animal, a human, or…? 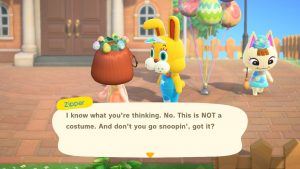 I tried not to think about it too much. Instead, I collected all the eggs, crafted the toy, returned to Zipper, and received…

…another DIY recipe. For the Bunny Day wand.

Wands allow you to change your outfit without a wardrobe when out and about, but they require three star fragments to craft, which you can only obtain from meteor showers, and at the time I had only one star fragment. Therefore, I would have to wait until I got more star fragments to construct this wand, the apparent reward for my island having been transformed into Egg City. 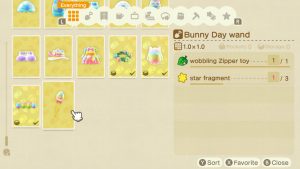 Was it worth it?

I will let you work that out for yourself.

But the interesting thing about Bunny Day was that it was so self-aware. It was entirely meant to be over-the-top, not really taking itself seriously – the ambiguous identity of Zipper T. Bunny was a prime example. The problem was, though, that the whole event went on way too long and largely obscured the cherry blossom event, which gave you far nicer furniture and was just overall less in-your-face. I would have rather seen the Bunny Day event last from, for example, Good Friday to Easter Sunday, making it more of an achievement to have gathered all the items. Either that, or they really should have toned down the amount of eggs, and reduced the amount of Bunny Day dialogue for the islanders.

I was relieved when everything went back to normal, and I could enjoy island life as was originally intended. 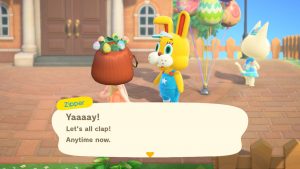