St. Patrick’s Day is fast approaching. Where for one day only we all don green and celebrate everything Irish. Yet this year I have stepped away from the St. Patty’s day diet of Guinness and corned beef, dumped the green food colouring and attempted to create some homely Irish recipes – some traditional Irish ‘soul’ food.

Anyone who knows me knows my deep love for one-pot wonders.  They are cheap, easy, and hassle-free. Sometimes as a student the last thing you want to do is cook. Just looking at your flat-mates week old pile of washing up is enough to deter you. Yet one-pot wonders, no matter how little time you have, allow you to whip up a hearty meal with plenty spare to keep you going for the next few days.

So, coming across a recipe for Dublin Coddle I was absolutely sold. A traditional Irish one pot wonder. A Dublin coddle is the perfect end of the week staple, using up your rashers, sausages, and potatoes.

Like any proper dish, a legend surrounds it. Tradition dictates that steadfast Irish wives would throw everything in the pot, go to bed and not return to it till their husbands returned from a night of heavy Guinness drinking down the pub. 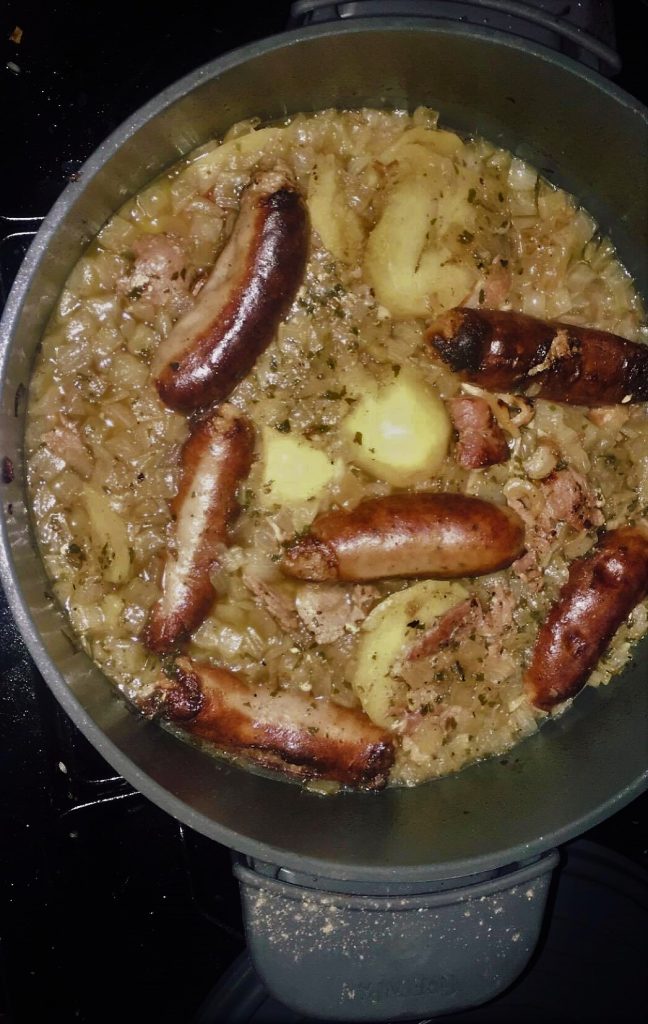 Such a hearty and scrumptious dish.

A low and slow cook, this authentic dish caused the house to smell amazing. The perfect meal for craving warm comfort food on a cold Durham day.

First as always, preheat your oven to a low temperature of 150 degrees. Peel your 2 pounds of potatoes. I would recommend using waxy potatoes like Red potatoes as their moistness complements a scrumptious stew. Cook six rashers of thickly cut bacon till bronzed then brown six fat pork sausages on all sides. The more caramelized the better.

Then sauté your two diced onions, until they begin to brown as well as two finely chopped cloves of garlic. Bring your dish off the heat and then you can begin to layer. Disperse half the potatoes on the bottom of the pot. Season well with pepper and chopped parsley. (Though as a student dried parsley will work nicely.) Then add your onions and garlic and half the bacon. Repeat the process on the next layer with the leftover ingredients and place your sausages, preferably still whole on the top.

The last crucial addition to the pot is your 900ml chicken stock. Do not submerge the ingredients in liquid. Only partial submergence is necessary to allow the dish to cook in the steam that is released from the stock. It allows the caramelization of the dish when it meets the hot oven air. Walk away from the dish for two hours minimum to do your studies or Netflix procrastination. Though you can leave it bubbling away for up to four hours to intensify the flavours.

On tasting the coddle last night, I immediately fell in love with the simplicity and humble flavours of the dish.

Now every hearty stew needs a nice chunk of bread to serve alongside. Yet due to my deep-seated fear of baking bread thanks to Paul Hollywood and the Great British Bake Off. I searched for a recipe without yeast, and that would be simple enough for a student.

The luck of the Irish was on my side when I came across a recipe for four Soda Farls, an Irish soda bread that was quick and easy. The fact that the ingredients, plain flour, salt, sugar, and Bicarb except for buttermilk were at hand in my student store cupboard urged me to give this harmless recipe a try.

Firstly, tip the flour into a large mixing bowl and stir through half a tablespoon of salt, one tsp of sugar and a heaped teaspoon of the same amount of bicarb. Then making a well in the centre, pour in the buttermilk and mix it to combine. Tip the gooey mixture onto a floured surface and begin to knead briefly. Alas, Mr. Paul Hollywood would not have granted me one of his infamous handshakes for my kneading skills.

Then, roll the dough into a 20cm circle and cut into quarters in whichever shape you please.  I chose triangles yet in hindsight with my lack of mathematical proficiency I probably should have stuck to something more irregular. Yet, the opportunity to bring out the Nikita rolling pin again was welcomed. Then, rather to my surprise you cook the dough in a frying-pan over a low-medium heat, 8-10 minutes on each side, till cooked through.

Bringing back out my trusty Nikita rolling pin.

Voila, there you have a simple bread-like accompaniment to the delicious stew. Though mine did not turn out exactly like the recipe’s picture, my flat-mates gobbled them up with some jam and butter, so I count it as a success!

My version of a traditional Irish Soda farl.

Attempting new recipes and embracing other cultures through cooking is always rewarding. I highly urge you to dig out some traditional Irish recipes to eat whilst you wear green and sip Guinness at home for this year’s St. Patrick’s day.