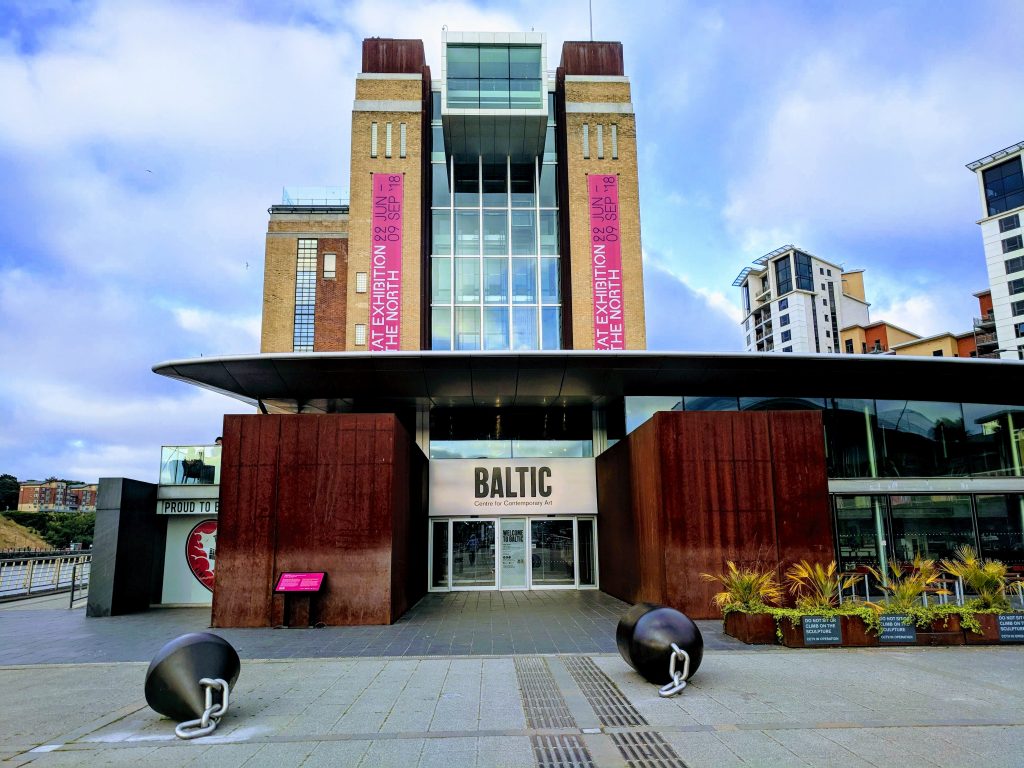 SIX at the Baltic Centre

SIX at the Baltic

Just before I came back to university I had a day out in Newcastle before going to eat at the Baltic Centre’s restaurant, SIX. I’d been previously with my mum, at the end of last term, but wanted to introduce my dad to the exceptional food (and to get him to pay for it). It is, admittedly, rather expensive, and so is probably only the kind of place you’d go for graduation or some other special occasion.

The restaurant sits on the top floor of the centre (a converted mill), and is long, wide and bright, with floor-to-ceiling windows all the way round, which give incredible views over Newcastle, Gateshead, and the Tyne. If you want to get one of the good views, however, you’ll have to book well in advance, as it’s a popular destination. You can specify which view you’d like though. If you don’t manage to get a window seat, you’d be just as good near the open kitchen, which sits at one end of the restaurant, and smells amazing. Given there weren’t many soft furnishings, I expected the room to become unbearably loud. Thankfully, however, it wasn’t too bad, and I could still have a conversation.

I ordered a Grapefruit Julep cocktail (£9) while I browsed the menu, which had an interesting flavour which began sweet, but had a sour aftertaste.  The Bramble cocktail (also £9) with gin, lemon, and the most intense blackberry liqueur I’ve ever tasted, was also wonderful. We also ordered a bottle of Yealands Estate Sauvignon Blanc (£33) which was good and dry, but didn’t quite have the complexity of, say, a Cloudy Bay Sauvignon. Items on the menu range from snacks such as Goat’s Curd Arancini with Pickled Walnut Puree (£5) to speciality dishes like Duck with Butternut and Bilberries (£60). As we’d arrived before 7pm, we could take advantage of the ‘small plate, large plate, desert for £25’ deal, which was excellent value given the usual prices of the food (£16-£20 for large plates). Although the waitress was friendly and attentive, it annoyed me that she said she felt the need to ‘explain’ the menu. I’m aware of how the general principle of eating works, thank you.

Anyway, for my starter, I ordered Griddled Purple Sprouting Broccoli, Lemon Aioli, Crispy Grains & Sumac (£7.50 without the deal). The broccoli was tender but still slightly crunchy, and the charred edges gave it a depth I can’t really explain. It was covered in parmesan shavings, which went really well with the whole dish. I’m pretty sure I got a garlic aioli rather than a lemon one, but who cares? It still tasted great and was good for broccoli dipping. The grains were indeed crispy, and so there’s not much to say about them other than that. Mum ordered the Autumn Salad of Jerusalem Artichoke, Smoked Duck & Stilton (£8.50) which was beautifully presented. I wasn’t allowed to taste it though; apparently it was too good to share. The North Shields Crab Salad, Tartare Sauce & Heritage Beetroots (£9.50) was excellent. The crab had an intense flavour and colour and was sweeter than I’ve had before. There was plenty of it, too. The beetroots were an interesting twist, and I would never have considered combining the two. It was a successful combination though.

I then had Herb Fed Chicken Breast, Chestnut Mushrooms & Rosehip (£20) which was full of flavour. The chicken was perfectly cooked, with crispy, lightly charred edges. The rosehip sauce was sweet without being overpowering. I’m not really a fan of mushrooms but these were excellent with a subtle flavour. The dish was accompanied by a mushroom mousse which was incredibly light, but also intense. Mum ordered Roast Hake, Spiced Pumpkin Purée & Smoked Shrimp Beurre Noisette (£17.50). The beurre was good; poured over the purée it created the stand out element of the meal. The smokiness was incredible (though there wasn’t much in the way of shrimp flavour) and the purée was smooth and sweet. The hake was also fantastic, flaky, and bigger than I was expecting. The Roast King Oyster Mushrooms, Cauliflower Cheese Purée, Cavolo Nero & Smoked Almond (£16) which my dad had, but which I didn’t try, was apparently excellent. As with all the dishes we had, the presentation was beautiful and colourful. 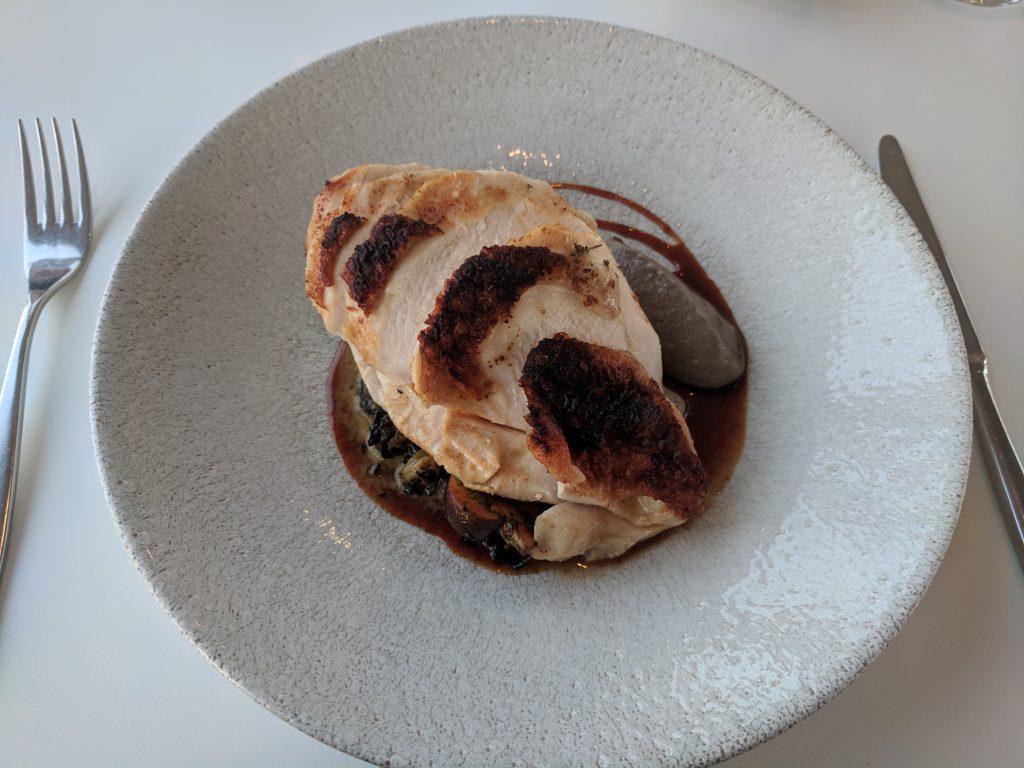 Dessert was Dark Chocolate Truffle Pavé, Peanut Butter & Banana (£8). There wasn’t much of the pavé, but that didn’t really matter, as the chocolate was incredibly rich. I wouldn’t have been able to eat any more, even though it was exceptional. The peanut butter was in the form of a glaze and sauce served on banana slices, alongside some ice cream, which had little pieces of peanut hidden away inside. It was creamy and smooth, and I would have been content just to eat that for dessert. My dad had Soft Cheesecake, Macerated Blackberries & Gilchester’s Rye (£7). The cheesecake was almost liquid it was so soft; it barely kept its shape on my spoon and was more like thick cream. It was stupendous though, with a slightly bitter aftertaste. The blackberries were also delicious. Finally, my mum had Roasted Pineapple, Pina Colada Sorbet & Caramelised Wild Rice (£7). It was like rice pudding, but drier and better. The sorbet was particularly interesting and did actually taste like the drink. 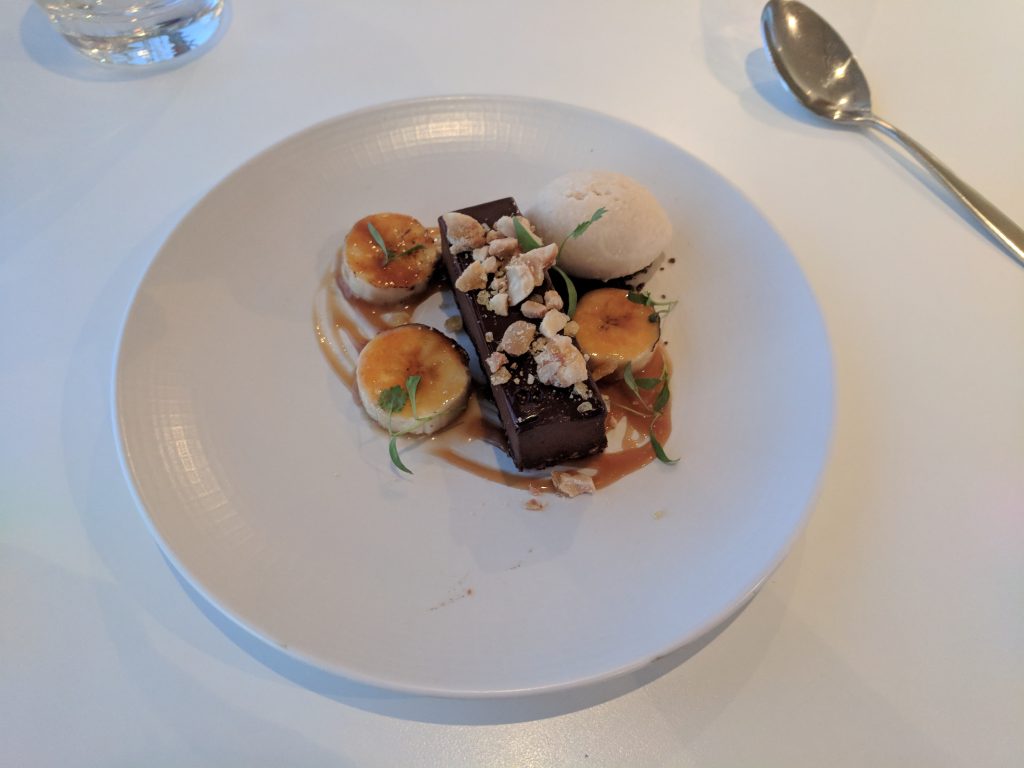 Even though we had to leave the table by 7pm, we never felt rushed. After the meal, the friendly reception we received when we entered continued, and we could sit in an enclosed observation deck for coffee, looking out onto the Millennium Bridge and Gateshead Sage. We arrived when it was still light, but left when it was dark, and so we effectively got two different views of the city, as lights came on along the waterfront. It was a superb end to my summer vacation, and I can’t recommend the restaurant enough.