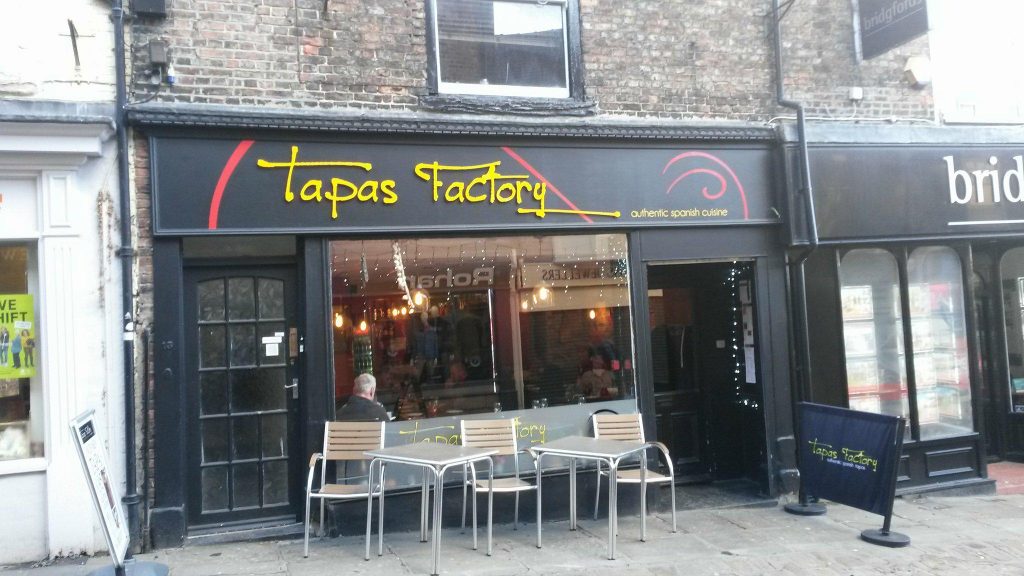 The restaurant is situated on Elvet Bridge

A few days ago, a group of friends and I decided to try out the recently opened Tapas Factory on Elvet Bridge after hearing good reviews. We booked for Monday evening, and it was surprisingly busy at 7:30pm when we arrived. We ordered a bottle of Tempranillo and browsed the menu. Although there was a large range of options including 14 meat, 11 seafood, and 10 vegetable tapas, we were struck by how unadventurous the dishes were. Perhaps this is a result of an owner aiming at an English audience. However, given that the head chef has flown over from Barcelona, one might have expected more originality. The menu was certainly not, as their website might have you believe, ‘stunning’. Perhaps I had set my expectations too high in believing that they might offer something radically different from the chain La Tasca just up the road.

The waiter was lovely, filling the small room with his presence. He was loud, fun, genuinely helpful, and accommodating when one of our group arrived late. We were not rushed to order food, and he made a pleasant change from some waiters who feel the need to get your order to the kitchen almost as soon as you have sat down.

When ordering, I was quite surprised that the kitchen had run out of ‘Padron’ peppers (£4.45), surely a staple of any authentic Spanish restaurant. No matter, we would instead have the ‘Berenjenas Gratinadas’ (aubergines with tomato sauce and cheese – £4.25). It turned out that they didn’t have enough of those either. However, they did have everything else we wanted, so we ordered quite a selection of dishes which took around half an hour to arrive and all came at the same time. The first tapa I had was ‘Revueltos de Chorizo y Patatas’ (potatoes scrambled with egg, chorizo, and red pepper – £4.35). This was very tasty; the chorizo, in good, thick slices, wasn’t too oily, the pepper was sweet and perfectly cooked, and the dish wasn’t filled with potatoes in an attempt to reduce the coat of the other ingredients. So far, so good.

However, the next dish, ‘Croquetas de Jamon y Queso’ (3 cheese and ham croquettes – £5.35) was disappointing. Though the outer coating was crispy, the inside was stodgy, rather than the light, fluffy texture one might have expected, and I could barely differentiate between the taste of the cheese and the ham. They nestled amongst a few dried-up salad leaves, which gave the impression the chef didn’t care about presentation. Next up was ‘Pollo al Ajillo’ (chicken with garlic, parsley, white wine and cream sauce – £5.15) The sauce tasted good, was quite rich and wasn’t too thin, and the chicken was flavoursome. What could have been a very good dish was partly ruined by the fact that it was tepid at best when it arrived, and seemed to have been waiting for service for quite some time. This is why I was surprised the food came at the same time; tapas usually arrives when each dish is ready, to prevent this very problem.

Next we had ‘Pan de Ajo (basically garlic bread – £3.25). There was nothing wrong with it, but it wasn’t particularly special either. It’s not hard to serve garlic bread after all. This was followed by ‘Brocheta de Verduras’ (Grilled mixed vegetables on a skewer – £4.45). These were cooked beautifully and tasted fantastic; I cannot find fault with them whatsoever. We also ordered ‘Paella Valenciana’ (paella with chicken, mussels, prawns, and squid – £5.25) as a tapa. It is also offered as a whole paella at £11.45. Again, this was a delicious dish. The rice was cooked well and didn’t stick together as sometimes happens. The flavour of each of the main ingredients shone through and the whole dish came together well. The same can be said of the ‘Paella de Carne’ (paella with chicken, chorizo, red peppers, and peas – £5.25). This was just as enjoyable, and I would recommend ordering it as a full paella in place of a few tapas dishes. It was arguably the best dish of the night.

Alongside this we had ‘Tortilla Espanola’ (spanish omelette – £4.25) and ‘Ternera con Champiniones’ (slow cooked beef in mushroom sauce – £5.75). These were reasonable, but nothing to write home about. Having eaten all these dishes, plus a few others, I realised my ‘Pulpitos Fritos’ (baby octopus with paprika and garlic mayonnaise – £5.75) had not arrived. It seems our waiter had forgotten to put that part of the order through. He was, however, very apologetic, and the dish arrived shortly after. Perhaps it would have been better had this not arrived. The octopus were bland and chewy, whilst the garlic in the mayonnaise overpowered everything else.

Overall then, a rather average meal partly rescued by a fun waiter and welcoming environment that adds little to Durham’s restaurant scene; a real shame given the prevalence of chain restaurants in the area.