Pandemic baking: a tribute to the humble scone

The simple joy of stepping out for a scone in a cosy café on a rainy day in Durham has been dashed due to this pandemic. Feelings of nostalgia have permeated society, with past football matches played on loop, Madonna and Mariah topping the charts and a decision to delve into my grandfather’s recipe book.

The uncomplicated, classic British scone was my Grandfather, Basil Bothamley’s piece de resistance. Every weekend morning, he could be found his fingers glued together with sticky dough putting one batch in the oven and taking another out. Nineteen kilograms of scones would be baked, sold, and ate every weekend from my mother’s little delicatessen in a small Derbyshire town.

Of all the great British delicacies, none is more polarizing than the scone. One sweet treat has never sparked so much controversy surrounding its pronunciation (rhymes with cone by the way). Or what came first the jam or the cream debate which has extended way beyond its original conception in Cornwall and Devon.

During a procrastinating session in the kitchen with my flat-mates, where we pined for a quintessential afternoon tea. It prompted me the ‘grandmother’ of the house to embark on baking my grandfather’s famous fruit scones for a snowy Sunday afternoon.

Extra pressure was placed on me by my Spanish friend as I did not want to give her a bad first impression of the British scone. It is true that the idea of a half bread, half floury cake does not conjure images of a scrumptious treat for those who are not accustomed to the humble scone. Yet it only took a bite for her to be persuaded of its beauty.

First a warning alert, if you are anything like the chaotic messy baker I am, prepare for a flour explosion and sticky fingers. Start with self-raising flour, which I forgot on my ingredient trip and prompted a dash to the shops, scared that my pokey car would not hold up in the icy conditions. Mix the flour with a teaspoon of salt and rub in 100g of margarine. Continue, until the consistency of breadcrumbs then sprinkle in 50g of sugar mixing in a clump of 100g of sultanas simultaneously. Precision is not my forte which leads me to tend to stick to cooking rather than the exact art of baking. My grandfather’s scone recipe is so inviting for me as with scones a handful there and a teaspoon here will not hinder the finished product.

Beat 2 eggs with 150ml of milk and add this to the mixture which allows you to start undertaking the therapeutic job of molding it all together. Fold and turn the wet mixture on a floured surface until smooth compact and clod-like. Whilst generic recipes suggest rolling out of 1cm in thickness, I took on grandfather’s advice and rolled to roughly 2.5 cm. Yet in typical student fashion, using my flat-mates half empty long forgotten about bottle of Nikita in the absence of a rolling pin. Then sharply cut into rounds, not wasting the trimmings and re rolling until all the dough is used up. Then place on a greased tray, brushing the tops with the left-over egg and milk. Do not worry about separating each one out as scones are unlikely to spread. Then bake in a pre-heated 200 degrees oven for 12 minutes until the tops are a golden glow. 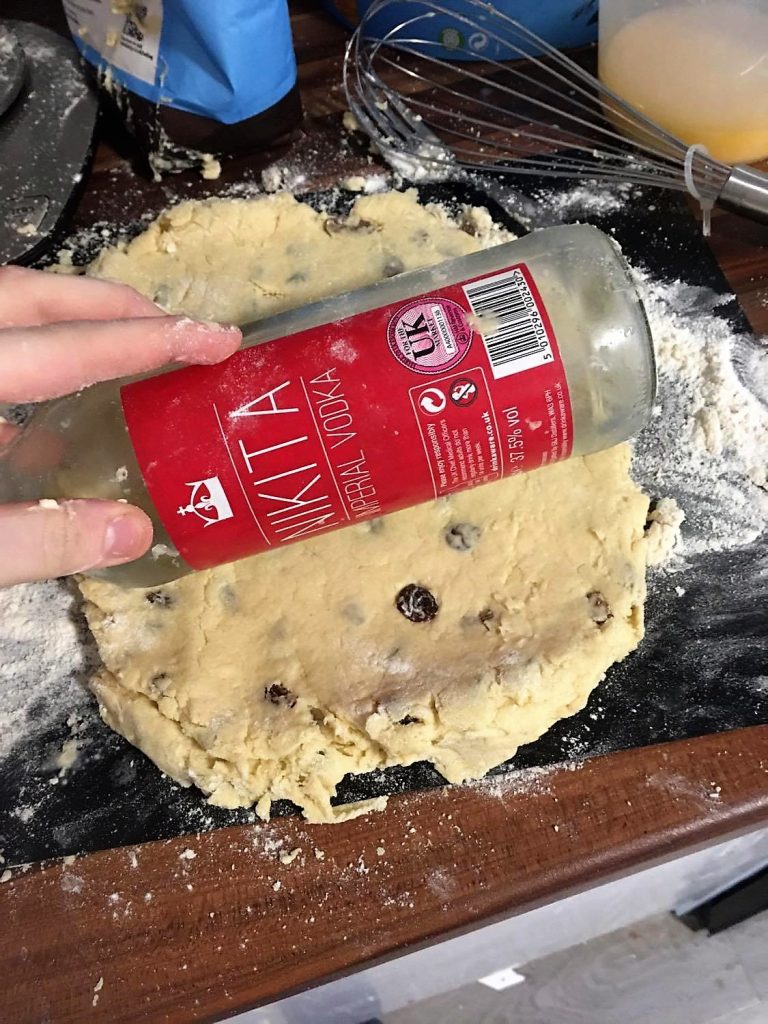 Make-doing with a Nikita rolling pin.

This recipe made about twelve and they were soon swallowed up by my friends, prompting me to whip up another batch.  Whilst yes you can just walk to the shops, grab some margarine stuffed scones and whack on a healthy dose of clotted cream and butter, nothing in my book beats scones fresh out of the oven.

My grandad had an experimental approach to scones, ranging from the classic cheese to a more adventurous prune and grated apple. The latter concocted after running out of dry ingredients on a busy bank holiday. This is the second beauty of scones, beyond their taste, that once you have mastered the basics you can start challenging your inner Heston Blumenthal.  Peanut butter and bacon scone anyone?