Oscars 2020: Politics of the Red Carpet

It is not uncommon for celebrities to utilise the exposure of a red-carpet event to make subtle political and philanthropical statements – the 92nd Academy Awards was no exception. Whilst there were several incredibly memorable moments of high fashion and couture coming from experienced red-carpet goers, including Billy Porter, Brie Larson and Janelle Monae, the most notable looks of the night tended to be those that made a political testimony of sorts.

One notable recurring theme among several nominees and industry veterans was the decision to utilise their choice of fashion and designer to make a statement in the name of sustainability and environmentalism. Joaquin Phoenix, who took home the award for Best Actor for his role in Joker, had previously established (and has so far stayed true to), his intention to wear the same Stella McCartney tuxedo for the entire 2020 awards season in an effort to reduce the waste that is increasingly associated with the fashion industry. Other attendees, including nominee Saoirse Ronan of Little Women, were explicit in their activism, explaining the reusable and sustainable aspects of their outfits to red-carpet interviewers.

Red-carpet activism through the medium of fashion was not limited to issues of environmentalism – Waad Al-Kateab, who directed the nominated documentary For Sama, wore a dress embroidered with an Arabic poem, translating to ‘we dared to dream, and we will not regret dignity’. The showstopping ensemble was admired for its message of hope, forward-thinking and optimism, themes that are crucial to Al-Kateab’s documentary which tells the biographical story of the challenges of raising a child in Aleppo during the Syrian Civil War.

The evening’s viral fashion moment came from Natalie Portman, who’s Dior gown and cape (designed by Maria Grazia Chiuri), became a central talking point in the days following the ceremony. In a subtle protest against the severe disparity in gender representation within the Academy and entertainment industry as a whole, Portman wore a cape embroidered with several names of female directors that were snubbed in the Best Director category. The embroidered cape referenced directors Lorene Scafaria (Hustlers), Lulu Wang (The Farewell), Greta Gerwig (Little Women), Mati Diop (Atlantics), Marielle Heller (A Beautiful Day in the Neighbourhood), Melina Matsoukas (Queen & Slim), Alma Har’el (Honey Boy) and Celine Sciamma (Portrait of a Lady on Fire). 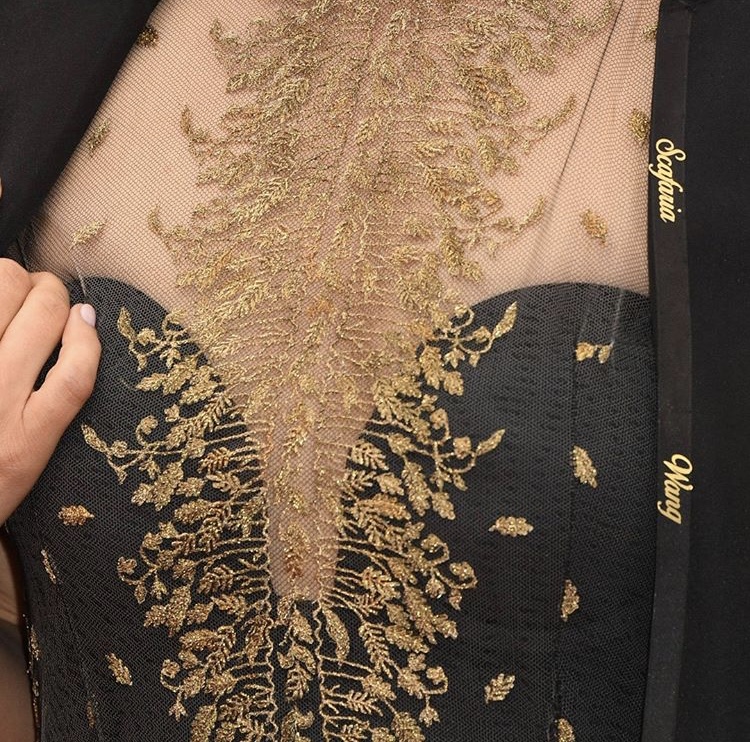 On the carpet, Portman stated her intention was to ‘recognise the women who were not recognised for their incredible work this year in my subtle way.’ The Academy has been subject to an array of controversy in recent years due to the failure to keep up with an ever-progressive entertainment industry – individual nominees for major categories, such as Best Director, have historically been limited in scope to white, male cinematographers. On the issue of gender alone the Academy’s record is appalling – only five women have ever been nominated for the award, with only Kathryn Bigelow winning for her 2008 work The Hurt Locker.

Although the message and sentiment carried in the cape of Portman’s ensemble are certainly dynamic and relevant, the dress has since been subject to some controversy in the days following the ceremony. Though the general field of cinematic entertainment does appear to be dominated by white men, it is important to acknowledge the increasing number of candidates from distinct backgrounds who are continuously emerging and subsequently diversifying the industry. On the evening of the 92nd Oscars, this was perhaps best demonstrated by the success of Parasite and director Bong Joon-Ho, who swept four Academy Awards including Best Picture and Best Director, alongside the success of Taika Waititi as the first indigenous man to win an Oscar, winning in the category of Best Adapted Screenplay for Jojo Rabbit. Whilst Portman’s dress certainly showed unwavering solidarity to women in entertainment and directing, her feminism failed in a test of intersectionality – she may have unintentionally undermined the successes of the men of colour who saw adequate representation for the first time.

And so, arises the question – to what extent is protest through the medium of awards season fashion a worthwhile act? It is important to acknowledge that Portman’s own film production company, Handsomecharlie Productions, in its production of eleven full length projects has only ever hired a single female director – Portman herself. Arguments have been made in favour of Portman working with more female directors, therefore becoming the change she wants to see, before engaging with performative protests. Should industry veterans with potential vehicles for change utilise their own tools before criticising the industry as a whole? The answer concerns more than a single individual’s capacity to make change – breaking into entertainment has historically been more difficult for women and minorities, and so it can be argued that we cannot expect immediate change without some level of superficial protest for the sole cause of raising awareness to the issue at hand.

Furthermore, the politics of fashion on the red-carpet concerns more than statements in support of certain causes. The operation of red-carpet events, much like the entertainment industry as a whole, tends to depend on the gender of an attendee. Historically, interviewers and media outlets tend to treat men and women dichromatically on the carpet, placing gratuitous emphasis on what female nominees may be wearing as opposed to recognising their achievements within the industry. If there is to be an unnecessary focus on female red-carpet fashion, surely Portman’s subtle statement has gone further than critics would like to admit. If interviewers of the Academy, and other award givers, fail to acknowledge women for their talents and continue to objectify them, focusing only on who they’re wearing as opposed to their cinematic achievements, Portman’s statement can be perceived to have worked in its full effect.

Overall, fashion at the 92nd Academy Awards did not disappoint – the politics of certain pieces were relevant as ever and generated worthwhile levels of discussion and awareness. As the 2020 awards season winds down, fashion fans can look back on a compelling season in political fashion, in which the Oscars remain significant as ever.