A Page or Two on Paradise

When I was a small, skinny seventeen-year-old (take me back to the ‘skinny’ part), I went to what I thought was the very edge of the world. My first trip outside of Western Europe, Western culture and Western comfort: a seventeen-day trip to Borneo in South-East Asia.

I had the time of my life.

We arrived and, as clichéd as it sounds, we were hit with the characteristic blast of heat that can only explode from an oven set to the highest temperature.  I felt increasingly overwhelmed as we drove into the city: we were pushed from the luxury of the air-conditioned bus onto the streets of Kota Kinabalu, a vibrant and somewhat scary city – to my inexperienced eye at least. I had a bit of a bumpy start: having never been so far from everything I knew and was comfortable with, tasks as simple as finding my mosquito spray in my Tardis-esque rucksack made my heart race. The food was also alien to my fussy taste- there wasn’t a single chicken nugget in sight, no pizza and definitely no chips. Stumbling through the buzzing streets in search of our first restaurant, my mind flashed with a thousand blurred images: schools of impatiently beeping cars, a hive of people who all seemed to know where they were going – moving twice as fast as my feet could take me – a restaurant advertising ‘shark-fin soup’ on a big neon sign – clearly but bizarrely the most popular restaurant around. Needless to say, I soon found myself crying into my noodles.

After the initial shock had dissipated, and I had slept off some of the jet-lag from the journey, the oppressive humidity 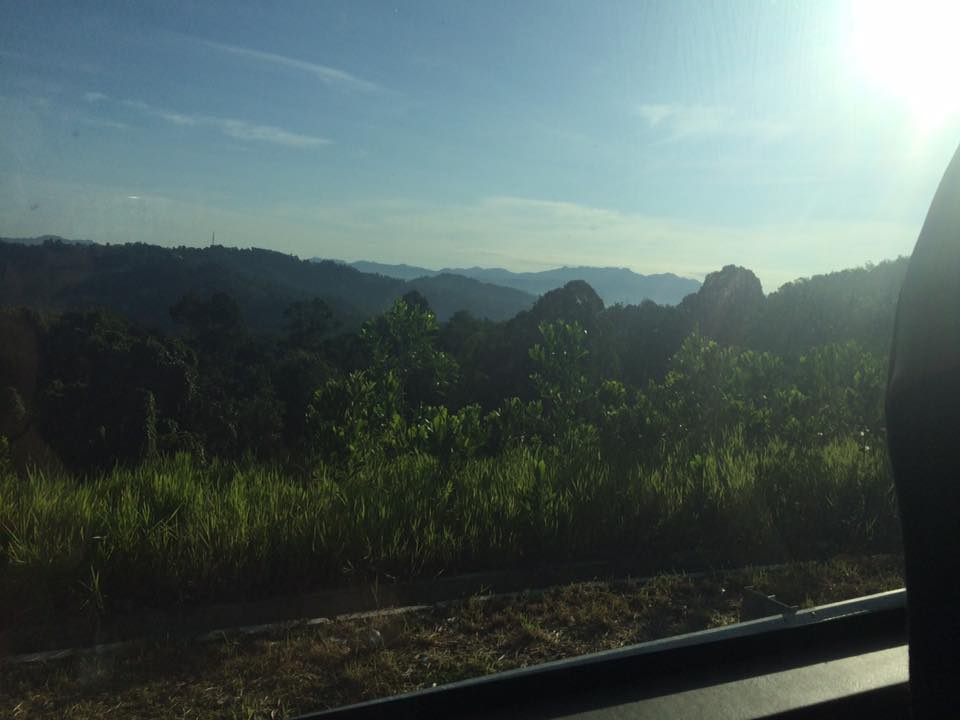 A photo taken from the bus.

gradually seemed to become less so. We left the city on a bus which rumbled through the land, carrying us away from the urban and towards the natural. As grey turned to green, I realised I had never seen trees so tall. For a while I took photos on my phone out of the window of the bus, mesmerised and determined to capture everything; it was all worthy of digital immortalisation, every little leaf. After a while, though, I put down my phone. I did this partly to preserve the battery, but partly because I just wanted to remember everything in my own mind, to notice every minute detail, however impossible that was. I did manage to notice some things in spite of the speed of the bus: the trees flashed by the side of the road, and then suddenly stopped flashing altogether. The deep, luscious green was replaced by an untarnished blue; the sky was a painting done by a child, utterly and unmistakably azure, complete with the brightest and most blindingly radiant version of the sun I had ever seen – I was almost unconvinced that it was the same, weak star I was used to seeing in Wales, so many miles away from that moment. Paradise isn’t perfect, though. The sun and the sky were visible only because the vast forest had been cut down, not just in places, but for never-ending stretches of the land. It seemed that there was no hiding humanity’s footprint on our world, even here in paradise.

The jungle that endures our stamping feet was (and is) breath-taking; I can only hope that we preserve it. I remember that there was always the buzz of life, a cacophony of music, complementing and contrasting other sounds, creating an intense polyphony that never slept. Everything I saw was so vibrant as to be overwhelming; I felt more existential and pretentious in that moment than ever before – and that is saying something.

We walked tentatively through the forest: at the risk of sounding repetitive and simplistic, I can’t help commenting once again on how tall the trees actually were. They were nature’s skyscrapers; New York must have got its nick-name from somewhere. We looked so strange, our necks craned so far up at and at such painful angles that we would often stumble on the creeping tree roots beneath our feet (this was probably a good thing – I didn’t want to see the creepy crawlies I was definitely stepping on). We were not and are not made for the jungle – unlike the monkeys, who swung so effortlessly, finding the energy to play-fight with each other, as if putting on a show for us clumsy, ground-ridden humans. Despite being surrounded by energy, the buzz and screams of millions of species, some yet to be discovered, there was a distinct feeling of loneliness, of awe and insignificance. It stunned us into silence: particularly so when an Orangutan crept up silently and just sat there next to us for a while, just staring. I didn’t have much time to think about this, though; every five minutes someone would shout ‘SPIDER!’ and we would spring into swatting action, or a shrill scream would issue from one of the group who had found a leech slyly ascending their trouser leg. There was not a dull moment in this forest of life and never-ceasing activity. 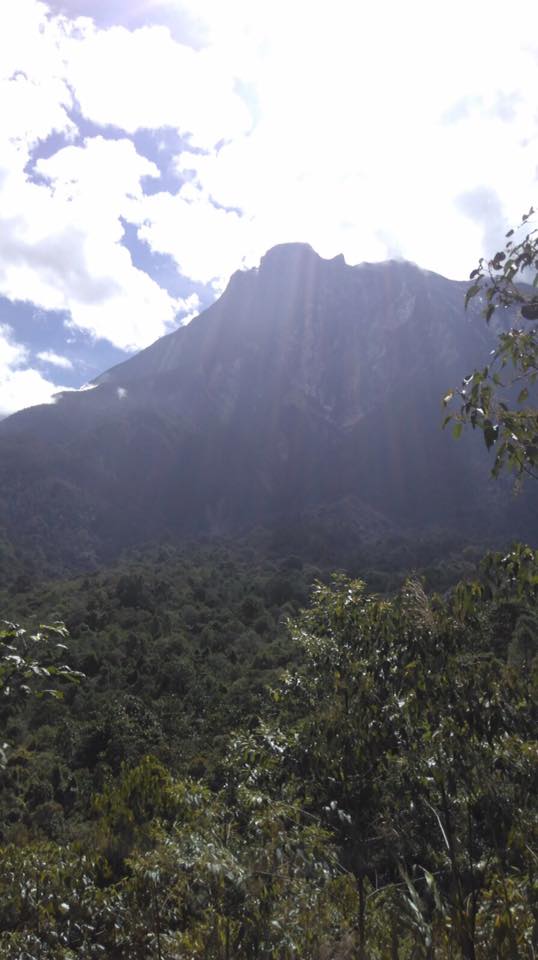 This trip proved to be a real learning curve, as I suppose these trips are meant to be. I learnt a little bit about myself: I could be determined, but only if I wanted to be. I strive every day to be as determined as I was to climb Mt. Kinabalu, which I and my entire group succeeded in doing. We pushed each other to climb that little bit higher, to take just one more step, until we were staring out at the beautiful country which I will always miss and long to see again. The view is not etched in my mind, but the feeling of seeing it is. It felt addictive. The sun crept up as we had crept up, and the sky became illuminated as my pride had. I will always crave that feeling of pure achievement. For a little seventeen-year-old girl, inexperienced in climbing mountains and in the world, the determination I showed in getting 13,000 feet into the air step by step will always motivate me and make me proud, as will the determination displayed by all of my friends. In writing this rather rambling piece and in taking my mind’s eye back to the place I loved the most and have missed the most, I realise that I must be determined to honour my good fortune at being afforded such a brilliant opportunity. In every aspect of my life, I want to feel as confident, as proud, and as capable as I did in these moments.

I am nineteen now and I have moved on in many ways from this time. I have moved to a University that is six hours away from my home; I am thinking about my future; I am being dragged by my feet into adulthood, only just succeeding in clinging onto the void which seems to exist between childhood and being all grown up. Time has gone on, as time has the tendency of doing.  Even my attitude towards these types of trips has shifted, but that’s a story for another time. For now, I want to remember Borneo for what it was for me: my first taste of paradise.