To Russia With Love – Gay and Straight

As the Winter Olympics begin in Sochi, the Russian authorities are determined to present an image to the world of a successful, friendly and welcoming nation. The illusion is somewhat shattered, however, by the government’s less-than-subtle erosion of human rights, and specifically their new anti-gay laws. The laws, that were introduced last year, ban the “promotion of homosexual propaganda” – in other words, it’s now illegal so say anything positive about gay people or homosexuality in Russia.

This homophobic law has led to the banning of gay couples adopting children in Russia, as well as fuelling some very disturbing hate crime. Most infamously, there has been an explosion in the popularity of “gay hunting” – where gangs of homophobes use dating websites (the “safari”, as they like to call it) to identify gay men and lure them to a flat with the promise of a date before viciously torturing them, often beating them violently and pouring buckets of urine over them, before posting a video of the event online for others to enjoy. Other lesser known, but no less disturbing, cases of gay hate attacks include the brutal murder of a gay man in Volgograd, the attack on a lone gay rights activist by a group of Russian paratroopers, and Russian MP Alexander Mikhailov calling for gay people to be whipped in public.

To most people reading this, I hope, this outrageous homophobia is disgusting. Surely the country is awash with angry protesters decrying this blatant attack on an innocent minority, you may ask? Well, no, not exactly. The Russian government crackdown on human rights goes beyond the LGBT (lesbian, gay, bisexual and transgender) community. Protesters in Russia must ask for permission from the authorities before being allowed to hold any kind of rally or public protest, and any applications from groups wanting to protest against government policy are generally refused. Anyhow, any brave people who do dare to protest against the anti-gay laws are quickly arrested under the “homosexual propaganda” law, as happened to four gay rights activists who unfurled a rainbow flag in St. Petersburg on the opening day of the Sochi Winter Olympics.

So, it seems that to show support for gay rights in Russia, one must be more subtle. Speculation is rife over whether the uniforms of two countries competing in the Winter Olympics are an example of just that: Germany and Greece. As most people know, the rainbow is the most internationally well-known symbol of gay pride and sexual equality, and therefore Germany’s multi-coloured uniforms and Greece’s rainbow-fingered gloves have caused a lot of excitement. Could they be a form of silent support for those currently suffering under Russia’s anti-gay laws? Quite possibly. The German Olympic Sports Confederation have denied it, but they could hardly admit it and have all their athletes arrested, could they.

Other forms of support for gay rights have been more overt and humorous. The Canadian Institute of Diversity and Inclusion have released an advert for the Sochi Olympic Games featuring two male luge athletes that has been described as “hilariously homoerotic” and “the gayest advert ever”. The advert ends with the words “The Games have always been a little gay. Let’s fight to keep them that way”. You can see it for yourself here: https://www.youtube.com/watch?v=effb2JYiKXM

Big company names such as Google and Channel 4 have expressed their pro-gay support in a more serious way. On the opening day of the Winter Olympics, Google displayed a rainbow-themed doodle on their homepage, with text taken from the pro-equality Olympic Charter proclaiming that “The practice of sport is a human right. Every individual must have the possibility of practicing sport, without discrimination of any kind”. Channel 4 has also changed their branding to coincide with the Sochi Games, changing their usually mono-coloured number 4 to a much more colourful affair.

In my opinion though, one of the most creative and beautiful channels of support to LGBT Russians has got to be the “To Russia With Love” website: http://torussiawithlove.no/ The website’s basic premise is that everyone who clicks on the “show your support” button paints in a coloured dot. Together, these thousands of dots (yes, you guessed it, in all the colours of the rainbow) form a mosaic that depicts the Russian nation.

The website has so far had over a quarter of a million people contributing their own “dot” which equates to 10 “coatings”. Above the multi-coloured image is the simple but powerful message: “Say no to abuse of basic human rights. Let’s paint Russia in rainbow colours and tell Putin the world supports equality”. 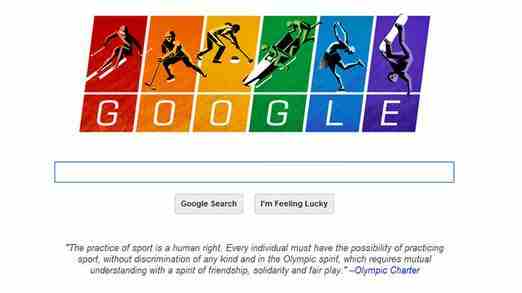 And this, basically, is the crux of the matter. If there is anything stronger and more indomitable than the Russian authorities’ message of hate it is the one thing they are trying so hard to destroy: love. People of all sexualities from all over the world are sending their love and support to Russia’s LGBT citizens and it’s a message that, with any luck, is getting through and giving them hope. Love is stronger than hate, every time.