The Country with Two Presidents

Sol Noya Carreno in Current Affairs World Affairs on 22 May, 2019.

For most countries, the question “who’s really the president?” would be an odd one–but then again, stability seems to be more of a memory for Venezuela. Five months ago, Juan Guaido, the head of the National Assembly, denounced Nicolas Maduro, the sitting president, as a usurper, and declared himself the acting president. Since then, the two men have been at a tug-of-war over legitimacy and presidential power.

At first sight, it would seem odd that someone who declared himself the acting president when the sitting one has been elected could ever be considered a legitimate president, but the picture becomes far clearer when the history of Maduro’s claim to office is inspected.

Although the National Assembly (which is currently dominated by the opposition and headed by Guaido) usually functions as Venezuela’s main legislating body, a National Constituent Assembly has the power to overrule the National Assembly. In 2017, Maduro unconstitutionally convened a National Constituent Assembly, and it has been filled with his stooges, to allow him and his supporters can effectively ignore the opposition.

In May 2018, Maduro won a second term as president in elections that were highly controversial for various reasons. Firstly, the date for elections was moved ahead at Maduro’s whim. Most of the opposition was either barred from running or fled Venezuela in fear of imprisonment. Maduro has also been accused of voter fraud: his government claimed that voter turnout was 46%, but the opposition has pointed out that the majority of the members of the National Electoral Council (the body in charge of elections) are government lackeys, and the one member who is not declared he would not recognise the results as “freedom to vote” had not been respected. The elections have thus been largely denounced as being anything but free and fair, and many countries have refused to recognise the results as legitimate. Still, he was sworn in and is now serving his second term. Venezuelan citizens have left the country by the millions, many of them walking across South America to Colombia and Peru (and don’t be fooled–South America is far larger than it looks on the Mercator’s map most of us have known since childhood).

Enter Guaido, at the end of January 2019. He pointed out that the Venezuelan Constitution states that when the result of an election is not legitimate, the head of the National Assembly is to take over as acting president. His claim to the presidency has been backed by the United States as well as many Latin American nations, and over 50 countries in total. On the other hand, Maduro can count the Cuban, Russian and Chinese governments among his international supporters. 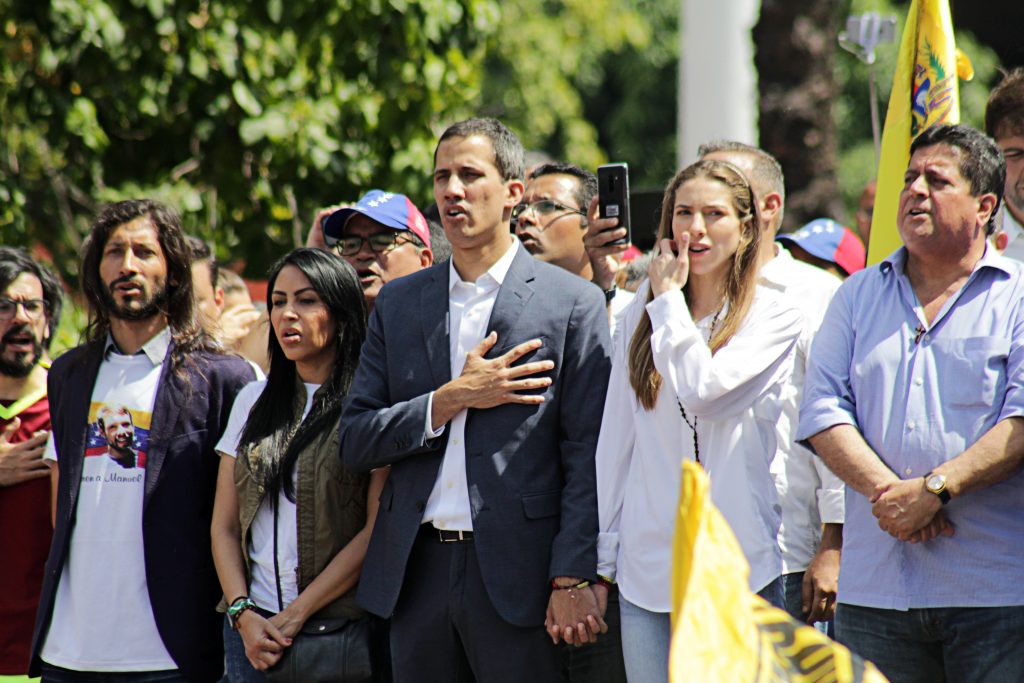 Three weeks ago, Guaido called for protests and it seemed like Venezuela was on the brink. Maduro stepping down suddenly became a far more real possibility, as Guaido claimed to have the armed forces on his side. But then, just as suddenly, the momentum died, and Venezuela’s downward spiral continued. Guaido has called for assistance from the US through his appointed ambassador, and Maduro and his government have denounced him for inviting foreign military intervention into Venezuela.

While the internal opposition to Maduro stands behind Guaido, the uprising many have hoped for has not manifested into reality. In practice, Guaido’s power was eroded by Maduro before Guaido challenged him. The armed forces could tip the balance in either man’s favour, but so far they have not done so and stuck to the status quo. Maduro rewards military officials in order to keep their support, frequently increasing wages for the armed forces and bestowing important positions unto officials (such as high-ranking roles in the control of key industries). According to the Ministry of Defence, Venezuela’s military bases are under government control and operating normally. Although Guaido’s promise of amnesty to members of the armed forces who declare for him does not seem to have swayed them, Guaido remains hopeful that they will turn to his side.

Perhaps it is a more worrying prospect for Mr Guaido that Maduro has suggested carrying out early elections for members of the National Assembly. Guaido has declared that such elections would be “a farce” and that he will have no part in such a display. He has also suggested that Venezuela will not know free and fair elections until Maduro is out. However, he may take comfort in the fact that Maduro has proposed such early elections before and not acted on the suggestion.

Currently, the two sides are engaging in talks in Oslo through representatives. There have been no face-to-face meetings yet, but it will be vital to keep a close eye on the developments. Neither man seems likely to back down anytime soon.