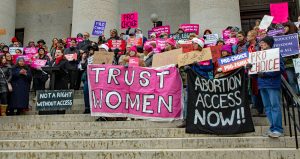 Last month, abortion was made illegal in Texas from as early as six weeks – before most women are even aware that they are pregnant.

Undoubtedly a draconian measure, concerned solely with exercising control over a woman’s right to choose, the ban in essence marks the end of Roe v. Wade – the landmark 1973 decision by the Supreme Court that ruled that a woman’s right to an abortion is protected by the U.S. Constitution – in the state of Texas.

Whilst the Texas Abortion Law is currently the strictest ban in the United States, it is now only a matter of time before other states follow suit, with twenty states having ‘trigger bans’ in place which would immediately criminalise abortion if Roe v. Wade were to be formally overturned. In the almost 50 years since Roe v. Wade was enacted, a woman’s right to autonomy over her own body has never been under as much threat as now. As Elizabeth Sepper, a law professor at the University of Texas, states: “Roe v. Wade is dead in Texas,” and “it’s really hanging by a thread for much of the rest of the nation.”

It is estimated that one in four women in the United States will have an abortion at some point in their lives, indicating that the impact of such a decision on women’s health would be nothing short of catastrophic. Put simply, limiting access to abortion directly harms women’s health. Preventing women from obtaining abortions from licensed medical professionals will do nothing to stop these procedures from being carried out, but will indisputably decrease the number of safe abortions performed.

Globally, around 22,800 women die each year and 7 million receive medical treatment for complications resulting from unsafe abortions. If the Supreme Court allows individual states to decide upon the status of abortion, it is estimated that 25 million women and girls in the United States would no longer have the right to end a pregnancy, regardless of the reason.

Abortion bans would likely mirror election maps, necessitating women to travel further in order to access abortions legally in other states which is not feasible for those who do not have the means. In the U.S, 75% of abortion patients come from low-income socioeconomic backgrounds, with 49% living below the federal poverty line, due to a number of systemic issues including a lack of, or limited, access of affordable healthcare and contraception. In cases such as these, when travelling out of state is simply not an option, women resort to drastic measures, turning to either underground abortionists or self-induced methods, both of which often have disastrous consequences.

Alternatively, these women often have no choice but to give birth to children that they either cannot afford, that resulted from rape or incest, or that they simply do not want, amongst many other, perfectly valid, reasons. It is at this point that many ‘pro-lifers’ would cite adoption as a substitute for abortion. However, this stance neglects the fact that adoption is not a viable option for all pregnant women. For example, carrying a baby to term could endanger the health of some women and the emotional impact of continuing with an unwanted pregnancy is not addressed.

Another issue at hand is what the fall of Roe v. Wade would mean for other aspects of reproductive health, for example by leading to limitations on the availability of, and access to, contraception. A worrying number of abortion opponents have already conflated the use of contraceptives to abortion, with the Missouri statehouse debating restricting Medicaid coverage of birth control in June of this year. In the same month Congresswoman Marjorie Taylor Greene declared that “the Plan B pill kills a baby in the womb once a woman is already pregnant”, a blatant lie that promotes dangerous rhetoric.

If this comparison of abortion and contraception persists, there lies a real danger that women’s bodily autonomy will be further restricted by simultaneously obstructing access to abortion and to birth control. The 1980 Hyde Amendment restricts the use of taxpayer money to fund abortion (except for in limited circumstances) and, if birth control is conflated with abortion, there runs the risk of funding for contraception being withdrawn or limited, which would do nothing but create a vicious cycle for women to face, with no access to either the means to prevent a pregnancy or the safe means to end one.