Protests In Chile: It’s Not The Place You Think It Is

The last time I wandered the streets of Santiago, two years ago, it was easy to forget that I was even in Latin America. Police violence; military control; state repression – these things didn’t seem to belong to this city.

Now, the reality is totally different; it is one that locals tell me has been coming for a while.

The first sniff that something was up came during my daily commute home. I turned a corner to see passers-by holding sleeves to their faces. Naturally, I followed suit, blinking away the now visible cloud that scratched at my eyelids. Once through, I asked those behind me what they believed had caused it, glad to finally be able to breathe freely again. “Tear gas,” they said with certainty, “to disperse the protestors.”

That was last Wednesday. Since then, things have got a lot more serious.

On Friday, the government declared a State of Emergency in the capital, following violent protests across the city. Two more of Chile’s major cities, Valparaíso and Concepción, did the same on Saturday, citing similar demonstrations. Fires were started at many of Santiago’s metro stations and armed police have been joined on the streets by the military to deter protestors, who nevertheless continue to cause havoc in and around the heart of the city. Tanks have been deployed and lengthy curfews implemented for all of the capital’s 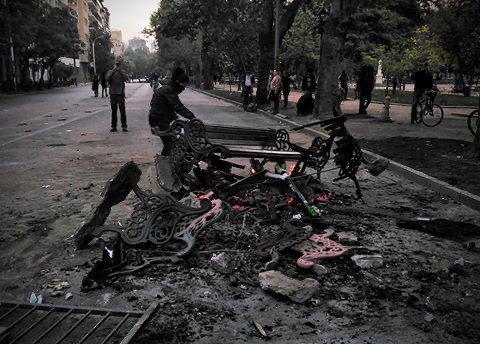 Fig. 1 Masked protestor amongst charred remains of barricade. Photograph taken by Will Guy.

residents. All the while, retail stores, big and small, continue to be looted and burned to the ground.

At least eleven people have so far been reported killed by the flames, but many more on all sides have allegedly been injured amidst the chaos: some by rubber bullets and some, as others claim, by live rounds. Protestors share videos online showing unnecessary police brutality, serving to incite yet more fury…

How can we begin to make sense of this?

Remembering Chile the way I saw it two years ago, its current state is almost incomprehensible. Since the fall of the Pinochet regime nearly 30 years ago, Chile has risen to prominence above many other Latin American nations as a beacon of purported stability and democracy. Indeed, many Chileans had begun to believe the same – they were proud of how far their country had come, despite the well-known inequalities that are far from unique to this country.

The Bachelet and Piñera governments had successfully convinced themselves (as well as the rest of us) that their country was more stable, more progressive and more firmly established in the 21st Century than even their neighbour and rival across the Andes, Argentina.

The system seems to be rotten. If you’ve heard anything at all about the current demonstrations, you’ll have probably learned that they erupted after a micro-rise in ticket prices for the metro network (to the equivalent of $1.17 – or 90 pence). That’s how some members of the media have construed it, constructing a logical argument that places the blame squarely on the shoulders of “higher energy costs and a weaker [Chilean] peso”. Besides, the prices are nothing compared to the London Tube! As readers, it’s implied that we can only mourn the poverty that drives these people to protest.

However, by naïvely focusing on trivial metro costs, these journalists completely miss the point. Rises in public transport costs are just the tip of the iceberg for the discontented masses, whose quality of life has been continually hit by miserable wages, ever-more-costly education, and corrupt officials, amongst a multitude of other grievances.

People are demonstrating so aggressively because they’ve got nothing to lose: they’ve been forced to pay crippling taxes that simply vanish into thin air. To make things worse, it is these very men who have cheated them before that are now sending a mass of tear gas, smoke-bombs and (rubber?) bullets their way in a concerted attempt to shut them up.

Unfortunately, as was the case during the London Riots of 2011, common thugs have taken advantage of the confusion and lack of police presence in some areas to loot department stores and ransack property. As a result, all protestors are being dubbed “vandals”, “criminals” and “delinquents” by some, including by the British media, in an attempt to dismiss the demonstrations as the work of anarchists. All of this to try and maintain Chile’s global image as a progressive democracy.

But why should Chile be viewed as ‘special’ any longer? Sky News published an article on Sunday that connected the protests to those that took place in Hong Kong, Lebanon and Azerbaijan over the weekend. In the article, protests in each of those three countries are attributed to government corruption and a lack of democracy; reflecting the readership’s readiness to accept Chinese, Islamic and former-Soviet states as inherently corrupt and anti-democratic.

Again, however, in the context of the Chile protests, there is no mention of anger over corruption scandals or autocratic behaviour. Instead, the author chooses to focus solely on “frustrations over the high cost of living” and “public transport fare increases”.

Why are popular concerns in Chile treated any differently to those in other parts of the world? Yes – Santiago will host COP25, the annual UN conference on climate change, as well as the meeting of the Asian-Pacific Economic Cooperation in the next couple of months (that is, as long as the protests do not interfere). These events, however, should not be considered as proof that 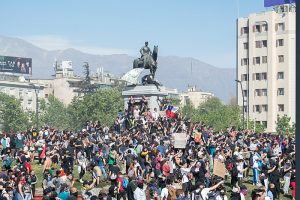 Chile is now immune from the fraud and extortion that racks many other countries in the region, and indeed the world. Anyone on the streets of Santiago could tell you that.

The media needs to re-think the way it reports on Chilean affairs. Recent events prove that Chile isn’t quite the place it’s made itself out to be. We should not continue to pretend that it is.