Paris: some thoughts on Europe and our struggle with terror 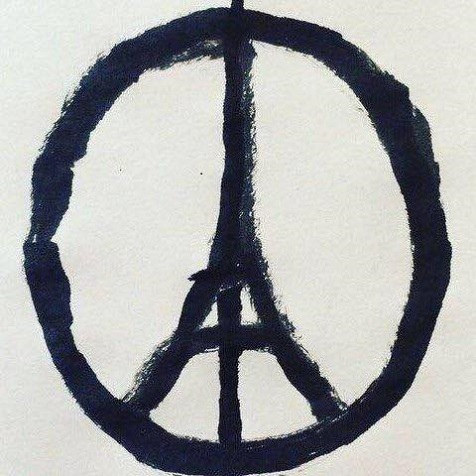 Worldwide, people have shown solidarity with Parisians through this symbol combining the CND logo (a universal emblem of peace) with the Eiffel Tower.

Again, Europe has been shaken to its core by brutal terrorism, of the most horrifying nature. Innocent civilians were murdered as they tried to enjoy a Friday evening in central Paris. Gunmen apparently executed hostages one-by-one at the Bataclan concert venue, in a display of merciless hatred. Footage showed fathers wearing football scarves and trying not to cry in front of their sons, as they carried them out of the national stadium following an attempted bomb attack. The death toll had reached 127 at the time of writing; this was a massacre.

Daesh (ISIS) has claimed responsibility for the attack, portraying it as a response to French air strikes on its positions in Iraq and Syria. The French government has implemented emergency measures – closing borders (apparently in a bid to prevent suspects from fleeing the country), and declaring curfews (for the first time since 1944, when Paris was under Nazi occupation). There have been reports of raids on a Brussels neighbourhood where at least some of the suspects, seven out of eight of whom died by detonating bombs on themselves, are thought to have resided, and arrests have been made. Meanwhile, messages of solidarity and condolence have poured in from around the globe, and in Paris “small acts of heroism” have abounded, with some people queuing for hours to give blood.

But, what now? One suspect’s body was found with a Syrian passport which was recently registered passing through Greece. Although it was unconfirmed whether the passport actually belonged to the deceased gunman, there is a risk of dire consequences for those genuinely fleeing for their lives. Already, hysteria has crawled out of some corners of the internet, calling for all refugees to be ‘rounded up’, and for Europe to be put on ‘lock down’. Poland today used the events in Paris to justify its withdrawal of consent for a European quota scheme to distribute refugees. The possibility that among recent arrivals to Europe there are trained militants, dedicated to carrying out suicidal attacks here, is a chilling prospect, a prospect we need to consider as we handle the refugee crisis. But a spiral of harsh reaction will have terrible consequences of its own. What of the Syrians who came to Europe believing that we hold true to our universalist values? Where else can they turn but against us, if we simply push them away? And what of our own minorities – what about France’s five million Muslims? Will saying “close the borders to any new refugees fleeing persecution, because Muslims cannot be trusted” do anything but alienate them? Rash actions which marginalise our minorities only take us further from peace and harmony.

In the wake of the terrible attacks on the Charlie Hebdo offices, . It is not enjoyable to have to address people in mourning, people in shock, and urge them to exercise restraint. But it must be done, because of those who seek to politicise these events. Tom Dunn, The Sun’s political editor, tweeted: “People asking how would bombing in Syria help: because evil triumphs when good men do nothing”. I know some people will see that, alongside the images of bodies scattered in the street, and think “yes, it’s time to respond”. But Dunn’s statement is patently flawed. His reference to “when good men do nothing” denigrates all who have offered assistance to people fleeing persecution in the Middle East. More than that, the entire line is oxymoronic. Are we still “good men” when we are “bombing in Syria”? It is through wilful ignorance and oversimplification like this that we commit our own banal evils. Far away from Western Europe, bombs will fall on Syria and Syrians will die, and their friends and relatives will seek revenge, just as the attack on Paris was an act of vengeance. What then? Do we carry on bombing in perpetuity? This is the logic of Dunn’s statement. Personally, I am undecided on whether allied airstrikes against the Islamic State are warranted in certain specific situations. But I am sure as hell convinced that such a decision cannot be taken on the basis of people deploying a platitude about “good” and “evil”; a platitude which paints dropping bombs as a clear method for the triumph of “good”.

No. We are not the only ones facing terror. It should scarcely need repeating, but the majority of victims from terror by these so-called ‘Islamic’ extremists, have been Muslims. Just the day before the attack in France, Daesh suicide bombers devastated Beirut, Lebanon, ‘the Paris of the Middle East’, killing dozens of civilians in response to the participation of Shia Hezbollah fighters in the Syrian civil war. I do not claim to have all of the answers to the phenomenon that faces us – in fact, I say we should be suspicious of anyone who does. This is, I think, what Jeremy Corbyn means when he argues for “dialogue” rather than bombs. We need to speak to Muslims at home and to Muslims fleeing persecution in the Middle East, to come to understand what is going on, rather than assuming that we know how to defeat this extremism. How can we help our friends in the Middle East eliminate the tyranny of Daesh? How can we stop minorities at home from becoming marginalised and succumbing to the kind of violent extremism which has metastasised among European Muslims? Given that France has already dropped thousands of bombs on Daesh targets over the past months, I am of the opinion that simply dropping more is unlikely to do anything but multiply the threat; this is all we have been doing for 14 years. No. Right now we must mourn the dead and send our love and whatever help we can to the victims in France, Lebanon and elsewhere. But our long-term actions require reflection and careful consideration.