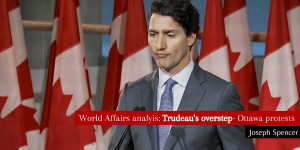 “The situation is no longer an emergency. We are confident that existing laws and bylaws are sufficient to keep people safe”. These are the words of Justin Trudeau, Candian prime minister, who announced on February 23, 2022, the end to the use of emergency powers, implemented for the first time in their existence in response to the clash between authorities and ‘truckers’ over the government’s vaccine mandate.

The implementation of the Emergencies Act has provided the Canadian government with sweeping powers, including to impose bans on public assemblies, restricting travel to protest areas, and freezing bank accounts.  On 19 February the federal government announced that it had already frozen 76 accounts. In total, these emergency powers were in place for nine days and appear to have been a success. The truckers blocking key roads in Ottawa have now been dispersed and the ‘illegal’ protests have ended.

Despite the measures being approved by parliament a week after Trudeau implemented them, he has attracted widespread criticism for what has been seen by many as a disproportionate reaction to a largely peaceful protest.

Conservative leader Candice Bergen described the use of this law as an ‘ideological attachment to keeping Covid restrictions and mandates’. Meanwhile, the Canadian Civil Liberties Association condemned the use of the Emergency Act as ‘unconstitutional’. It expressed concern over the precedent set by using these powers and claimed that the government ‘did not meet the legal thresholds set out in the Emergencies Act’.

Indeed, it is dubious as to which of the four possible criteria upon which the act can legally be invoked Trudeau is appealing to. In his announcement of the implementation of the powers, he describes the protests as ‘illegal blockades that have been disrupting the lives of many Canadians’, inflicting economic damage on local businesses and involving the harassment of Canadians in the neighbourhood. Regardless of whether one accepts these allegations, it is a stretch to suggest that the blockade of roads ‘seriously endangers the lives, health, or safety of Canadians’, or ‘seriously threatens the ability of the Government of Canada to preserve the sovereignty, security and territorial integrity of Canada’, the two definitions of a national emergency stipulated in the Act. 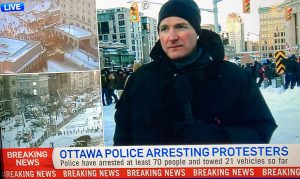 Above: A Canadian news broadcast documents the unrest in Ottawa, February 18, 2022.

The diversity of media portrayals of the protests is emblematic of the deeper cultural divide that they represent. Allegations have emerged of the presence of far-right extremists at the protests, including the appearance of swastikas and public urination on war memorials. Indeed, the Ottawa Police Chief went so far as to label the protests ‘nationwide insurrection’. In contrast, interviews of protesters themselves indicate a different set of priorities. Speaking to independent journalist Rupa Subramanya, Sikh immigrant Kamal Pannu expressed the economic difficulties he and his wife had experienced after being blocked from larger grocery stores such as Costco due to his vaccination status. A Ukrainian trucker also complained of the curtailing of freedoms that coronavirus restrictions had brought about, suggesting that he and his fellow protesters were ‘fighting for our freedom’.

Certainly, any presence of white supremacy in the protests deserve widespread condemnation. However, the conflation of this with the genuine concerns expressed by some of these protesters, and the hard-line approach taken by Trudeau in his invocation of emergency powers, risks exacerbating this sense of repression among protesters.

When Extinction Rebellion protests took place in Canada last year, police responded without the need of these emergency powers. After seven protesters attempted to block the Granville Street Bridge in May, local police arrested the protesters on the basis that this was ‘a critical piece of infrastructure’. Certainly, readers would not be amiss to feel greater sympathy for a protest against the climate crisis compared to protest against vaccine mandates. However, when both groups were engaging in similar tactics, the use of emergency powers against one and not the other suggests that Trudeau’s issue with the truckers is the content of their complaints rather than an actual security threat. This selective use of emergency powers sets a dangerous precedent.

‘While the immediate emergency situation is over, this issue won’t just go away’, said Trudeau, following his decision to revoke the Emergency Act. The truckers, sent home after weeks spent protesting against what they saw as the denial of their freedoms, are bound to agree.