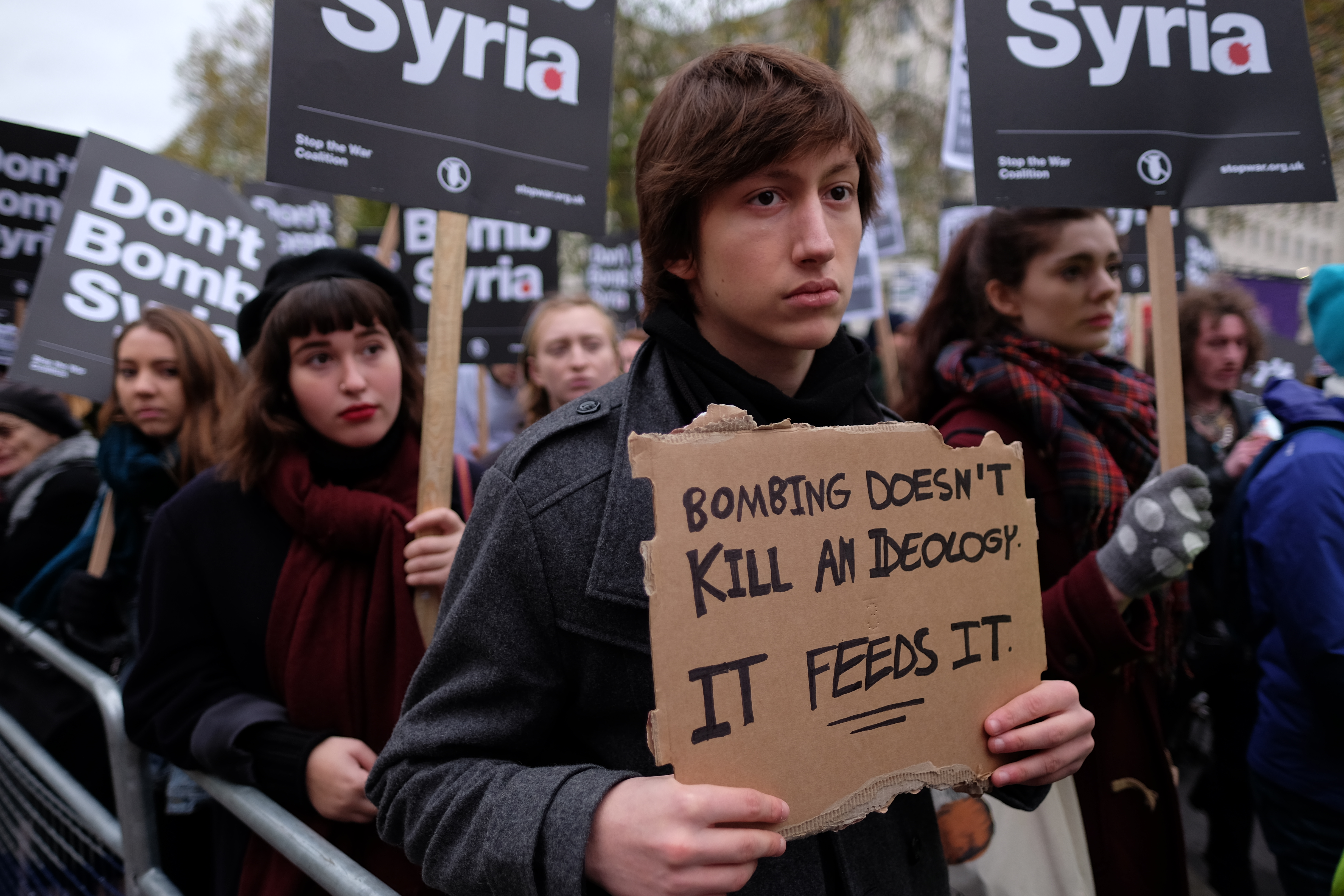 Hilary Benn’s exhortation on Syria to the House of Commons on December 2nd has been hailed as a rhetorical tour de force. In the climax of his speech, Benn invoked the internationalist credentials of the Labour Party; Isis were fascists, so far outside of our consensus that a show of force was the only remedy. Temporarily leaving aside the intricacies of the rights and wrongs of coalition intervention, it is worth considering the mobilisation of the concepts of internationalism and ‘fascism;’ they also cropped up in Labour MP Dan Jarvis’ speech to the House. In the case of the Shadow Foreign Secretary, the twin concepts were clearly meant as an argument-clincher: who would vote against the destruction of fascism? The answer to that question has determined British policy on Syria and Iraq for the immediate future.

One of the most historically-grounded responses to Benn has come from a commentator many might not usually agree with. Peter Hitchens repeated Orwell’s prescient advice: ‘The word Fascism has now no meaning except in so far as it signifies “something not desirable.” ’ There is a long history of using the label ‘fascism’ to clinch an argument, often with fatal results. The German Communists, following Stalin, construed German social-democracy as ‘social-fascism,’ resulting in the left failing to unite against Hitler. ‘Fascist’ was Stalin’s go-to classification for those who opposed his infallibility. Trotskyists were fascists, as were the POUM (the non-communist socialist militia Orwell fought with against Franco). In case there is room for doubt, nobody would suggest Benn is in any way equivalent to Stalin: it would be pointless to replace one nonsense historical analogy with another. The salient observation is that labelling someone as ‘fascist’ has a long history of being used to exclude political opposition. Like the German Social-Democrats, international Trotskyists, and the Spanish POUM, Isis are not really fascists.

Fascism is a vague concept. A unifying feature is an ideology involving the transcendence of societal divisions (ie class) in the name of an aggressive, violent nationalism linked to a nation state. Isis acquire territory and build organisational structures, but not in the name of ‘the people’ or a sacred patria: there is no real ideological resemblance to Mazzini, Garibaldi, or any other classical nationalist, never mind fascism. They commit monstrous violence, and this is the only facet of the ‘fascist’ label that stands up: peace is rejected as a matter of principle, and this fanaticism touches on a certain totalising, irrational sentiment reminiscent of fascism in a very broad sense. Nationality is also not entirely irrelevant to Isis – part of the ‘rationalisation’ for the Paris attacks was specifically French involvement in previous coalition airstrikes – but the root grievance is religious difference; the French are the ‘lead carriers of the cross.’ Isis transcend nationality. They share fascism’s impassioned fanaticism, but are not really fascists in any meaningful sense of the term.

‘The reality is that the Islamic State are Islamic.’ As the academic and journalist Graeme Wood has pointed out, their acquisition of territory is based in Sunni law; a caliph must have ‘amr, authority. Christians in Isis territory pay jizya, a special tax, in order to live, a policy justified in scripture. A major variance between Isis and Al-Qaeda is theological dispute over the difference between an apostate and a sinner. It has been suggested a kind of reverse Orientalism underlies our understanding: if religion does not matter in Europe or America, we have problems conceiving that it might matter in Raqqa or Mosul. It should be stated that it is a huge jump from this observation to blaming all Muslims. As the Facebook meme goes, moderate Muslims have about as much responsibility for Isis as British Christians do for the KKK. This should not obscure the fact that the ideology of Isis consists of a particular interpretation of Islamic scripture. Throwing around the word fascism is an inaccurate distortion. Potential solutions – security for Sunnis in Iraq and Syria, combined with attempts to propagate a move away from literal interpretations of sacred texts? – are not to be found in the history of the Second World War.

It might be argued that this does not really matter. Whatever their ideology, Isis are beyond the pale, whether defined by a sense of the superiority of the European Enlightenment, back on track after the unfortunate interruption of the twentieth-century, or more modest support for the post-1945 (theoretical) commitment to democratic peace. The reason it matters whether fascism becomes merely a by-word for monstrosity is because the emotive implications of that term can stifle debate. Benn’s speech contained substantive arguments; using the term ‘fascism’ detracts from them. Anti-interventionists have also come in for criticism for subverting debate. The abuse – including death threats -given to MPs voting in favour of bombing is wrong. An instinctive feeling that if individuals are prepared to vote for killing and maiming then they should be able to put up with a bit of Twitter castigation might feel right in the gut, but does not stand up to cursory scrutiny. Abuse is unpleasant, counter-productive and potentially criminal. But there are two sides to the story. Benn’s highbrow grandiloquence does just as much to suffocate debate; probably more so, given the impact his speech has had. It is part of a wider problem.

Our PM, for example, notoriously referred to ‘terrorist sympathisers’ among the opposition. Putting aside Cameron’s usual casual hypocrisy (on the subject of bad decisions made in the 1980s, presumably his all-expenses-paid ‘sanctions busting jolly’ to apartheid South Africa suggests he sympathises with the cause of white supremacy?), it is perfectly plausible that the remark was intended to refer to Corbyn and McDonnell’s stance on the Provisional IRA; but at a time when MP’s were having to wrestle with their conscience regarding a decision involving innocent lives it was an unfortunate rhetorical choice, to say the least. The slickness of Cameron’s usual act – carefully calibrated to suggest that his chosen course of action, no matter how contradictory, convoluted, or controversial, is the option any properly-educated chap would take: it is the right thing to do’ – suggests that it might have been deliberate. A risk worth taking to ensure the vote went his way.

This polarisation of debate is regrettable. Accusations of ‘fascism’ have been slung around before. Nick Cohen, hammer of the non-interventionist left, described Saddam as fascist in 2003. As Peter Hitchens suggested, perhaps that was then a clinching argument for Benn: he voted in favour of invasion, and stated he did not regret that decision in 2007. Theorising about the rights and wrongs of the current intervention obfuscates the essential truth that Iraq and Syria are in such a state of bloody chaos nobody really knows what might happen. What we do know is that wars in Afghanistan, Iraq and Libya have cost hundreds of thousands of lives, for – at the very best – ambiguous results. We were encouraged to bomb Assad in 2013; we are now bombing his opponents. In a crisis as murky as this, rhetoric doubting the integrity of political opponents, or inaccurately invoking fascism, is better left on the shelf.