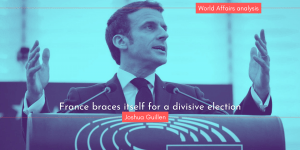 France is at a crossroads. This Sunday, with war raging in Ukraine and the state of European democracy uncertain, the French electorate will deliver its first verdict in what could quickly become the most consequential electoral decision in recent history. Yet the effects of this month’s presidential contest will determine far more than the next occupier of the Elysée Palace—it will shape the political future of continental Europe. To understand why, it is first necessary to examine the contexts of this weekend’s vote.

In what is widely expected to be a marginal affair, Emmanuel Macron, the incumbent, and Marine Le Pen, the de facto challenger, will likely be the two nominees chosen this Sunday to contest a run-off election on 24th April 2022. The first round, held this weekend, will prefigure much of the prevailing campaign; as the sitting president, Macron must balance the demands of an escalating geopolitical crisis with the polemics of electoral politics. A closely divided vote on Sunday could—and most likely will—severely obstruct his ability to do both. It would also have the dual effect of empowering the resurgent Le Pen who in recent weeks has seen her message gain resonance across the most impoverished regions of France. Importantly, despite the antagonism of the more radical Eric Zemmour, her campaign has been relatively apt in highlighting the shortfalls of a distanced and distracted Macron. The tightening polls reflect this.

Yet, paradoxically for the president, his war-time bounce has been relatively minuscule; while voters broadly support his management of the crisis, they appear to place more salience on his economic credentials—something they assess to be a weakness of his. Le Pen, to her credit, has seized on this perception. In recent weeks, the cost-of-living crisis has been as the forefront of her campaign, allowing her to boost her fiscal credibility at the expense of the flagging Macron. Crucially, however, it has also broadened her appeal to the fragmented coalitions of the hard-left; economic priorities, such as generous tax cuts and a more expansive welfare system, are of increasing importance to poorer ‘rustbelt’ voters.

This amounts to a tragedy for Macron. Much like Joe Biden, the president of the U.S., the French leader has failed to communicate his relatively strong economic record to voters. His administration has overseen an economy that has vastly outperformed its European allies, softening the fears of parachuting inflation and aggravated economic drag seen elsewhere. Ironically enough, his reputation as a banker leaves him in short change; the charismatic Le Pen appears all too ready to profit from his ‘bourgeois’ financier background. 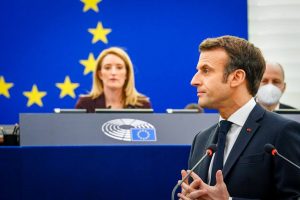 Image 1: Emmanuel Macron has long seen himself as a leading figure of the EU. Re-election certainly would bolster his position.

Despite weakening poll numbers, however, Macron remains the favourite to edge both the first-round and run-off ballots. The probability calculus of The Economist has long given the incumbent a strong edge over Le Pen—even as polls continue to narrow in favour of his rival. There is still good reason for optimism for the incumbent. On a primarily personal level, he is vying to become the first French president in twenty years to win re-election; second, following the departure of Angela Merkel as the chancellor of Germany, the European Union has a vacuum of leadership. Macron has long marketed himself as a natural heir to Merkel; a victory would give him the momentum to assume such a mantle ahead of Olaf Scholz, the new German leader.

Crucially, as the invasion of Ukraine drags on, the ambitions of Macron seem to fit the wider desires of Europe. His long-term aspiration for the European Union to achieve strategic autonomy was once the subject of mockery; it now seems to be both prescient and increasingly attractive. The territorial concerns of member states, notably among the bloc of ex-Soviet eastern European nations, have animated policy makers to consider a new epoch of EU integration: that of armament and defence. How this will be achieved is unclear. Yet, deepened alignment would be fundamentally contingent upon Macron winning in April. 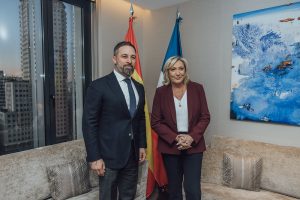 Image 2: Le Pen meets with a fellow far-right leader, Santiago Abascal, of the Spanish Vox Party. She has harboured an ambition to create an ‘EU of the far right’.

There are two reasons for this. A Le Pen victory would be dangerously disruptive: not only does she harbour stringently Eurosceptic views; she has previously committed herself to creating an ‘EU of the far right’. With the recent re-election of the Hungarian prime minister, Viktor Orban, alongside the ascendency of European illiberalism, the EU can ill-afford to be further infected by the bullish authoritarianism of the radical right.

Second, a Le Pen presidency would raise questions about international allegiances. Would she seek closer ties with despots and strongmen? Such a scenario is hardly unimaginable; she has a history of expressing admiration for Vladimir Putin, the Russian president. The implications for European and world democracy would be startling. France is not just a member of the EU—it is a part of Nato, the G7 and the G20. At a time of global instability, the west—and European security—could hardly afford such a shock.

What this two-round French election demonstrates, however, is the flaws of conventional western dogma. Le Pen only exists through virtue of the fact that poverty and social immobility are so deeply engrained in the modern liberal democratic experience. Yet, whatever the result this April, a worldwide reality is already transpiring. There is—and will continue to be—a reckoning between democracy and authoritarianism. How France votes this April may well indicate the direction of travel.